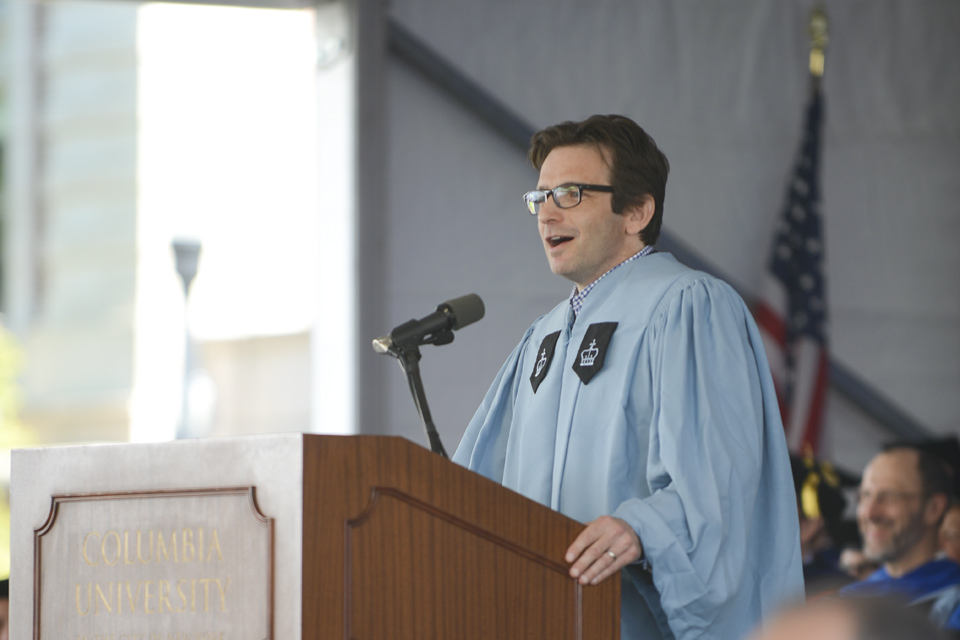 Academy Award-nominated screenwriter Dan Futterman, CC 89, said in his CC Class Day speech that graduates should be open to setbacks and let themselves be propelled in unfamiliar directions.

Screenwriter Dan Futterman, CC '89, encouraged Columbia College's class of 2014 to be open to setbacks and let themselves be propelled in unfamiliar directions.

At his speech during Columbia College Class Day on Tuesday, Futterman, the Academy Award-nominated writer of "Capote," said that graduating from Columbia came with both privilege and responsibility—adding that the University has diversified greatly since he was a student.

"You too have now entered an exclusive club," he said. "With that privilege you have responsibility. … Turn around and give someone else a hand up the stairs and through the door."

Futterman talked about how he wrote the first draft of "Capote" lying in bed and sitting in Butler Library, Avery Library, the East Asian Library, and the Hungarian Pastry Shop—all while recovering from open heart surgery.

"You may be sitting out there with a very good idea how your life is going to go. Don't," he said. "Take the blinders off. Look at all the paths available to you. … We get stuck on a particular path, sometimes the wrong one. In work, in love—sometimes it's hard to change course."

Futterman credited Bonnie—a young woman whom he and his wife mentored through the Double Discovery Center and helped to apply to college—with making him realize the value of change. He also said the experience showed him how to continue to keep in touch with Columbia after graduating.

Futterman was also quick to acknowledge the mixed reactions students had when he was announced as the CC Class Day speaker in March.

"If I may say out loud what is probably on the minds of many of you—what the hell am I doing here?" he asked.

Other speakers at the ceremony included CC Dean James Valentini, salutatorian Sam Walker, CC '14, and Class of 2014 Council President Conan Cassidy, CC '14, all of whom encouraged graduates to continue their relationship with Columbia in the coming years.

Walker and Cassidy reflected on the effects their classes, professors, and friends had on their thinking.

"Our best experiences at Columbia have not been experiences of collecting knowledge or tokens of knowledge," Walker said. "They're experiences that have forced us into dialogue."

Cassidy told his classmates to remember all that they have accomplished over the past four years, and not to just focus on the stresses of college life.

"We come thinking and being told we're the brightest students from around the world," he said. "But you soon learn these are just words. … You're no longer the smartest person in your class. Just being average is an everyday struggle."

"But the question can't be why we did it," Cassidy added. "We've made it, even though at times the thought of dropping out sounded so much easier."

Valentini, in typical fashion, compared graduation to a comma that separates two parts of a person's life.

He also called on graduates to use their new skills to benefit others.

"We expect to continue to nourish you, but we expect you to have the capacity to nourish others," Valentini said.

Students were joyous after the ceremony, with less than 24 hours until University Commencement on Wednesday.

"It just felt very sudden and exciting and linked with emotions I can't process yet," Krista White, CC '14, said of the Class Day ceremony.

As with the School of Engineering and Applied Science and School of General Studies Class Days, as well as Barnard's commencement, many students wore a strip of red tape on their caps to show support for reforms to Columbia's sexual assault adjudication policies.

Students wearing the tape said that they felt that the demonstration was an effective way to highlight an issue common across all schools.

"I think it's one of the more important issues that the administration hasn't really handled in the right ways," Miguel Orea, CC '14, said. "I think anything that can bring attention to it is something that should be done and hopefully can provoke positive change."