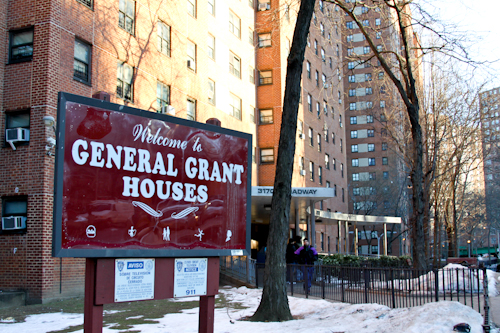 After last week's police raid on gangs in the Grant and Manhattanville housing projects, anti-violence advocates are seeking to defuse tensions and direct more funding to community organizations.

After hundreds of armed police stormed through the Grant and Manhattanville housing projects in West Harlem last week, arresting more than 40 people in the city's largest ever raid on gangs, longtime anti-violence advocate  Derrick Haynes was torn.

A resident of the Manhattanville Houses on West 126th Street, Haynes' brother was killed more than 40 years ago—the first casualty of the violent feud between the three gangs indicted in the police investigation last week. He has since worked to provide youth with enrichment programs that mitigate violence.

Although he said last week's raids were not most ideal of responses, Haynes and other anti-violence advocates are now seeking to create neutral areas to defuse tension and direct more funding to community organizations.

"What's going to happen is, we're going to stay the course," he said.

Last week, police raided the Grant and Manhattanville public housing complexes in the culmination of a three-year investigation into gang violence in the area. Over 100 individuals are indicted in the investigation, three of whom are juveniles.

The indictment includes allegations of retaliatory murder and violence between rival gangs in the housing developments—including the 2011 high-profile killing of basketball star Tayshana "Chicken" Murphy—and attempts to recruit and encourage pre-teens to partake in the violence.

Anne Morris, president of the Manhattanville Houses tenants association, acknowledged the necessity of the raid.

"It makes it safer for the residents here, because it's been a horror story," she said.

Several residents of both housing projects—many of whom refused to give their names for fear of retaliation by the gangs—echoed a sense of relief after the raids. Others, however, questioned why the police didn't act sooner and why the arrests had to be as dramatic as they were.

"The most devastation seems to come from the younger kids," Haynes said. "Seven, eight, nine, ten year old kids who don't understand police coming in and handcuffing kids, laying them down on the floor."

Morris said that recent youth violence is the result of longstanding issues like the lack of after-school programs and youth employment opportunities.

"It's been a continual problem with not enough jobs, not enough for kids to do," she said.

She said that although construction projects in public housing must give employment preference to residents, youth often need to undergo training before they can begin work—which ultimately means that contractors hire outside employees instead of local workers.

Another part of the employment problem, Haynes and Morris said, was that fewer Grant and Manhattanville houses youth had been selected to participate in this year's city Summer Youth Employment Program—in 2013, only 27 percent of applicants received a placement. Job assignments for this summer are still being announced.

Morris also said that the lack of regular police patrols is a factor in persistent gang violence.

"If something happens then you get a rash of coverage for a few days," she said. But "these situations seem to reach epidemic stages because we don't have continual coverage."

The Thursday after the raid, Columbia Vice President for Public Safety James McShane announced support for increased NYPD and Public Safety patrols along 125th Street and Broadway. In the meantime, however, residents of the housing projects said that police presence hasn't changed in recent days.

"There's no police here," Campbell said. "They came, they left."

In a statement following the raid, District 7 City Council member Mark Levine called police enforcement "critical." He added, however, that  "PSA6 and the 26th Precinct can't protect safety alone. The long-term solution to the gang violence issue lies in a dramatic increase in youth development programming in Grant and Manhattanville."

Iesha Sekou, another longtime anti-violence advocate and the CEO of Street Corner Resources, said that while plenty of community organizations are willing to work with youth, it has been difficult to secure adequate funding.

She said that obtaining funds is a "long and arduous" process, and emphasized the importance of quick intervention in anti-violence work.

"We can't play around with young people's lives," Sekou said. "We should be able to intervene at the time we see the problem."

In light of the recent increase in arrests among youth in public housing, Sekou called for a look into truancy enforcement and into teens' home lives. Parents, she said, should not have to feel hopeless.

In addition to the city government, advocates are turning to Columbia for funds. Sekou is currently seeking funding from Columbia to create a mobile violence intervention unit.

Meanwhile, Haynes plans to ask for money from Columbia's Community Benefits Agreement to open a "play street" on Old Broadway between 125th and 126th Street, which would act as a neutral zone for youth from both developments to interact.

As of now, Haynes hopes to debut the play street at a community function on June 28. He plans to invite community based organizations and residents from both developments.

"Hopefully, they'll start talking and playing and communicating with each other," Haynes said, so that they can share the Manhattanville community center by the time temperatures drop.