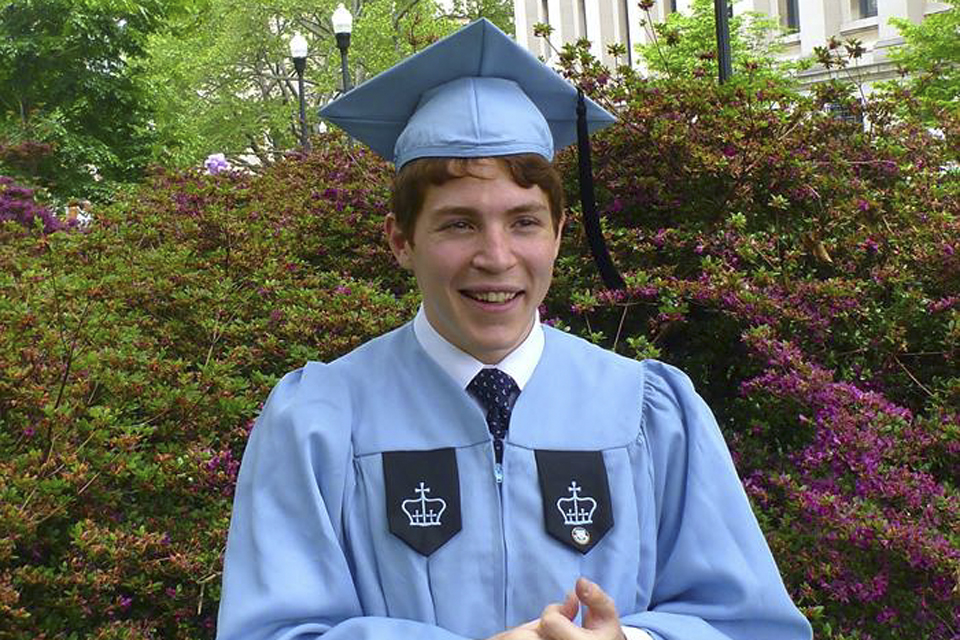 Andrew Hamilton, GS '13, who had been heavily involved in the Philolexian Society and various on-campus theater groups, died in New York City on June 24, according to the New York City Medical Examiner's office. He was 26.

Friends remembered the neuroscience and behavior major as supportive, ambitious, and having extremely diverse interests.

While at Columbia, he was involved in groups ranging from the King's Crown Shakespeare Troupe and the Philolexian Society to the Columbia Political Review and the Columbia Atheists and Agnostics.

"He had a huge personality. He had all these sorts of interests," Halley Hair, CC '11 and a close friend of Hamilton, said. "No matter what you were interested in, he wanted to know why, what you were doing with your life, where you were going, what your new project in life was."

He also served as vice president of the 3333 Broadway Tenants' Association from 2010 to 2014, and worked as a research fellow with the Harriman Institute.

"He was sort of a master of ceremonies in that way. He delighted in bringing together the friends he had that he had met through different communities," Sam Reisman, CC '10, who met Hamilton through KCST's 2010 production of Measure for Measure, said. "To anyone he considered a friend, he was a great friend."

Hamilton and his family immigrated in 1994 to Princeton, New Jersey, from Russia. After graduating from high school in 2006, Hamilton worked briefly as a banker at Bank of America before moving to Boise, Idaho, in 2007. There, he worked at Behavior Imaging Solutions and volunteered with Rep. Walt Minnick's 2008 congressional campaign.

Hamilton returned to the East Coast in the fall of 2009, when he moved to New York to attend the School of General Studies. According to friends, Hamilton quickly settled in and made a wide array of friends at and beyond the University.

"I can't tell you when I met him, because literally from the moment I met him to about a week ago when I last talked to him he was just so himself so open in a way that people aren't with strangers but he was," Jacob Rice, CC '12 and a close friend of Hamilton, said.

"He was so good at building relationships between all of the things he did and all of the people he met," Reisman said.

Reisman said that Hamilton's diverse interests can be seen in the variety of campus publications he contributed to—ranging from an article on affordable housing in New York for the Columbia Political Review to a research paper on binding memory in the Columbia Undergraduate Science Journal.

Politics—and with it, patriotism—was another one of Hamilton's many passions. Though he only gained U.S. citizenship in 2009, Reisman said that friends considered Hamilton "more proud to be an American" than any American they had met.

"I know very few people who are more proud of their American citizenship than Andrew," Fred Jennings, one of Hamilton's close friends, said. "He had a sense of respectful patriotism that is very rarely seen these days."

In 2012, Hamilton spent his summer interning at the White House. The next year, he premiered "The Russian Soul," a full-length documentary he produced with the Harriman Institute about democracy and politics in Russia.

"He was hoping to go into politics in some way, shape, or form," Hair said.

Yet all the while, Hamilton never overlooked his ever-growing group of friends. Hair said that while she and Hamilton would often get invited to dozens of events, parties, or performances by friends every weekend, Hamilton felt so bad about turning anybody down that the two would spend hours planning out exactly how to hit every event, every night.

"He wanted to support them as much as possible," Hair said. "He was a very involved friend. We spent a lot of nights, staying up all night, watching the sunrise, having crazy conversations."

Reisman said that even after he left Columbia, it was difficult not to stay in touch with Hamilton.

"Andrew was almost tenacious in the enthusiasm with which he kept in touch with his friends," he said. "He made it very much of his mission to be involved and active with his friends."

A friends' memorial service is planned for 7 p.m. on July 1 at St. Luke's Theatre at 308 W. 46th Street. A public memorial is also planned for July 19 on Columbia's campus.