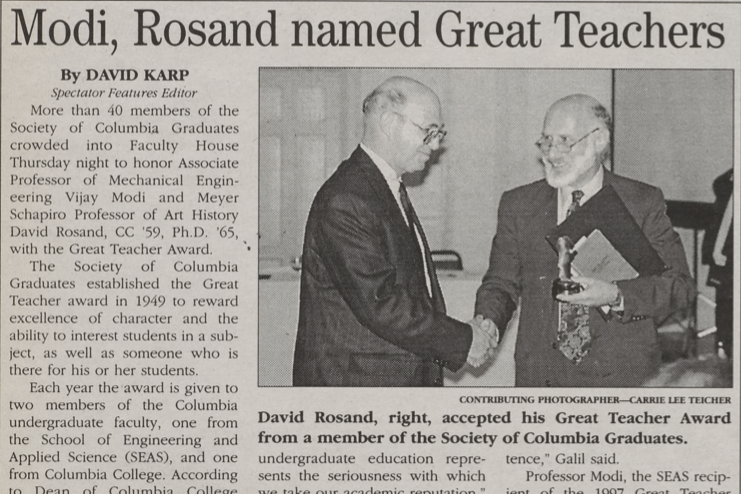 David Rosand was pictured on the front page of Oct. 27, 1997 issue of Spectator as a recipient of the Society of Columbia Graduates' Great Teacher Award.

David Rosand, CC '59, GSAS '62, and GSAS '65, a longtime Columbia professor who chaired the art history and archaeology department for seven years, died on August 8. He was 75.

Colleagues remember Rosand, who joined the University's faculty in 1964, as a pioneer for new ideas in the department as well as a supportive colleague and mentor. Rosand is survived by his wife, his two sons, and their families.

"Professor Rosand was a quintessential Columbia figure, working at the cutting edge of his academic field, dedicated to his students, and constantly active in the life of the institution," former Columbia College Dean Austin Quigley said in an email. "He set a professional standard for others to live up to and was a widely treasured colleague and friend."

Though Rosand, who also served as the director of Art Humanities from 1996 to 1997, specialized in 16th century Italian art, colleagues said that he had an equally passionate commitment to non-Western art during his time at Columbia.

"He had an unusual ability to see connections and to draw connections and relationships between topics, particularly between western art and non western art, east Asian art, that were not so immediately apparent to others," Matthew McKelway, a professor of Japanese art history and GSAS '99, said. "He was a very, very powerful presence in the department."

In 1994, Rosand published a response to an article by art critic Holland Cotter in the New York Times that lamented the underrepresentation of Indian art in the Columbia curriculum.

"Only by preparing future scholars in the field can we avoid the cultural myopia and parochialism that Mr. Cotter criticizes," Rosand wrote. "Columbia, having pioneered the study of Asian cultures within the college curriculum, is not waffling."

It's this kind of spirit that McKelway remembers most fondly of his former professor and colleague.

"I'll always be grateful for the way he was always such a passionate advocate of Asian art, art from outside Europe," McKelway said.

Art history and archaeology professor Barry Bergdoll, CC '77 and one of Rosand's former students, said that his ability to lecture on art outside his own expertise made him an invaluable resource in the department.

"He was just an absolutely fantastic colleague and also the person who whenever there was a student who had an unusual project that didn't have a natural advisor or defender," Bergdoll said. "He would take that student on because he believed in really working hard with an unusual project."

"He had more Ph.D. students than just about anybody," Stephen Murray, a professor of medieval art history and the director of Art Humanities, said. "He didn't just work with Renaissance people, he crossed borders. I often think Columbia is a tribal society, we have a habit of settling down in our little bailiwicks, and David had a way transcending that."

As director of Art Humanities, Rosand strove continuously to inspire the same enthusiasm in his students and fellow professors alike.

Rosand's professional ambitions extended beyond the classroom. His particular affinity for Venice and its art eventually led to the acquisition of Casa Murano, a small study abroad facility in the same city.

"He really infected my brother and me with a love of Venetian painting," said Jonathan Rosand, CC '88 and P&S '94 and Rosand's son. "He decided to make a map of the city and started to catalogue where various paintings and churches were, and that actually became something he could use in his own scholarly pursuits and teaching."

Rosand was also instrumental in creating the Wallach Art Gallery, of which he served as chairman for 14 years. Columbia has no permanent collection of great works of art, and according to Murray, "the Wallach Gallery helps to resolve that."

Rosand's numerous accolades include the Great Teacher Award, given to him by the Society of Columbia Graduates in 1997, and the John Jay Award for professional achievement, which he received in 2010 before retiring—though he continued to give seminars until 2013.

He was also awarded an honorary degree at the 2014 Commencement services—55 years after he received his first degree from Columbia.

"He had a unique perspective on things that I think was shaped by a very very solid sense of loyalty to the place, but was also shaped by his own determination that the department maintain the preeminent reputation it had from the time he was a student," McKelway said.