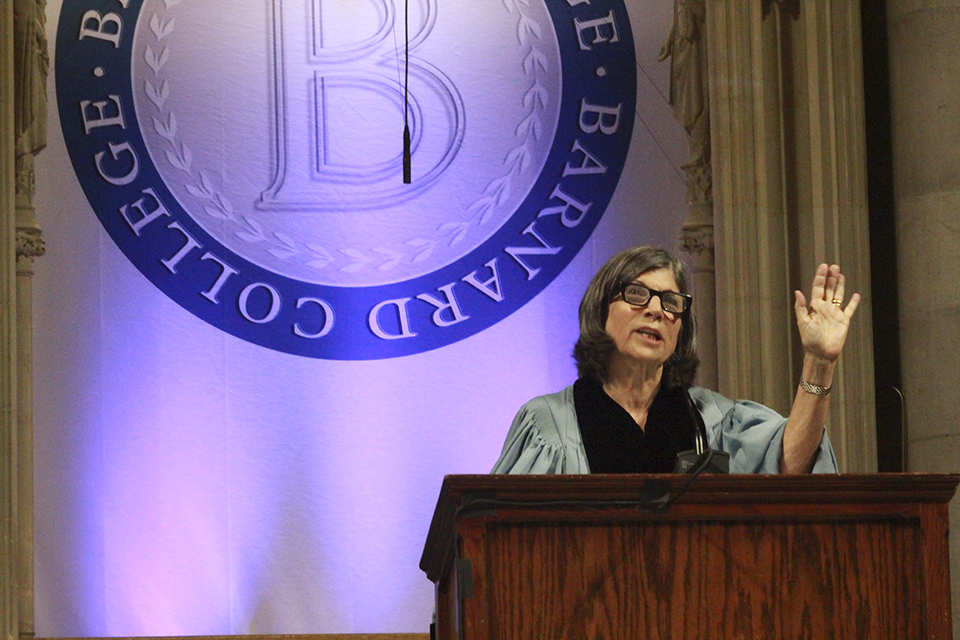 Barnard board of trustees Chair Emerita Anna Quindlen, BC 74, headlined Barnard's convocation, which kicked off the College's 125th anniversary celebrations.

Generations of Barnard alumnae, current students, and faculty gathered at Riverside Church on Monday for a school-wide convocation to kick off Barnard's 125th anniversary celebrations.

The convocation—which normally occurs during the New Student Orientation Program to welcome first-year students—included speeches from Barnard board of trustees Chair Emerita Anna Quindlen, BC '74, and administrators about why the all-women's college is still relevant 125 years after its founding.

"Barnard is the whole wide world in a package you can get your hands around—a place where it is easy to be utterly unafraid," Quindlen said on Monday, referring to her famous quote—and Barnard application mainstay—about majoring in unafraid at Barnard.

Quindlen and college administrators spoke to a crowd of Barnard students sporting their class color T-shirts, Barnard alumnae, faculty, and administrators from across the University.

While much of the event celebrated Barnard's past, some speakers hinted at its future and relevance as a women's college.

Barnard President Debora Spar highlighted the obstacles facing women in the world today—one of the many reasons she believes women's colleges are still important.

"The world needs a place like Barnard because the world sadly still operates differently for women," Spar said.

But Spar said that Barnard is still thriving, having admitted its largest first-year class ever this year.

"But here we are, not only surviving, but thriving, and better than ever," Spar said. "We are a place where, by definition, girls rule."

Barnard Student Government Association President Julia Qian, BC '15, used the event to speak about the possibility of admitting trans students to Barnard—a topic of debate that has been further fueled by Mount Holyoke's decision last week to admit trans students.

"We should challenge ourselves to take Barnard to the next level," Qian said. "I encourage you to redefine women and what it means to be a woman in the 21st century."

The alumnae who came to help celebrate their alma mater's 125th anniversary, which will be celebrated throughout the year with a number of events, reflected before the event about how the school had changed since they graduated.

"Barnard is much more focused on what the world is like for women and the definition of a woman," Elise Pustilnik, BC '53, the former head of the alumnae association in the 1980s, said.

"I keep coming back because we have a great class," Barbara Sahlman, BC '53, said. "My grandchildren and great-grandchildren also graduated from Barnard! We're all committed as alumna because the Barnard relationship is very inspiring."

Current students, meanwhile, said that the event reminded them of why they went to Barnard.

"It's nice to come to Barnard as a freshman during such a special occasion," Rosie Fatt, BC '18, said.

"It's an important anniversary," Lizzie Moye, BC '15, said. "It's interesting that women's education has gained much more popularity in recent years, and this convocation is a celebration of that."