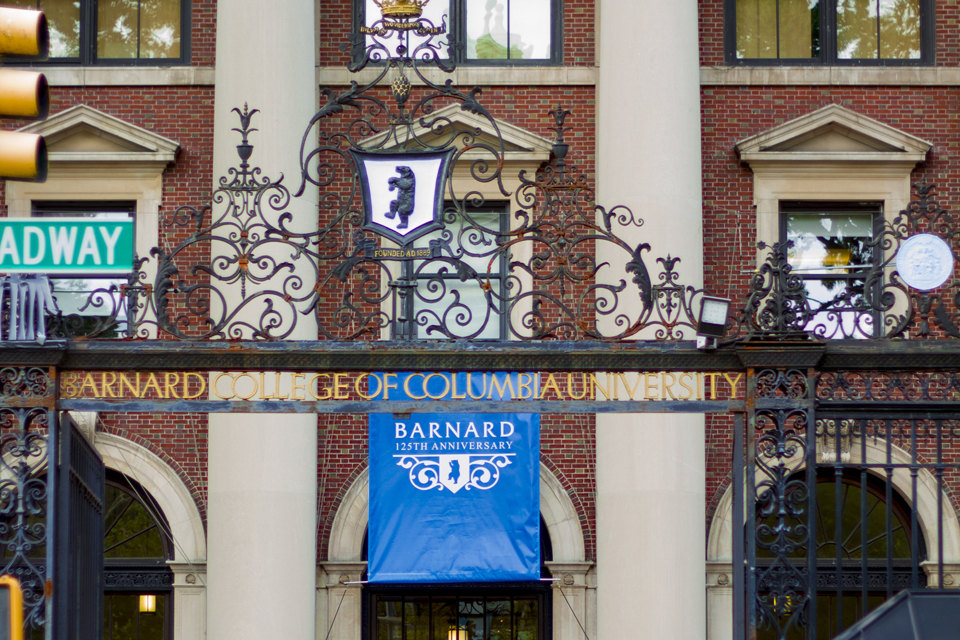 Barnard Hall remains free of student group banners as the fall semester enters its second week, and no replacement location has yet been offered to student groups.

Barnard Hall remains free of student group banners as the fall semester enters its second week, and no replacement location has yet been offered to student groups.

Until last spring, student groups have been able to reserve space and hang banners on the prominent academic building to promote events on campus. But after a Students for Justice in Palestine banner was taken down last year, Barnard administrators announced they would re-examine the school's banner-hanging policy and would not allow student groups to hang banners from the building until the creation of a new policy.

Now, almost seven months later, student groups are wondering when the new policy will be announced.

"Barnard's Office of Student Life is working with leaders from SGA, GBB, McAC, and other student groups to develop new guidelines for banners, flyers, and other communications about student activities on campus. This process will be ongoing throughout the fall, with a more formal policy announcement expected later in the semester. We will keep you posted," Barnard's director of public relations said in a statement.

"The most prominent place a student group has to advertise at Barnard has not been replaced," Tony Lee, CC '15 and the president of the Activities Board at Columbia, said. "We're not really sure how it's going to be replaced."

Barnard's Student Government Association did not respond to requests for comment about the new banner policy, though SGA said in a statement in April that Barnard should rehang SJP's banner.

"When you remove or break this tradition of using such a central space on campus for that type of advertisement, you are in some ways disappointing the student body, you are going back on the commitment that you made," Shezza Dallal, BC '16 and a member of Students for Justice in Palestine, said.

"These Barnard Hall banners have always been student-created and, as such, reflect the diversity of student interests and concerns, but are not meant to convey an endorsement," Barnard Dean Avis Hinkson said in a statement last spring. "Barnard has been and will remain committed to free speech."

While no formal discussions have started with groups on campus this fall, students would like to see the return of banners somewhere on campus.

"I think that the Diana Center in that way would be a great place for student group expression whereas Barnard Hall, which is a broad unifying campus wide thing should be neutral, and I think neutral is a difficult term to define it should be empty except for the Barnard banner," Hillel Treasurer and former President Hannah Spellman, BC '15, said.

"I don't want there to be a space for those exact banners in the Diana Center, [it is] not at the entrance of Barnard," Dallal said. "I think there is something beautiful about the entrance of a university being where you first see students' involvement, and it doesn't matter whether or not you agree with that message."

For some students, the banner was a symbol of student involvement and activism on campus.

"When you come visit this campus, before you come to Barnard, before you even decide to apply, when you speak to students that go there, and then when you attend, the use of public space is a commitment to students," Dallal said. "It communicates the fact that student activities are given priority and even a platform to be celebrated, to be encouraged, to be the central and focal point—next to academics—of a student's experience on campus."