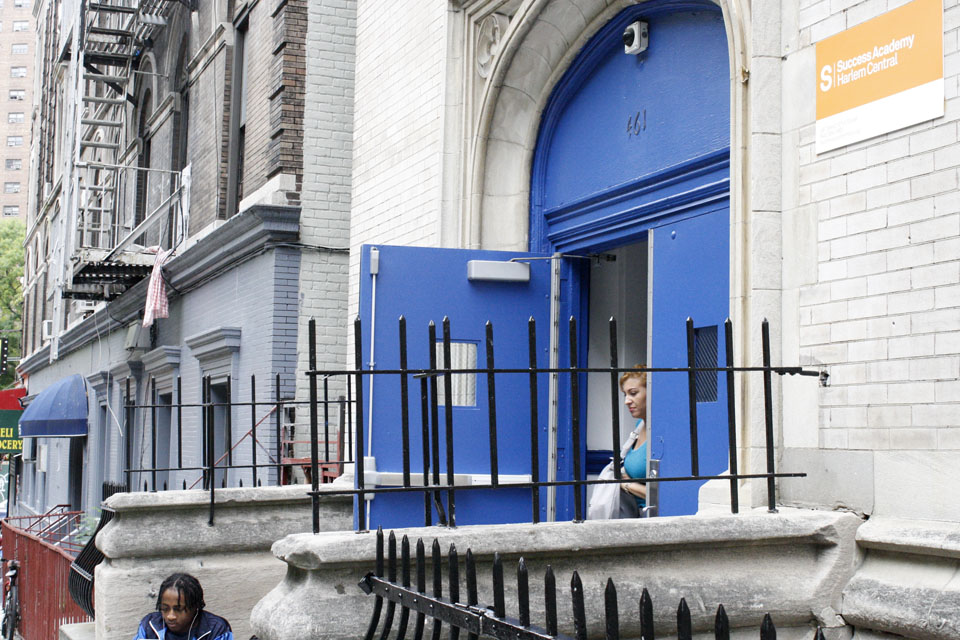 Success Academies Harlem Central moved into a larger building this fall, but community members have lingering concerns about charter schools' relationships to the city.

One of the biggest changes for sixth-grader Anayah Lyons this fall is how she "travels" from class to class—because of a bigger building this year, each of her classes now has its own classroom.

The extra space is courtesy of a last-minute decision in April to move her school, Success Academy Harlem Central, into the former Annunciation School building on Amsterdam Avenue and 131st Street after an earlier co-location was cancelled.

But while students and parents at Harlem Central have found a home, the larger debate over school space that led to their charter school's placement in a former Catholic school building is far from over.

After a state law passed in April mandated that the public school system find or rent space for charter schools, de Blasio found space in former Catholic school buildings for three schools whose co-locations had been cancelled.

"I applaud the mayor—I think it's a diplomatic solution he came up with," Rashida White, president of Community Education Council District 5, said. White's council serves as a liaison between parents and the Department of Education.

While White is glad Harlem Central will not be co-locating with a public school, she said that the law itself was misguided as it required the city to pay the charter school's rent to the Church of the Annunciation while reducing de Blasio's control over the school system.

The rent money, White said, could be better spent on public schools.

"There are already communities where our public schools have fewer resources," she said, adding that she thinks Success Academies has the ability to rent and renovate a space without city money.

White said she's also frustrated that the DOE didn't directly contact the CEC when the deal went through.

And while she has not heard any parent complaints, White said that the person who would have fielded those complaints—Denise Gordon, the former district family advocate—was fired over the summer.

"The timing was really bad, going into the school year," she said. "The parents loved her."

Jose Clavero, a vicar at the Church of Annunciation, said that while communication with the school has been good overall, it was his expectation that Harlem Central would admit students from the surrounding community.

"We were a little surprised that the school is not open to all the public. They take students from another associated school," Clavero said, referring to Success Academy Harlem 4, an elementary school that feeds into the middle school.

"I thought this could have an impact on our population, that people could get into this school," he said, adding that the church and the community it serves are "extremely weak" financially. "We are not looking at the money, no way. We really wanted to have a school, a school that could service the community."

The Annunciation School closed in 2013 due to financial pressure, as part of a sweep of 24 Catholic-school closings by the New York Archdiocese.

Like White, she said she's frustrated by the apparent lack of communication with Success Academies, the largest chain of charter schools in the city.

"I'm not explicitly anti-charter, but it's the process by which this particular charter came in—by completely bypassing the community," Aristy-Farer said. "Granted, there are people in the community who they do serve, but we have to engage better."

She added that the law passed last spring did not fully define the DOE's procedure for renting out private space for charter schools.

"There seems to be a gray area in the law," Aristy-Farer said. "It regulates the process of co-location but it doesn't mention what you do with private space when it's transitioning to become public space."

She said the result was a lack of community outreach, leading to anger among community members that Harlem Success Academy City Hall was offered space before public schools that have been waiting longer.

"The way that the Success Academy is forcing the DOE to pay rent at Mother Cabrini High School—somehow they completely bypassed community engagement," Aristy-Farer said.

"The things that go on in a public school—they had a big fight today," she said. "Here it's different; they have a zero tolerance policy for fighting."

"When we first heard they were closing the school, it was very emotional because we invested time in this school," said Peggy Thomas, the mother of a seventh-grader, remembering taking part in protests against the cancelled co-location last year.

"It felt good to have our voices heard, because we want the best for our children and they deserve the best," she said.