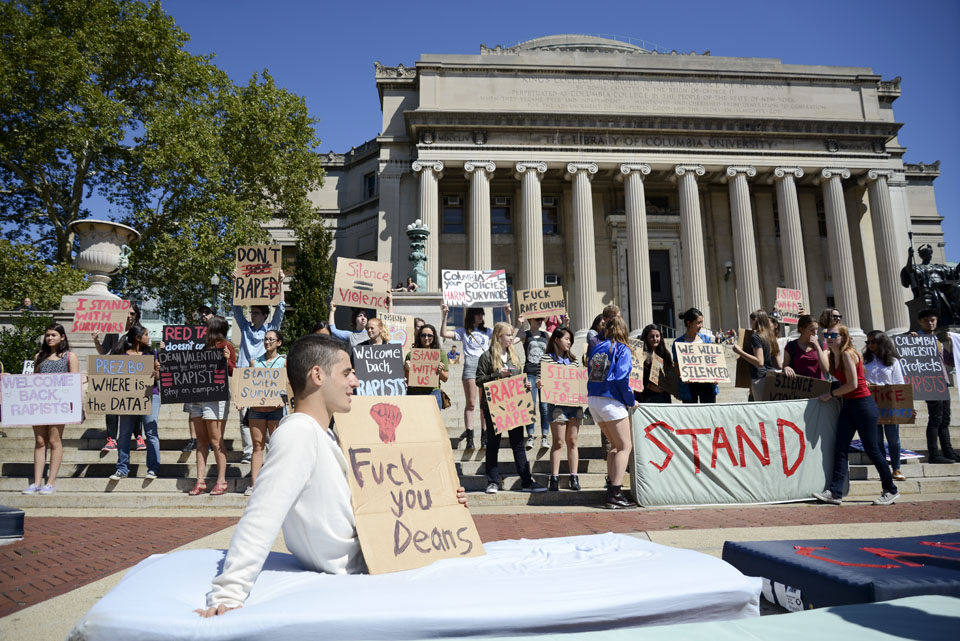 Nearly 100 students held signs, painted in red and black on sheets of cardboard, during a rally Friday afternoon on Low Steps to protest how the University handles sexual assault.

"Welcome back, rapists!" read one sign. "How dare you?" asked another. "CU has a rape problem," declared a third.

Nearly 100 students held signs, painted in red and black on sheets of cardboard, during a rally Friday afternoon on Low Steps to protest Columbia's handling of sexual assault on campus.

After months of student activism, a still-pending federal complaint, and national media attention sparked this September by Emma Sulkowicz's, CC '15, performance art piece, survivors and protesters shared stories, statements, and poetry as a way of expressing their frustration at the University administration's lack of response to the issue.

Others were more blunt in their calls for action. "Dean Valentini, why are you letting my rapist walk around this campus?" asked sexual assault survivor Sarah Yee, CC '16, as a chant of "Fuck you, deans" rose up from the crowd.

"No one has our consent to fuck us over," said Giuliana 'G' PeBenito, BC '16, who described herself as a three-time survivor of rape. PeBenito went on to share two spoken-word pieces, one of which described Columbia as a place "where future leaders commit rape and come back," and its administration as a "machine of superiority and control."

The crowd of hundreds who gathered to attend the protest included students from across the University's schools, many of whom said they had been following the issue and looking for a way to get involved.

"So much of this activism has been from undergraduates, and we've been looking for a way to participate," Victoria Wiet, GSAS '18, said. "Because this is largely an issue of culture, and that affects everyone."

"We're totally in solidarity," Rosa Schneider, also GSAS '18, said. "This is a nationwide issue—the fact that so many of our colleges are currently being sued under Title IX is completely ridiculous."

"I'm disgusted at how many resources this college does not offer," Gabrielle Robbins, BC '16,  said.

Robbins' theme was a common one, with many protesters listing the ways in which they felt the University had failed in its responsibility to provide adequate resources for survivors of sexual violence.

Though the University's Rape Crisis/Anti-Violence Support Center now has an additional location in Lerner Hall, students say that the center still lacks round-the-clock staffing. Students also pointed to the University's delay in releasing aggregate, anonymous data on sexual assault adjudication as an area of disappointment.

"What about actually reforming the adjudication process so that those most invested in this school's reputation are not the ones making the decisions?" asked one speaker during the rally, in reference to the fact that sanctions and appeals in sexual assault cases are decided by the dean of the respondent's school—a procedure activists have repeatedly said they want to change.

"They [the deans] don't look out for us. The record condemns them more than any email could," the protester said.

Several professors attended the rally, but University officials were not present on Friday. When asked for comment, a Columbia spokesperson said the University supports students' right to express their views.

"We believe every student and every member of the Columbia community should be safe and feel respected, and the University is committed to sustaining the effort needed to achieve this goal," the University said in a statement sent to Spectator. "Student activism and campus dialogue are a welcome part of building upon the many changes underway at Columbia aimed at preventing gender-based misconduct and better responding to its occurrence.  We expect and welcome students exercising their free speech rights in peaceful ways that continue the campus conversation that began in earnest in the spring semester and continues today."

Earlier this week, a group of students, including a number of the organizers of the Stand With Survivors speak-out, met with Bollinger to request further changes to Columbia's sexual assault policies. The students asked that Bollinger respond to the proposals—which focused on prevention, adjudication, and response—within three weeks.

Some activists said they took the University's lack of response as an effort to shut them out. "Maybe the reason they're trying to get us to shut up is because this conversation hurts," Marybeth Seitz-Brown, CC '14, said on behalf of Columbia Alumni Allied Against Sexual Assault.

"It's especially hard to keep having it year round and day after day, and not just have this turn into another Columbia scandal," she added.

Although many stepped up to share their thoughts, one of the more poignant moments came toward the end of the event when a student stepped out from behind the barricade of mattresses set up by the protesters to accept the megaphone being passed around.

"My name is Emily, and I'm a freshman," she said. "I've been on this campus for two weeks and I was sexually assaulted six days ago. And nobody has told me where to go from there."

Correction: An earlier version of this article misidentified a student speaker as Gabrielle Pepinot. She is actually Gabrielle Robbins. Spectator regrets the error.