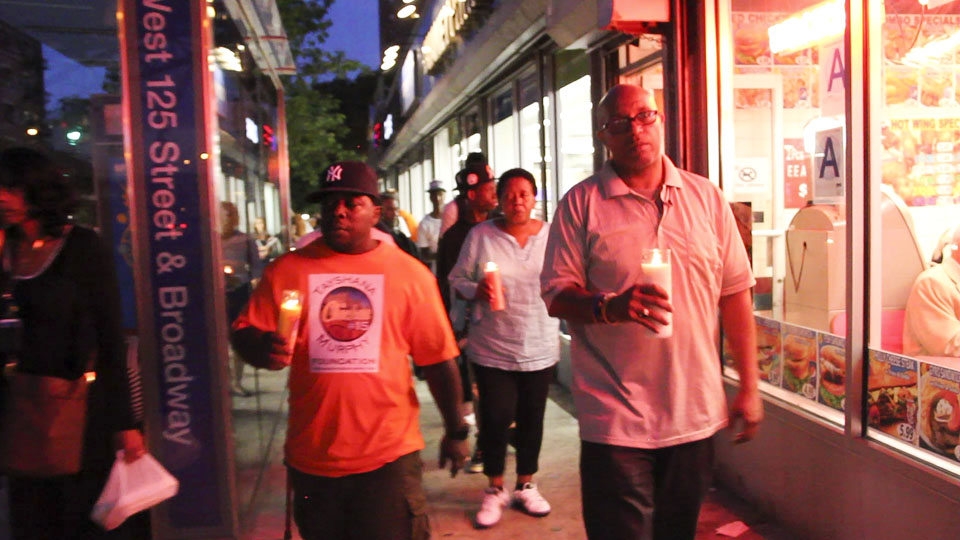 A candlelight vigil commemorated the murder of Tayshana Chicken Murphy, who was shot three years ago on Thursday in the hallway of her building at the Grant Houses, becoming another casualty in a 40-year dispute between the Grant and Manhattanville houses.

Some brought candles in their pockets, while others pushed babies in strollers, but everyone who gathered on the block of Old Broadway between 125th and 126th streets on Thursday night came for one reason: to support Taylonn Murphy, as he once again retraced his daughter's last steps.

The candlelight vigil commemorated the murder of Tayshana "Chicken" Murphy, who was shot three years ago on Thursday in the hallway of her building at the Grant Houses, becoming another casualty of the 40-year dispute between the Grant and Manhattanville houses, two public housing projects on either side of Old Broadway.

Ever since his daughter's death, Taylonn Murphy has worked tirelessly, alongside fellow anti-violence advocate Derrick Haynes, to bring an end to the violence by providing programs and training for youth at the housing developments.

While it is currently ringed by empty storefronts, the block of Old Broadway that served as the starting point for the vigil is where Murphy wants to open after-school programs, a basketball court, and job training services—initiatives that could give kids alternatives to fighting and provide a neutral zone where they could socialize.

"It looks like nothing, but this is the corridor where everything is happening," Murphy said, motioning around himself at the block.

His mission gained urgency this summer, when on June 4, the New York Police Department conducted the largest police gang raid in city history at the Grant and Manhattanville houses, arresting over 40 young men in the culmination of a four-year investigation.

Arnita Brockington, whose son Tyshawn Brockington was arrested for Tayshana Murphy's murder in 2011, has partnered with Murphy to hold meetings with the parents of the men arrested in the raid.

Brockington expressed frustration that the city turned to mass arrests, rather than early intervention, to quell the violence.

"If the children was out of control in 2010, they should have been dealt with in 2010," Brockington said, referring to the year the police started their investigation into alleged gang activity at the houses. "It seemed like they waited until they was old enough to be charged as adults."

She worried that violence was becoming normal for children growing up at the houses, who, she added, have gone without grief counseling even after many of their family members were arrested this summer.

"When you ask the children, 'Why are you fighting them?' they don't know," she said. "It's just regular for them, and it's not regular."

Brockington's laptop was seized as evidence during the raid, and she said that many residents' doors were broken down by the police.

Rafael Quinones, who lives in an apartment on Old Broadway, said the police entered his home and handcuffed him, his daughter, and his granddaughter before confiscating 19 pairs of sneakers and two photo albums.

"They came in with a copy of a warrant, but it wasn't signed," Quinones said. Two of his sons were arrested during the raid and are currently incarcerated at Rikers Island.

At the vigil, Brockington said that she felt nervous about coming to the houses.

"I've never been to Grant. I feel there's kind of people there who don't support us working together," she said.

Murphy also said that lack of unity between adults at Grant and Manhattanville has complicated his anti-violence work.

He described a planning session for a meeting of parents at the two houses that will take place this Saturday, where organizers suggested people from each house wear different-colored name tags.

"That just tripped me out," Murphy said.

Few parents from either house were among those at the vigil—only around 20 people attended, most of them family members of Tayshana or anti-violence advocates who have worked with Murphy and Haynes in the past.

Monica Cassaberry, whose son was shot in Brooklyn in 2011, works with groups such as Harlem Mothers S.A.V.E., Moms Against Guns, and Queens Mothers Rebuilding in addition to her recent work with Murphy and Haynes.

"It's sad, but I'd rather be out here helping people know that this is serious—that it's an epidemic—before they become me," Cassaberry said.

After the sun went down, attendees lit their candles and walked two-by-two across 125th Street, making a left on Broadway and ending in front of the Grant Houses.

Murphy continued into the building with two other family members, lighting his candle in the fourth-floor hallway where his daughter was murdered.

Back outside, Murphy addressed the crowd one more time, keeping the message positive even as some in the crowd began to cry. Behind him, candles illuminated the front window of the building.

"It's really important to me, retracing steps, because in retracing them, it shows we can change them," he said. "I still at times hear her blood screaming from the fourth floor, and it's kind of screaming because the community needs to come together."