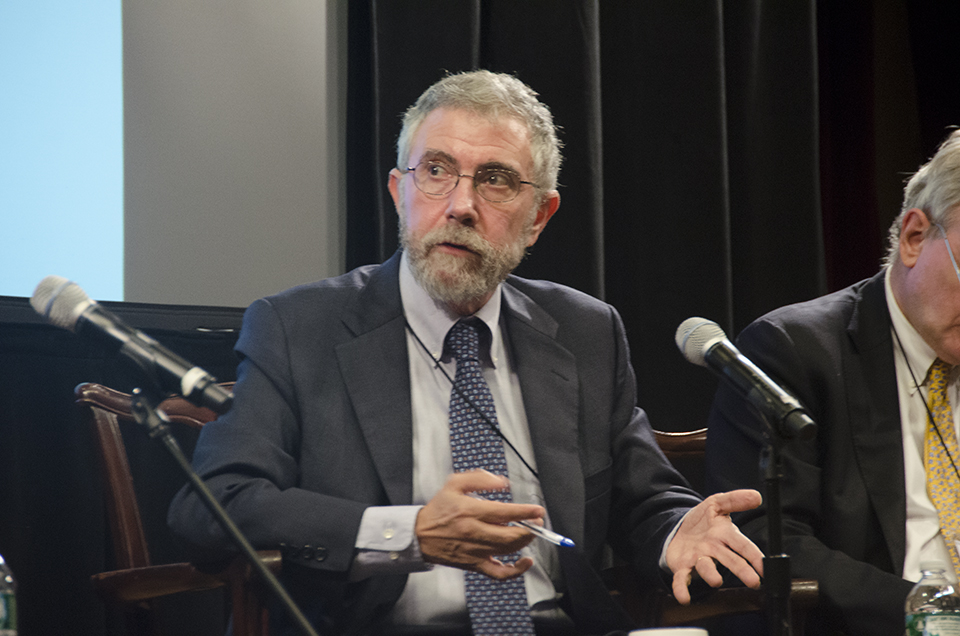 Nobel Prize winner and Princeton professor Paul Krugman was one of the headliners at this weekend's Rethinking Economics New York, a student-led economics conference organized by students from Columbia, NYU, and The New School.

The word "economics" usually brings to mind images of complicated models, mathematical formulas, and business attire, but this past weekend's Rethinking Economics New York conference was there to shake that image up.

The Rethinking Economics movement is a student-led effort to "demystify, diversify, and invigorate" economics, according to its website. This student-led conference, which took place over three days at Columbia, NYU, and The New School, is the first of its kind in the United States, though the movement has been gaining momentum in Europe, with over 90 university groups falling under the Rethinking Economics umbrella.

The idea for the New York conference came from RENY co-founder Thomas Vass while he was studying at the London School of Economics. After attending a Rethinking Economics conference in England, Vass decided to bring the movement to the United States. This weekend's student-run conference, which Vass and his teammates have been planning since last September, was the result.

"The conference has evolved over time," said Rohan Grey, a J.D. candidate at Columbia Law School and coordinator of the Columbia chapter of the Modern Money Network, an independent, national organization that focuses on the legal operations, design, function, and regulation of money that's housed at Columbia Law School.

Grey was approached by RENY last May to make Columbia a venue for the conference. Since then, he has been involved in preparing event spaces, contacting speakers and organizations, and putting together ideas for panels.

"We're really excited to bring new conversations to campus. Particularly in a student-driven way," Grey said. "We're trying to get people to start a conversation about economics. From our side we're interested in targeting policymakers, lawyers, journalists—people who shape the discourse around economic ideas."

According to RENY co-founder Raphaele Chappe, a doctoral student at the New School, the goal of the conference is to introduce pluralism and diversity to the economics field, which has been criticized as being over-specified and separated from other important influences. The founders said the conference aims to introduce new ideas and experiences to the discipline to encourage economists to explore different methods and philosophies.

"We feel that economics has become very insulated from other social sciences," Chappe said. "There isn't a lot of cross-disciplinary dialogue. This is the kind of dialogue we're trying to establish."

RENY's founders said that the diversity of the conference is important to facilitating this conversation. Attendees included undergraduate and graduate students of economics, as well as writers, civilians, professors, and professionals from a variety of industries.

"We're challenging the dominance of one specific paradigm," Vass said. "Economics is too important to be left to economists."