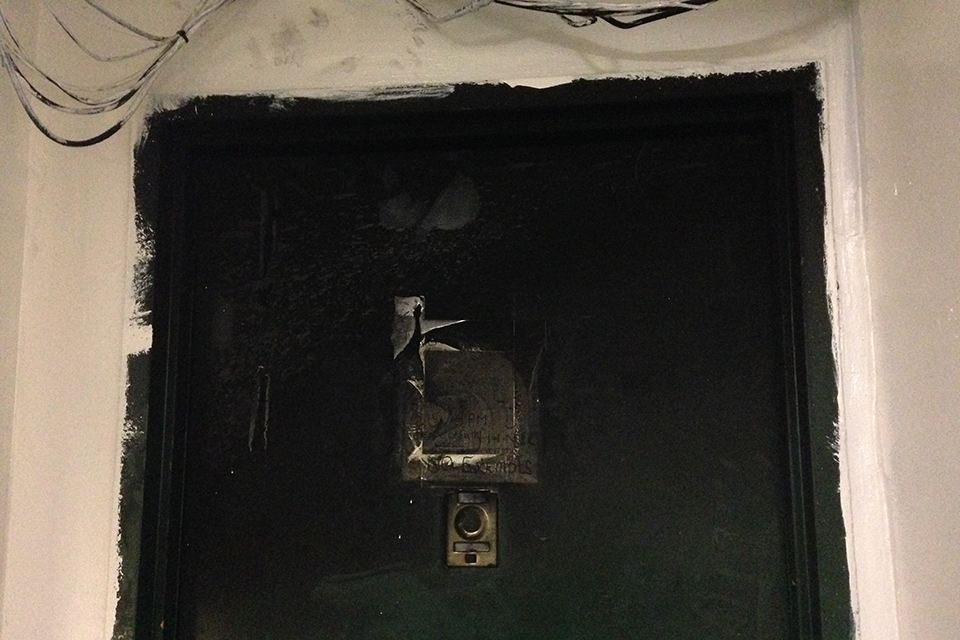 Residents are frustrated that the owners of the Ennis Francis building have yet to repair fire alarms and sprinklers three weeks after a fire.

Three weeks after a fire scorched the second floor of an affordable housing development in Harlem, residents are frustrated that owner Abyssinian Development Corporation has yet to make basic repairs.

As of Saturday, charred fire alarms are still in the pulled position and windows remain boarded up in the Ennis Francis I lowrise building on West 124th Street and Adam Clayton Powell Jr. Boulevard, where the fire took place on Aug. 22.

Soot still covers the outside of the building, and a burnt smell is ubiquitous. Fire alarms in the hallway were covered by wet paint signs, while the burnt and moldy walls reported in a New York Daily News article appeared to have been recently painted over.

"The manager came and saw what happened, but I can't say they did anything because I didn't see anything. After the fire, they just painted over the soot," Kim White, who lives on the third floor of the building, said.

White, who has lived in the development for over 31 years, said ADC's inaction has left her feeling "disgusted."

Latisha Oliver, 48, who lives down the hall from White with her four children, said she was left "traumatized" by the fire because the alarms did not work.

"I pulled the alarm, I pulled it and it came off the wall. It's terrible," Oliver said. "Have they fixed it since? No."

"Those things have been off for a long time," another third-floor resident Clara Clarke, 78, said about the alarms. "We never have any fire, we only have one alarm if you go onto the roof."

Clarke said she was awoken on the morning of the fire by the sound of firetrucks outside, but would not have known that the blaze was right under her had she not opened her door—and saw the smoke in the hallway.

"This is a death trap," White said. "We live in hell. This building was built to kill us."

Neither ADC nor the management of Ennis Francis I responded to multiple requests for comment on Monday. White said that the second-floor units where the fire started remain empty.

The lack of a response after the fire only added to residents' frustration with ADC. In 2010, tenants in the dilapidated Ennis Francis I building were promised new units at a building currently under construction on 123rd Street, but continued delays have residents wondering when and if they will actually be able to move in.

ADC officials have since said that the building will be completed by February 2015, but residents and neighbors remain unconvinced.

"Abyssinian is supposed to be managing, but it's all about politics," White said. She said Reverend Dr. Calvin Butts, III, president of ADC, cares more about his image than his real estate.

"He just does everything to glorifying himself. If he was really a man of God, he would visit," she said.

Joshua Bauchner, a former Community Board 10 member and a member of Friends of West 123rd Street, said that ADC's inconsistent funding makes it nearly impossible for management at the Ennis Francis buildings to maintain order.

"ADC is a management and development company but they can't manage and can't develop, so they are incompetent," Bauchner said. "Good people are suffering."

Last year, ADC responded to tenants' complaints about stalled construction by promising to hold monthly meetings with all stakeholders.

Melvin Christian, chair of the CB10 housing committee said these meetings have been held consistently.

Even with improved outreach, however, residents are still left wondering when conditions will improve.

"At first, Abyssinian came in and it was all romantic for a while, but the romantic relationship has gone on for too long and has now burned them, literally," said Matthew Stillman, a resident of West 123rd Street and a member of the 123rd Block Association.