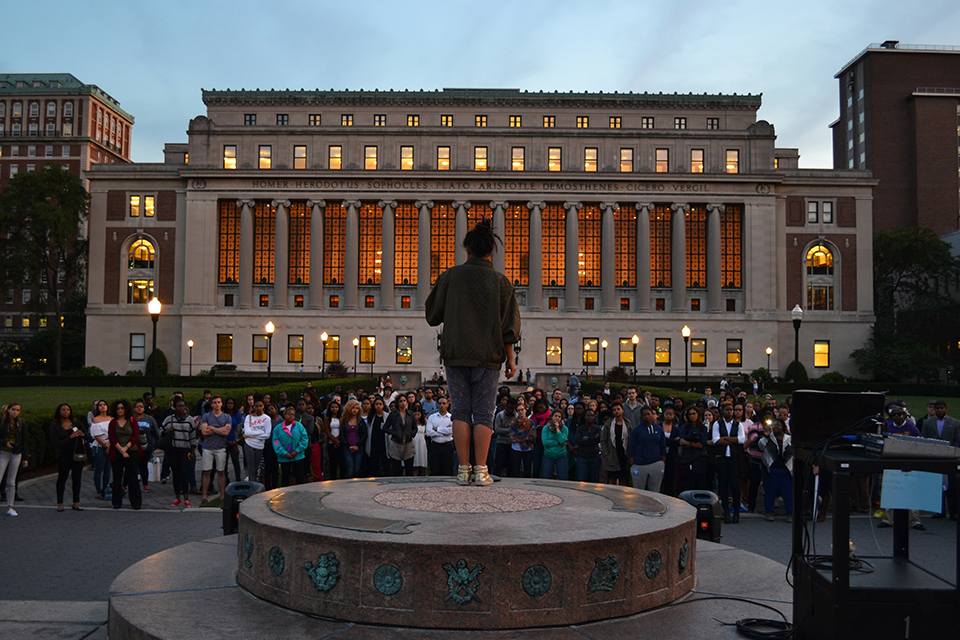 More than 50 students and locals gathered on Monday night in a Ferguson solidarity rally in front of Butler Library.

Columbia students rallied in solidarity with the residents of Ferguson, Missouri, in two separate events this week, after the death of Michael Brown at the hands of a police officer last month sparked nationwide conversations about race and justice.

More than 50 students and community members held a rally and speakout in front of Butler Library on Monday evening entitled "He Was No Angel: The Re-Valuing of Black Life."

Then on Wednesday evening, students held a town hall titled "Now What: The Role of Millennials in the Aftermath of Ferguson" to foster discussion on police brutality and racism in modern American society.

"I want to make some of you aware that the extrajudicial killing of black people is nothing new," Aurra Fellows, Law '16, said to the crowd in front of Butler Library on Monday.

More than 50 Columbia students and community members held a rally entitled "He Was No Angel: The Re-Valuing of Black Life" in solidarity with residents of Ferguson, Mo., after the death of Michael Brown at the hands of a police officer last month sparked nationwide conversations about race and justice.

Participants chanted slogans like "no justice, no peace" and "We have nothing to lose but our chains" in between speakers who shared poetry and stories about racial discrimination and violence.

Fellows, a co-organizer of the rally and president of Columbia's Black Law Students Association, said that the goals of the rally were to reflect on the history of police violence against black people and to incite change.

"Nothing gets done if it is not talked about," Fellows said. "Silence is acceptance. Never has silence changed anything. When you accept what's happening, when you don't take a stand, you're basically saying you're okay with it continuing."

Students said that Monday's rally offered them a chance to speak out on systemic racism that ultimately led to Brown's death.

"We've had our moments of silence," Asha Rosa, CC '16 and a member of Students Against Mass Incarceration, said. "But now we need to be so loud that Columbia, that the NYPD, that DeBlasio, that Obama, that President Bollinger can't not listen."

"How are we silencing the voices of those who belong [at Columbia]?" Sharielle Applewhite, a speaker and social work student, asked. "How are racial microaggressions happening within these institutions of higher learning to silence the voices of people of color?"

"We started a conversation in the law school about the way that law is used to penalize black and brown bodies for no reason," said Luis Hoyos, Law '16 and a member of the Latin American Law Students Organization, which co-organized the rally. "As law students we saw a duty to be very cognizant of what is going on … to be aware of how our law enforcement is skewed against certain groups."

Attendees also said that the rally provided a local venue to have discussions about the events in Missouri, as well as racism in the country.

Racism "is always going to be ingrained in culture, and when big events like this happen it's just important to recognize that," Jaipreet Setchi, BC '18, said.

"As a black person witnessing what happened in Ferguson, seeing it on Tumblr, seeing it on Twitter, as opposed to what the media was covering … I was very angry," attendee Elena Peditt, BC '18, said. "I came here because it is a safe place to get out your feelings and talk to people about what happened, and to remember."

Other groups involved on Monday included the Revolution Club of Harlem and the Harvard Black Alumni Society of New York. The Bronx-based poetry group Peace Poets also opened and closed the rally with performances of spoken word pieces from their members.

At Wednesday's town hall, a smaller group of students gathered in the Columbia Law School with representatives from other law schools to discuss the implications of the events in Ferguson on 21st-century society.

"Ferguson has revealed that we have work to do," panel member Erica Ayala, a youth leadership development associate at the Children's Defense Fund, said. "The community as a whole is still torn as to what it means to move the ship of civilization forward … how we can do that collectively and with love. I hope we challenge ourselves … to have hard conversations, including conversations about race."

Another topic of discussion was how work- and debt-laden youth could effectively address issues like racism and police brutality.

"There is a whole culture of posting articles just to post them, these thinkpieces where the headline is going to serve as an extension of what your personality is on Facebook or Twitter and you don't even read the entire article," Brandon Delesline, an account supervisor at the multicultural advertising agency UniWorld Group, said. "There are a bunch of answers here, but for me the first one is to become educated, to become knowledgeable."

Ekow N. Yankah, Law '00 and a professor of law at Cardozo School of Law, said he wanted to move beyond conversation to action.

"If I hear one more commentator on public TV say, 'Let's start a conversation about race,' I will lose my mind," he said. "We've been having a conversation for 80 years."