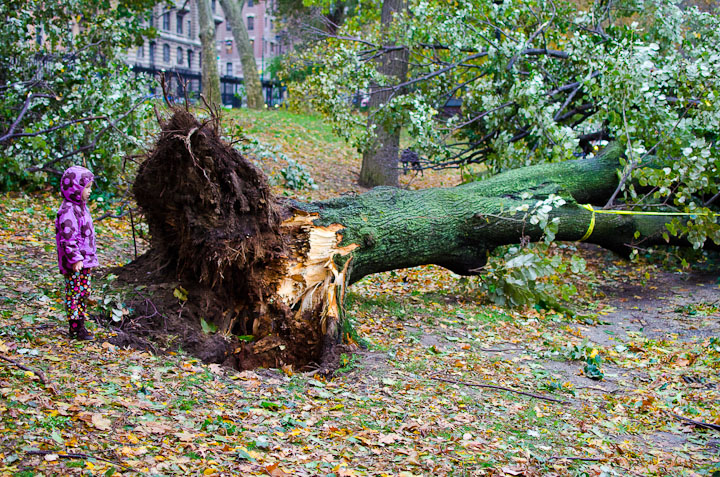 Upper Manhattan organizers are working to make global environmental issues feel relevant to locals ahead of Sunday's People's Climate March. Pictured above is Hurricane Sandy, an event that locals said made them take climate change seriously.

Local recruitment for this Sunday's march—which organizers are billing as the largest climate march in history—has focused on aligning climate with other environmental justice issues and working with the community's many recent immigrants, some of whom are in the city because of climate impacts in their home countries, according to march organizers.

"One of the things that we are trying to focus on is the current impact that people are feeling on themselves, in their neighborhoods," Deirdre Aherne, an organizer for the New York City branch of environmental group 350.org, said.

Recounting her conversations with locals, Aherne, who has lived on the Upper West Side and Harlem for 24 years, said she tried to emphasize the connections between immediate environmental health issues and global climate change.

"When you talk about environmental pollution, it's much more relevant to talk about the pollutants in the atmosphere—methane, mercury, black dust," Aherne said.  "Focusing more on those issues brings it more home to people, and it's obviously related to global warming because the same actions are putting them into the air."

Louis Bailey, an organizer for WE ACT for Environmental Justice, an environmental advocacy group in West Harlem, said many residents cite Hurricane Sandy as the event that forced them to take climate change seriously.

"Sandy opened the eyes of folks, especially here," he said, remembering the damage to the city's transit system. "This wasn't a fluke, but I don't think anyone expected it to hit with the severity it hit."

According to Aherne, recruitment strategies have attempted to draw on the strength of existing community networks, such as the community gardens throughout the area.

A teach-out WE ACT hosted on Saturday was planned by 11 different organizations working in the area, including South Bronx United and Brotherhood/Sister Sol.

The event "gave the community a basic one-on-one on climate justice," according to Bailey, who said the teach-out drew over 100 residents, and that the crowd was "engaged" and representative of both youth and adults.

Aherne said that in addition to work within established community groups, outreach into immigrant communities has been important in the uptown region.

"Many immigrants who have come to this country have a much more direct and visceral experience of environmental impact in their countries," she said, giving examples like refugees who fled Indonesia after the wreckage of Typhoon Haiyan.

"You've got a lot of people in this country who are already climate migrants," Aherne said.

For Mona Molarsky, who grew up in Morningside Heights and now lives on West 110th Street, climate change has felt like a real threat since 1994, when, while working as magazine editor, an article about rising sea levels in the Maldive Islands crossed her desk.

So when Molarsky heard about the People's Climate March she quickly got involved, signing up online to hand out leaflets in front of the 110th Street No. 1 train station last Sunday.

To Molarsky, climate change is the latest political issue in the Morningside Heights neighborhood's long history of activism—she remembered getting involved in the anti-Vietnam War and women's movements in the 1960s, and helping to organize for tenants' rights in the following decades.

"Unfortunately, I don't know as many people in the neighborhood now who are as politically involved as they used to be," Molarsky said. "There were many intellectuals and artists in this area. Now that's kind of changed because of the real estate industry—everything's condos."

Meanwhile, according to Aherne, encouraging people to speak out against governments and corporations is the only way to effectively combat climate change—individual actions, like choosing wind power over coal or oil on an electric bill, are "a drop in the ocean," she said.

"The tides cannot be turned by individuals alone," Aherne said. "Until people really speak up to their governments and say, 'Look, something really has to be done,' there's no pressure on the government to stand up to the corporations that are actively going against what we need to do."