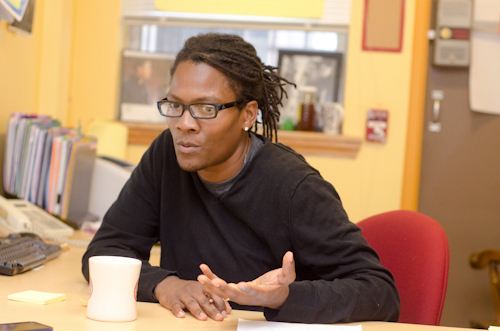 Lea Robinson, assistant director of the Office of Multicultural Affairs and manager of LGBTQAA programming, is leaving for the University of California, Berkeley.

Lea Robinson, assistant director of the Office of Multicultural Affairs and manager of LGBTQAA programming, had her last day at Columbia on Sept. 17. But students who have worked with her remembered her as a supportive and outgoing figure on campus and say her presence won't be forgotten

A presence at the OMA since 2008, Robinson will now head to the University of California, Berkeley, to serve as the coordinator for student cooperative involvement and student leadership within the university's department of student life.

At Columbia, she has worked on projects and events like Queer Awareness Month, Athlete Ally Week, and a Coming Out Discussion Group. Her work at Columbia hits close to home—Robinson said that she first became involved in LGBTQ issues when she came out while coaching basketball after graduating college.

"I went to college and continued to be closeted throughout my career until I was a coach," she said in an email. "While coaching, I became exposed to how homophobia impacted athletics and decided to work towards creating a positive and inclusive environment for my queer student-athletes."

Robinson came to Columbia because she said the mission of OMA aligned with her personal goals in activism.

"The position looked very exciting and perfectly aligned with my goals and passions for supporting underrepresented communities on campus—specifically diverse LGBTQA communities," she said. "I also really liked the OMA team."

"Also, Columbia's history of activism was very appealing to me," she added.

She used her experience to create Athlete Ally Week, and worked to create programming that supported students who are in the midst of coming out.

Students said Robinson was a supportive and welcoming administrator.

"She was just always really supportive, and her door was always, always open," Caleb LoSchiavo, BC '15, said. LoSchiavo came to know Robinson through their work as a member of GendeRevolution and organizer of Lavender Graduation. "You could always just go in and talk to her if she was around, and just talk about anything."

"She's always been really excited about supporting us in any way she can with any work we're trying to do," LoSchiavo said. "Also, when we come to her with issues we've been having or anything, she always just really wants to help."

"She's also the point person for a lot of people in the community," Columbia Queer Alliance President Caitlin Lowell, CC '15, said. "I know that when people are having struggles her office is always open, and one of the things that Lea's known for being best at is if you have to go have feelings and talk things through with Lea, that's always an option."

Last year's Queer Awareness Month theme, "Bringing Down the Master's House," was focused on the intersection of identity issues beyond the LGBTQ community.

"One of the strengths about the OMA is all of the wonderful energy of the students that are involved," Lowell said. "And the fact that administrators have so much on their plates, but are willing to make the time for helping students with their needs and meeting them where they're at."

Robinson hopes the initiatives she worked on will continue after she leaves for UC Berkeley.

"I really hope the Coming Out Discussion Group continues to thrive," she said. "In addition, Athlete Ally Week has a second run, and the Trans* Discussion Group provides a space for our trans community to connect and be heard."