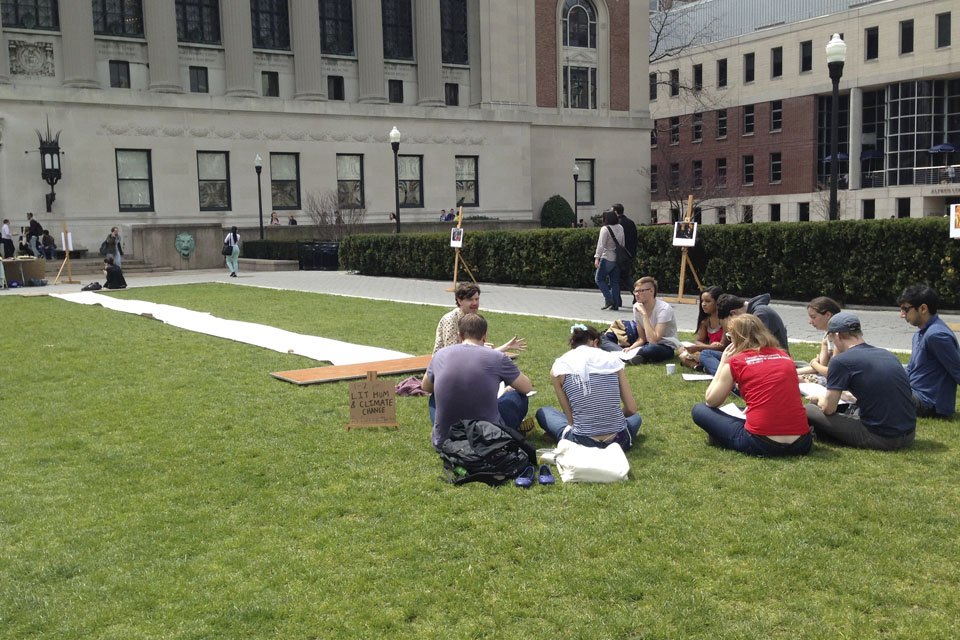 Over 800 Columbia students will march from West 86th Street to Midtown this Sunday as part of a massive effort to demand meaningful action on climate change from world leaders.

The People's Climate March, billed by organizers as the largest climate march in history, will take place two days in advance of a major United Nations climate summit that attracts leaders from around the world.

"What's unique about it [the march] to me is that it's bringing together people [who] traditionally haven't worked together before," Elana Sulakshana, CC '17, a leader of the fossil fuel divestment movement on campus and a student organizer for the march, said.

In addition to the traditional environmentalists Sulakshana calls the "Big Greens," the march has been endorsed by everyone from labor unions to faith-based organizations, scientific foundations, and local and international businesses.

Part of the mission of the march, according to organizers, is to give a voice to the people most directly affected by climate change and the fossil fuel industry. Those voices are often referred to as "frontline communities" within the environmental movement and include inhabitants of low-lying Pacific countries as well as residents who are affected by low-rising tides or residents of areas near coal plants who suffer from disproportionately high rates of asthma and other respiratory disorders.

Participants will march on Sunday in groups, with members of frontline communities at the front of the pack, followed by students, scientists, and activists.

Organizers said they are impressed with the response from the Columbia community.

"It will be possibly one of the largest mobilizations of Columbia students for a political purpose in a long time," Michael Greenberg, CC '16 and a co-organizer of the Columbia delegation to the march, said.

Greenberg said that Columbia students' engagement with the issue of climate change can lead to "broader ramifications" for the environmental movement as a whole, citing examples of successful college climate activism from Stanford University's divestment from coal to Pitzer College's divestment from all fossil fuels.

But, more broadly, Greenberg said he believes the march has the potential to effect change that goes beyond sending a message to world leaders at the United Nations summit.

"Poll after poll of Americans show that climate change ranks lowest or second to lowest of people's concerns and climate change is an issue that deserves to be at the top of people's priority lists. But it's gotten to a point where if you said the phrase 'climate march' to [the average Columbia student], they might not know everything about it, but they would have a sense of like, 'Oh, that's going on,'" Greenberg said. "And that's really exciting."

The idea of meaningful change being within reach is a powerful draw for students.

"The march will be a message to [United Nations] negotiators that expectations are on the rise," Shreyas Manohar, CC '18, who will be participating in the march, said. "Nations need to rise above their petty squabbles and address this issue on a multilateral level," Manohar said.

Others feel a strong personal connection to the issues at hand.

"Tomorrow, I will be marching because my home state of California is in a crippling drought, because this summer I witnessed firsthand the threats to biodiversity and people's livelihoods in India's tropical rain forests, because the ice sheets I want to spend my career as a geochemist studying and protecting are melting away forever," Jennifer Olson, CC '17, said.

"Climate change is happening, and it's happening now. It's not a debate, it's a fact. Scientists won the argument, but in the face of corporations and governments, we still haven't won the fight," Olson said. "Humanity in the last century has royally screwed up, and as a young person I feel strongly that my generation has a responsibility to act, and act big."