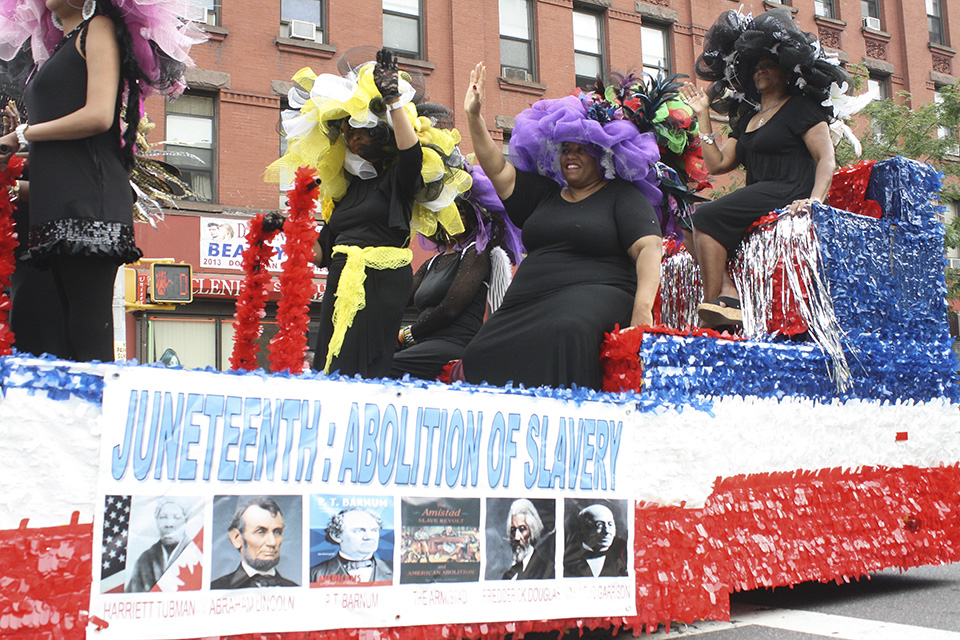 Despite happening at the same time as the People's Climate March, the 45th annual African American Day Parade drew an equally impassioned—if not as large—crowd to Adam Clayton Powell Jr. Boulevard between 110th and 136th streets.

"If there's any parade you should go to, this is it," Mka Tafari, 42, said, showing off her orange dreadlocks on Sunday. "I've been coming here for 15 years. … We gather to celebrate."

"It's perfect," Mary Jane Alston, a resident of Harlem since 1979, said. "The dancing, the bands, the policemen, the firefighters—they're all perfect."

The marching public servants were the day's highlight for Harlem resident Cecily Wilkerson, 32, who said that it was first time she saw black firefighters in the city. According to agency statistics, only about 15 percent of the city's active firefighters are people of color.

"Where else can you see black firefighters?" Wilkerson, who attended the parade with her three children, said. "I think it's great for all the kids to come out and look at, instead of all the violence."

Also in the parade were Chris Waters, 40, and his 3-year-old daughter Olu. Olu sat cheerfully on the shoulders of Waters, who was dressed as the superhero Dreadlocks for the march. The two, attending for the first time, had driven up from Philadelphia earlier that morning.

"That's why we came here, to return and celebrate our African pride," Waters said. "It's fantastic. It's like a big, huge collaboration."

"It might take away a bit, but this day has always been set aside for this parade," Tafari said.

"This is New York," Waters said. "They have multiple things going on at the same time."

Alongside union representatives and high-school marching bands, however, were other groups with more political purposes. A contingent from the NYC Revolution Club held a banner saying "stop the slow genocide of mass incarceration." Members of the Freedom Party held signs like "de Blasio + Bratton = Choke Hold," and "No ways, no means, no Rangel."

The diverse range of participants is perhaps a reflection of the parade's origins in the civil rights movement of the 1960s to promote Black pride in the U.S.

Still, some attendees felt that 45 years later, the parade had lost a bit of its original spirit.

It "used to be much larger and more people," Harlem resident Sheena Smith said. "Over the years, since Harlem started changing, the parade has decreased."

"It's become more diversified in culture. It's not just all black like it used to be," James Gray, an organizer with the Harlem Transformation Project, said. "It's more of a conscious movement, more of an uplifting of the black community."