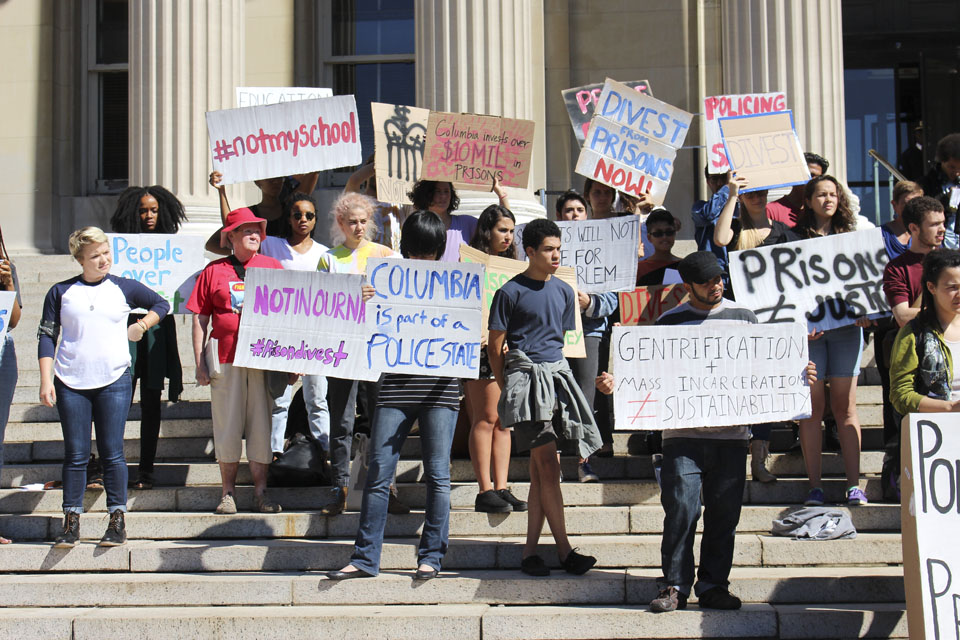 Around 50 students gathered on Friday morning to rally against Columbia's investments in companies involved with private prisons.

Students at the rally, which was organized by Columbia Prison Divest, a committee of Students Against Mass Incarceration, also discussed Columbia's Manhattanville expansion and the recent police presence in the area. Students carried signs that said "Gentrification and mass incarceration  ? sustainability" and "Columbia is part of a police state."

The group said that they found out in December 2013 that Columbia owns around $8 million of CCA shares and $2 million of G4S shares after obtaining a breakdown of how 10 percent of the University endowment is invested.

"We see these two companies as having been major actors in pushing for legislation that has created what we see as mass incarceration today in the United States and around the world," Asha Rosa, CC '16 and one of the organizers of the rally, said.

Rosa said that CPD is asking the University to divest from CCA and G4S as well as pledge not to invest in any private prison contractor in the future.

"I think Columbia pays people millions of dollars to figure out what it can best invest in," Rosa said, referring to Columbia Investment Management Company president Nirmal Narvekar's $3 million compensation in 2011, according to IRS forms. "I think it should be those people's jobs to determine investments they can make that reflect the university's values that it puts forth."

Students at the rally also spoke against Columbia's Manhattanville expansion and the increased police presence in the area following a large police raid on gangs in the Grant and Manhattanville houses.

"I refuse to believe the kingdom Columbia has erected behind a great white wall and ivory tower will last forever. Let us not forget that time destroys kingdoms," Bryant Brown, CC '15, a CPD organizer, said. "It catches up to them. It reveals the precarious foundations on which they rest, and it devours them whole. It exposes the doctrines on which they were built for what they are—lies."

Protesters also said that black students face obstacles even on campus. Justina Walker, BC '15, told a story in which she and a group of her friends were asked to leave the East Campus courtyard by Public Safety.

"I refuse to be complicit in an institution that benefits locking up people who look like me," Walker said at the rally.

The rally occurred at the end of World Leaders Forum "Children in an Age of Sustainable Development" panel. CPD members said that protest was timed to draw attention to mass incarceration as an unsustainable system, especially concerning youth.

"One in 15 black children have a parent behind bars, and Columbia's investment in prisons fuels this violence," CPD member Gabriela Pelsinger, CC '15, said. "We're fuelling a system of violence that sees black and brown children as dangerous and as criminals."

Some World Leaders Forum attendees lingered outside of Low Library to watch the protest.

"I'm not extremely informed about these issues but I'm definitely interested and this is definitely educating me," Meaghan Shevell, GSAS '15, said. "They have a very relevant captive audience coming out of the talk here."

"I really had no context about the issue, but seeing this I would agree [with the students]," Daniel Angel, SIPA '16, said. "You can't preach about helping the community and then be invested in something that hurts the community in the long run."

A University spokesperson declined to comment on the rally but told Spectator that "we always support the peaceful freedom of expression on campus, so long as it complies with the Rules of Conduct."

Correction: Due to an editing error, an earlier version of this article misstated that the value of G4S shares Columbia owns was "undisclosed." The amount is actually $2 million. Spectator regrets the error.