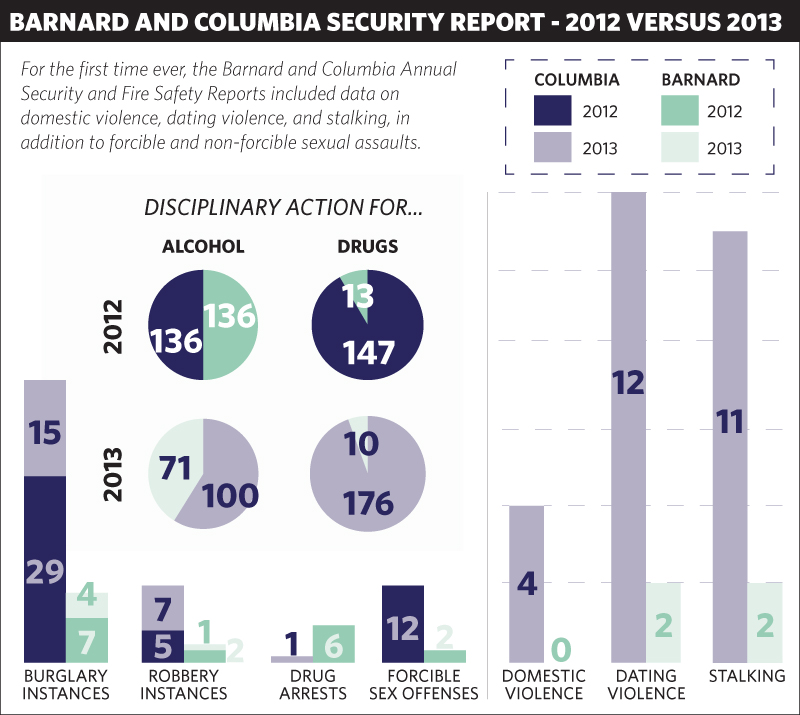 The Violence Against Women Reauthorization Act of 2013 mandated that colleges compile data of these instances and publish them in their annual reports for the 2014-2015 school year. Both Barnard and Columbia included this data in their reports. Barnard Public Safety elaborated in the report that it decided to include the data a year before the mandate goes into effect as part of a "good faith effort."

Also in accordance with the Violence Against Women Reauthorization Act, Columbia changed its categories for sexual offenses from forcible and non-forcible to rape, incest, fondling, and statutory rape, coinciding with the FBI definition.

On Columbia's Morningside campus, 11 cases of stalking, four instances of domestic violence, and 12 cases of dating violence were reported in 2013. This data comes a week after Columbia released the first annual report on how it adjudicates sexual assault, which also included data on domestic violence and stalking.

Two forcible sex offenses were reported on Barnard's campus property in 2013, one of which occurred in residential facilities—an increase from last year's report of zero forcible sexual assault.

Thirteen instances of rape and eight fondlings were reported to have occurred on the Morningside campus.

However, the number of drug law violations referred for disciplinary action at Barnard dropped from 13 in 2012 to 10 in 2013.

Columbia also reported a slight increase in arrest for drug possession—one arrest took place in 2013 as opposed to zero arrests in 2010.

The number of liquor law violations referred for disciplinary action at Barnard also dropped significantly. In 2012, there were 136 instances, which dropped to 71 this year—a 48 percent decline.

Discipline for alcohol reported by Columbia also decreased. One hundred cases were reported in 2013—36 fewer than in 2012.

None of the crimes reported by either school were hate crimes or bias-related.

Crime statistics for both schools are compiled from crimes reported directly to Public Safety and local police precincts.