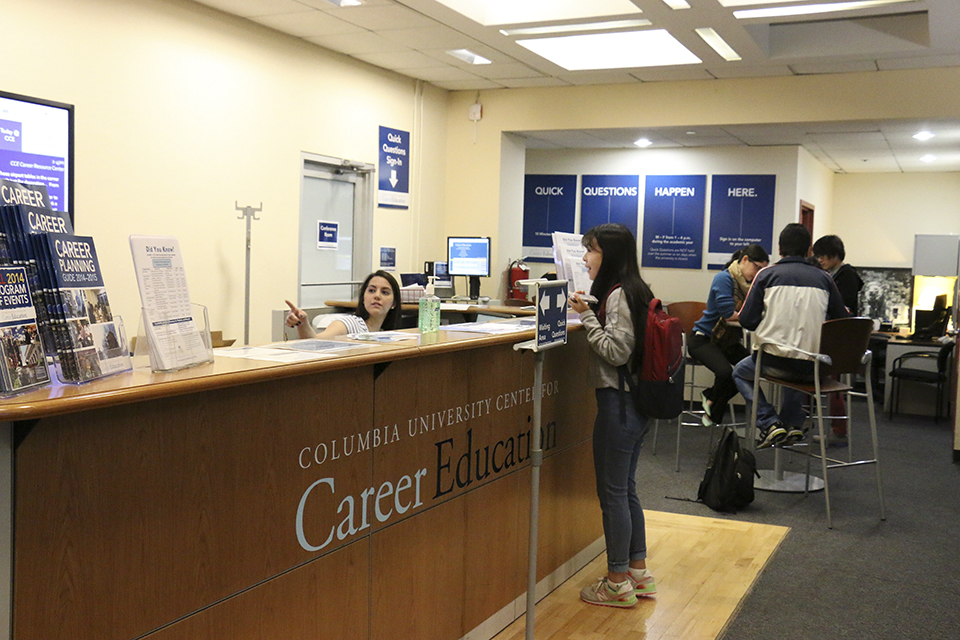 Over the past few years, students have criticized the Center for Career Education for disproportionately offering opportunities in finance and consulting, while neglecting humanities and tech fields.

Three years after the completion of a report detailing the effectiveness of Columbia's Center for Career Education, students are still concerned about the opportunities available at the center.

That report—which compared CCE's offerings and programs to career centers at peer institutions—was never made publicly available. Over the past few years, students have criticized the center for disproportionately offering opportunities in finance and consulting, while neglecting humanities and tech fields.

"The misperception exists that CCE's employer engagement is overly focused on firms in financial services and consulting fields, which, as the career fair data demonstrates, is not the case," CCE Dean Kavita Sharma said in an email. "Of the 8,000+ employers posting over 23,000 jobs and internships in LionSHARE last year, the most represented group came from the not-for-profit sector."

Sharma added that at the fall 2014 Career Fair, which took place on Sept. 19, consulting was the most represented field, followed by the not-for-profit sector and financial services. Health care and engineering were the two least represented fields. 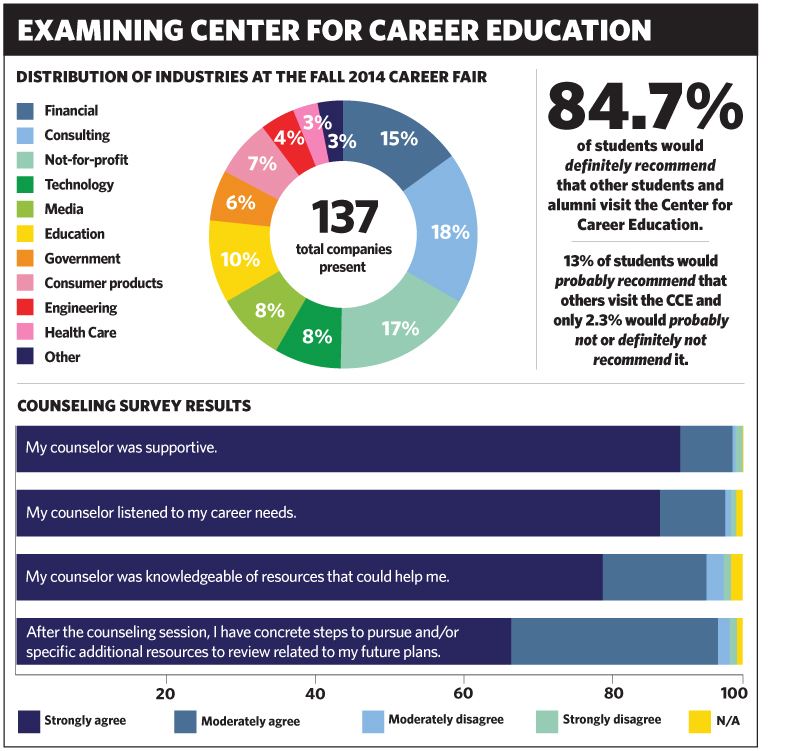 But Sharma said this doesn't mean that these fields are represented less in all of CCE's offerings.

"Career fairs represent just one way that employers seek to hire Columbia students. Hiring strategies and recruitment timelines differ according to industry needs and not all employers have the time or resources to recruit on campus or would benefit from attending a career fair," Sharma said.

Sharma added that some industries were better suited to other events and opportunities that CCE offers, including networking events, internship programs, job postings on LionSHARE, and site visits.

"Not all industries therefore would be represented at a career fair and CCE encourages students to work with advisers to create tailored job search strategies," Sharma said.

But students interviewed this week said they still felt that some fields were disproportionately represented at CCE.

"Lots of employers come to the fair, none of whom are in television or film," Julia Anderson, GS '14, said. "I would like to see improvements made. There are so many humanities majors who don't have jobs."

Natalie Molina, CC '14, a graphic designer, said that CCE's limited ability to draw humanities employers is not due to any failing in its role as a career center, but rather to the job climate for humanities majors.

"The challenge is not that the center doesn't help humanities majors, it's just that humanities jobs are hard to get," Molina said. "Anyone can go on LionSHARE—and sure, it's kind of biased, and all the positions are there for software engineers and people at Goldman Sachs, but there's also positions at the Met and the MoMA and tons of creative positions."

Some students in STEM fields interviewed at the career fair and the CCE office said that they were satisfied with the services CCE provided them.

"They've been very helpful," Elias Charara, a master's student in SEAS, said. "You can ask them anything you want. You can ask about résumés, cover letters, what you should include."

"They seem to have a good way to reach out to students in a quick way ... because everyone is busy. It seems like Columbia is a big school, so it's challenging for them to reach out to all the students, but from what I've seen so far, I think they're doing a pretty good job at it," Baruch Tabanpour, a graduate student in SEAS, said.

"I don't think it's effective. Ten minutes is too short. I was just in a 10-minute meeting, and the advisor just tried to finish it off, even though she didn't finish reading over the papers I presented to her," Wang said. "She just finished the meeting."

Sharma said that CCE's volume of advising increased by 60 percent over the past five years, and that three staff members were added to the office to focus specifically on the needs of undergraduates.

However, it is unclear what findings came out of the CCE report, and if any changes were made to the center based on findings from the report.

"I can't share the consultant's report with you because, like all consultant products, it is based on comparative data shared on the condition of a binding agreement of confidentiality between Columbia and the peer schools participating in the report," James Valentini wrote on his blog in September 2013.

Still, Sharma said that CCE is committed to seeking feedback from students about the center's services.

Sharma said that the center also launched a feature on its website for students to suggest employers, and that CCE is working to launch a survey of its weekly email newsletter, which details which employers are coming to campus and what events are taking place that week.

Correction: An earlier version of this story said that CCE's advising capabilities increased by 60 percent. The center's volume of advising actually increased. Spectator regrets the error.