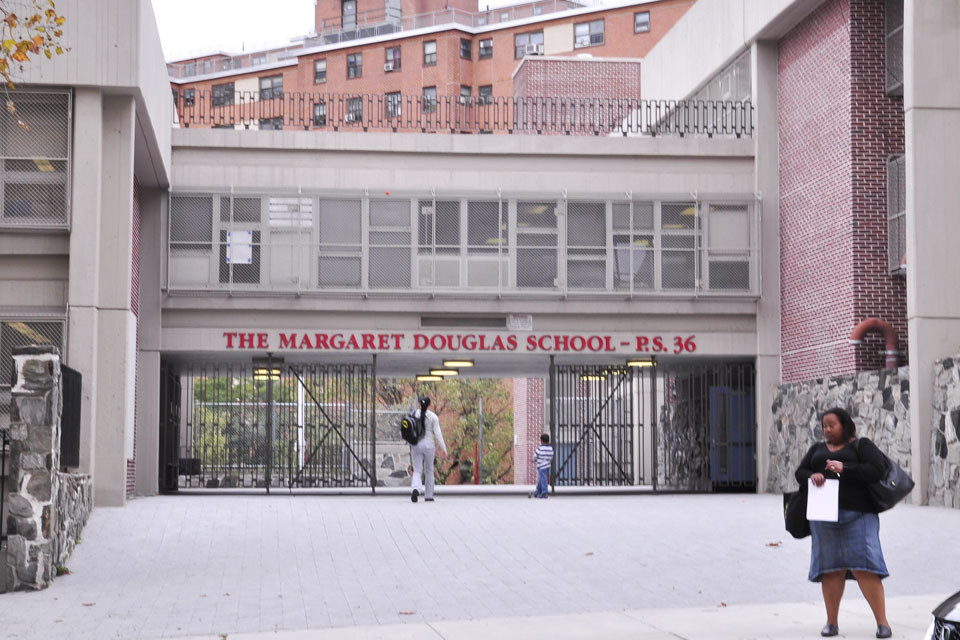 P.S. 36 in Harlem is one of the schools participating in Healthy and Ready to Learn, a new initiative that provides medical screening and treatment to children in low-income communities to improve their chances to thrive academically.

Crystal Griffin is diligent about giving her daughter in kindergarten at P.S. 36 her asthma medication each day. But she knows that not all the parents of her daughter's classmates have the same financial resources to treat their child's medical conditions.

Enter Healthy and Ready to Learn, a new initiative taking root at an elementary school in Harlem aimed at providing medical screening and treatment to children in low-income communities to improve their chances to thrive academically.

"We have kids who come on mobile clinics who have untreated chronic asthma, they miss a tremendous number of school days as a result," said Colby Kelly, senior vice president of marketing and communications at the Children's Health Fund—a nonprofit organization that provides healthcare to low-income families and children across the United States. "They lay awake all night coughing and wheezing, and so they don't feel well enough the next morning to go to school."

Kelly noted that parents without primary care health coverage often allow their children's sickness to persist until it reaches "crisis proportions" and lands them in the emergency room.

"We saw that there were some basic, treatable, manageable health conditions that were just epidemic among the low-income kids that we were treating that was getting in the way of their capacity," Kelly said.

The CHF developed the program in conjunction with Columbia's Earth Institute and is supported by a $1.3 million grant from the H&M Conscious Foundation. Following more than 20 years of providing health care services for at-risk, low-income children, the CHF began to notice a pattern of health issues in students in low-income neighborhoods.

Each school participating in the new initiative added an in-house health coordinator and social worker to help identify and provide guidance for health barriers. Programs such as vision screenings, doctor visits, and new technology like Kinvolved to track attendance are also being used.

The program has been implemented at P.S. 36, as well as two other schools, P.S. 140 and P.S. 49, in the Bronx. This week saw the completion of a vision screening of every student at P.S. 36. From this screening, 21 percent of students were found to have visual problems that had previously gone unrecognized or untreated.

Faiza Khalid, a kindergarten teacher at P.S. 36, is optimistic about the program.

"Vision impacts behavior," she said. "You have to be able to look in order to attend to things."

She added that students with vision impairments take longer to learn the alphabet and sight words that are crucial to learning how to read.

When dealing with these issues in the past, Khalid has tried to connect parents with specific free resources, "but there's always some parents who don't take that step. It takes some of the work off the parents to have a program come in."

Healthy and Ready to Learn brings health coordinators to review student attendance records in order to identify students who may be struggling with an unidentified medical issue. The program also helps parents who may have language and literacy barriers enroll their children in medical insurance programs.

CHF president Irwin Redlener, who co-founded the non-profit with singer Paul Simon, runs the Program on Child Well Being and Resilience as part of Columbia's Earth Institute. He also teaches health policy and management at Columbia's Mailman School of Public Health and pediatrics at the College of Physicians and Surgeons.

Redlener acknowledged there are often-unrecognized health impediments that prohibit learning, which he hopes the program will address.

While some conditions might be easy to spot, such as correcting a child is vision impairment, Redlener said there are also less obvious medical issues that impact academic function.

Redlener explained that the program will screen children for health problems when they enter school, then hire staff who will be able to track and monitor any identified medical conditions that are barriers to a child's learning, and work to treat them.

"There needs to be much constant collaboration between what doctors are doing, the healthcare system is doing, on the one hand, and what is happening in the classroom on the other hand. So we're trying to break down the barriers between the health silo and the education silo," Redlener said.

Sweden-based Maria Bystedt, project manager at the Foundation, noted the expansive possibilities her organization sees in the Healthy and Ready to Learn program.

"Not only is it giving children at Margaret Douglas Elementary School [P.S. 36] better conditions for learning and realizing their own potential, we are also seeing that the model has a good possibility to be replicated and scaled up," Bystedt said.

"The Foundation works on two levels, in fact. We work on both global and local level," Bystedt said. "On a local level, we want to fund projects that have a positive impact directly on the beneficiaries and their communities and on a global level we fund projects that aim to change systems and have a transformational impact on a policy level."

Redlener and Bystedt hopes these three Harlem schools will be a model so the program can expand to other schools in the future.

"We want to be able to prove that there is, in fact, an economic benefit to a school and the local government in doing these investments," Bystedt said. "And once that can be proven, we see that other schools can follow."

Correction: An earlier version of this story that three Harlem elementary schools were participating in the program. Only P.S. 36 is participating. Spectator regrets the error.