Remembering Upper West Side history, one walk at a time

Remembering Upper West Side history, one walk at a time 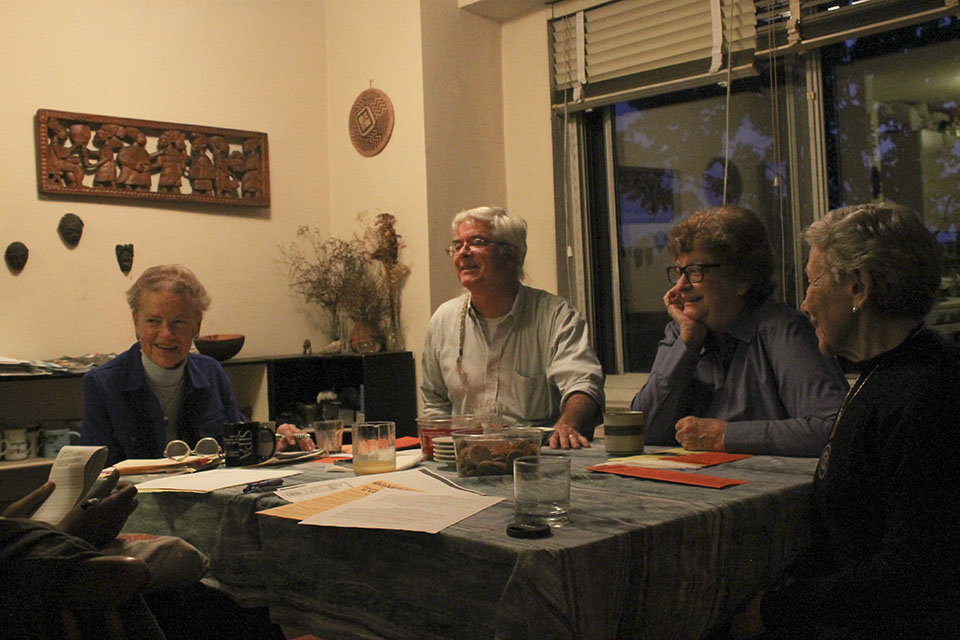 Members of the Bloomingdale Neighborhood History Group reflect on their group's 14-year history on a recent afternoon.

When caught in the bustle of an ever-changing city, it can be easy to forget the past—that Columbia's current campus is located on the former site of the Bloomingdale Insane Asylum, for example.

But a group of dedicated Upper West Side residents is working to avoid that.

The Bloomingdale Neighborhood History Group is run by about a dozen residents who host free conversations and walks to promote the history of the Bloomingdale neighborhood, which stretches roughly from 96th Street to 110th Street between Central Park and the Hudson River.

Founding member Winifred Armstrong said that the group began as the Park West Neighborhood History Group in 2000 by a handful of residents of Park West Village, a collection of residential high-rises along Central Park between 97th Street and 100th Street.

As she responded to the email, Armstrong said she thought that other residents would be interested in the history of their neighborhood. So she reached out to fellow Park West locals including Hedda Fields; Peter Arndtsen, the district manager of the Columbus Amsterdam Business Improvement District; and Pam Tice, the former executive director of the Hostelling International New York hostel at 103rd Street and Amsterdam Avenue.

"The purpose is to discover, illuminate, share, comprehend the history of the people, the place—the relationship of the social to the economic to the political to the spatial aspects of both the history and the present, and how these elements will shape the future," Armstrong said about the group. "And, it's fun."

When researching the history of Bloomingdale, the four early members started with Robert Moses, the 1950s urban planner whose controversial urban renewal efforts destroyed many acres of housing on the Upper West Side. It was during this era that the city built the Park West Village complex, then known as Manhattantown.

The Manhattantown project displaced a historic African-American community that lived on 98th and 99th streets between Central Park and Columbus Avenue. It's a part of history that Armstrong thinks is ever more relevant today.

"We are now entering a third era of a residential community," Armstrong said. Now, there's "the building of Columbus Square and the gentrification of a wider swath of the Upper West Side."

According to a post on the neighborhood history group's blog, the historical neighborhood name "Bloomingdale" comes from the Dutch "Bloemendaal"—a town in the Netherlands that, like its American namesake, borders the city of Haarlem. Today, the name is linked to several local institutions, like the Bloomingdale branch of the New York Public Library, where the group began its own collection—the Bloomingdale Library Neighborhood History Collection—in 2003.

The group is informal and doesn't have much structure—when asked about their individual roles within the group on a recent afternoon, the four local history buffs could only laugh.

Despite this lack of official structure, the group reaches a sizable audience—it has a 900-person listserv, and the leaders say their events regularly draw up to 100 people. While most attendees are from the surrounding neighborhood, some come from other boroughs.

Among the highlights of her experience, Tice recalled a talk about the history of the Joan of Arc statue at 93rd Street and Riverside Drive in 2011—timed to coincide with Joan of Arc's 599th birthday—and another about the architecture of the neighborhood's historical school buildings.

"I think what makes the talks really interesting is you find out new things that you didn't know about before," Tice said.

Upcoming events include a celebration of the 110th anniversary of the Interborough Rapid Transit subway later this month and a series on the history of medical institutions in the neighborhood starting in November.

Tice said that although she initially thought it would be difficult for the group to keep its momentum, opportunities for expansion have constantly presented themselves.

While the group spends a lot of time painting a picture of what came before, its members are highly conscious of the evolving nature of the neighborhood.

Arndtsen said that the group's earlier talk on historic school architecture gave them insight into modern school construction projects. And moving forward, he said that the group plans on tackling issues like the environment, education, and transportation.

"History is the past, present, and future. And links," Armstrong said.