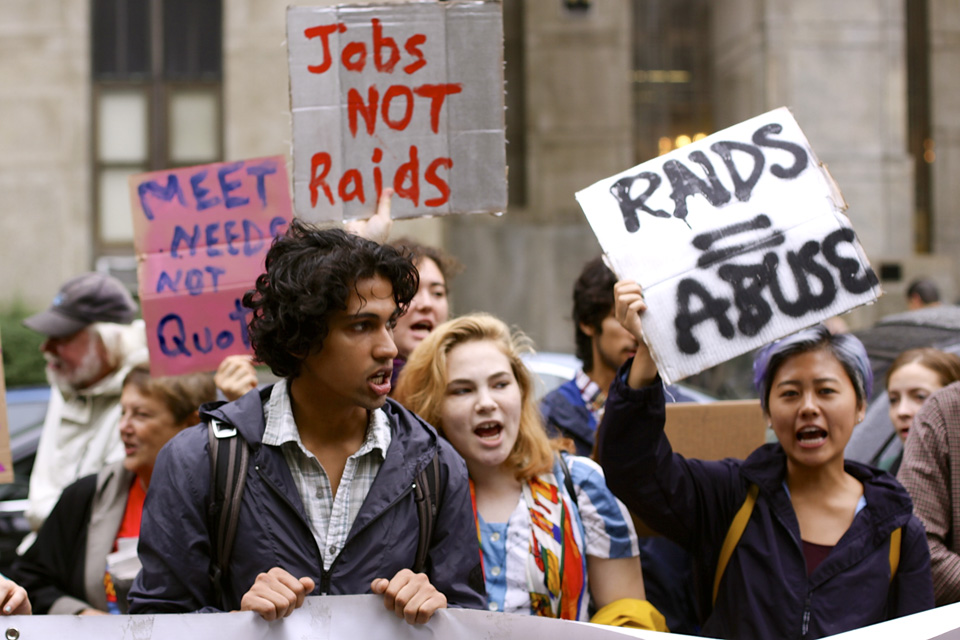 Columbia students and anti-violence activists protested outside of the Manhattan Criminal Court on Thursday morning, calling for an end to the heightened police presence in the area.

Five months after June's massive police raids at the Grant and Manhattanville Houses, the families of those arrested stood in a crowded eleventh floor hallway on Thursday morning, waiting to be let into the courtroom where their sons and daughters would appear.

With 39 appearances scheduled, space was tight in the small courtroom as families of those arrested were joined by Columbia students and antiviolence activists at the Manhattan Criminal Court.

"I applaud the young people from Columbia University for standing up in solidarity," antiviolence activist Taylonn Murphy said at a protest before the appearances, where over 50 Columbia students—including members of Columbia Prison Divest—gathered with city activists from the Stop Mass Incarceration Network, among other groups.

Murphy's daughter Tayshana "Chicken" Murphy was murdered at the Grant Houses in 2011, an instance of violence that reignited longstanding tensions between the neighboring Grant and Manhattanville Houses.

Before June's raids, the New York Police Department had been conducting an investigation regarding gang violence at the houses since 2010, but family members of those arrested said on Thursday that the violence would be better addressed by reintroducing youth programming to the community.

"They used to have gyms, they used to have after school programs," said Diane Guzman, whose son, Robert "Poopah" Nelson, was arrested in June. "They took away everything."

Anthony Stafford, whose son was arrested in June on charges of conspiracy to commit murder, grew up in the Grant Houses in the 1960s and said that things have changed.

"There was always something to do," he said of his teenage years.

But, Stafford said that he understands why the city decided to conduct mass arrests rather than directing resources to the community.

In New York City Housing Authority buildings like Grant and Manhattanville, tenants must remove the names of incarcerated family members from apartment leases, or risk losing their housing.

"The police aren't protecting us—they're trying to throw us away, " Michelle Doles, mother of a defendant named Paul Washington, said. "The police sat on this for four years. They didn't step in. There was no mediation because they wanted us to just go away."

Columbia students who gathered outside the hearing said they were there to show Grant and Manhattanville residents that they are not supportive of heightened policing in the neighborhood.

"It's very obvious that the policing and incarceration of young people today is supported and happening because of the alleged protection of me as a Columbia student," Gabriela Pelsinger, CC '15 and organizer for Columbia Prison Divest, said. "But this does not keep me safe. It does not keep the community around us safe."

The students who gathered outside the court on a rainy Thursday morning chanted, "No justice, no peace, no racist police."

"Every Columbia student should be here with the message that we will not be an excuse for policing Harlem," Asha Rosa, CC '16 and another CPD organizer, said.

Taylor Koss, an attorney representing Grant resident Robert "Poopah" Nelson, said that while nothing was set on Thursday except a future court date on Dec. 17, the charges facing many of those arrested are serious.

"I think a lot of people are going to go to jail for a very long time," he said.

But Guzman, Nelson's mother, said those issues did not stop the courts from having Nelson testify during the Tayshana Murphy case, although the two were close before her murder.

Several family members said their sons' actions were understandable, given the lack of resources offered to help them cope with mourning over violence and lost loved ones.

Stafford's son lost his mother when he was seven, according to his father. "I don't think he really came to terms with that," Stafford said.

"It wasn't a search, so you had no business coming through my apartment and putting me in handcuffs," Tyeast Grissom, whose son was arrested in June on conspiracy charges, said, recalling the raid.

"The police that were in my house were having a conversation in front of me about media coverage," Guzman said. "That's not a good feeling, that you're using me to get a promotion."

Meanwhile, according to Doles, calling the youth violence at Grant and Manhattanville a gang feud—as some media reports have done—obscures the fact that the safety of the community was rarely in serious question before the raids.