A college for women, challenging norms since 1889

A college for women, challenging norms since 1889 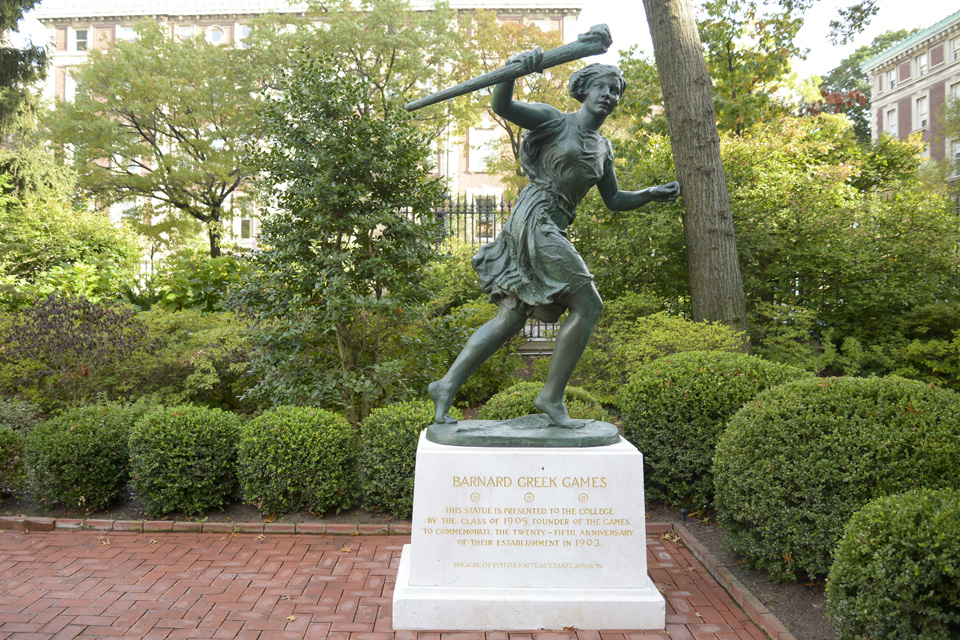 One hundred twenty-five years ago, women werent allowed to receive a Columbia undergraduate education. Barnard was founded to change that.

This story is part of a special issue examining Barnard College's past and future in its 125th year. Check out the rest of the issue here.

Women weren't allowed to receive a Columbia undergraduate education 125 years ago. Barnard was founded to change that.

So goes one version of the story. But Barnard educators say that since Barnard's founding in 1889, the purpose of the school has gone beyond simple questions of access.

Today the focus, for many Barnard students, has shifted from disrupting overt legal inequalities to engaging with the subtler, more systemic forms of gender oppression.

'A different kind of education'

Establishing a separate women's college affiliated with Columbia was not the original plan. Columbia University President Frederick Augustus Porter Barnard was determined in 1879 to make Columbia a coeducational institution.

But the University's board of trustees repeatedly denied the proposal for a number of reasons, according to Barnard history professor Robert McCaughey, who's currently working on a book about the college's history.

As a compromise, Columbia developed a parallel set of courses to be taught by faculty members to women off campus, which would offer degrees to women who passed a set of exams. One of the students in that program was Annie Nathan Meyer, who would help convince the Columbia board of trustees to open up a women's institution.

"She's not trying to provide coeducation to Columbia, she's trying to get women a comparably good education that presumably the Columbia men were getting," McCaughey said.

The college was named after the Columbia president who had pushed for co-education, but, according to McCaughey, Barnard wasn't too happy with the consolation prize of a separate women's institution.

"To him, Barnard was a defeat," McCaughey said. "Because—and he was dead on the money—that meant that Columbia College would not have to deal with the prospect of becoming coeducational if Barnard was right across the street."

Barnard welcomed its first 14 students in 1889 in a brownstone on Madison Avenue. In the 1890s, Barnard moved to its current campus in Morningside Heights. The first students, according to McCaughey, were a mixed bag.

"A few students who would have been perfectly at home at Wellesley and Smith but stayed at New York and went to Barnard because their families felt more comfortable with the idea of them staying home. Some of them stayed home because they were going to be debutantes," McCaughey said. "You also then get some women for whom the fact that you could live at home made it considerably less expensive than going away to Holyoke or Bryn Mawr."

Barnard's mission, from the beginning, according to Kitty Kolbert, director of the Athena Center for Leadership Studies, was to challenge societal norms.

"Women were for the most part owned by or an auxiliary to their fathers and husbands," Kolbert said of the legal status of women at the time of Barnard's founding. "Founding an institution like Barnard, which saw women as independent, autonomous decision makers was in some ways a very radical statement."

"To me, that's a very proud tradition to be a part of," she added.

Throughout the 20th century, Barnard's student body and campus continued to grow. Its graduates became more professionally successful. But the coeducation question that Barnard had proposed back in 1889 would come back to the table in the 1970s, leaving the identity that Barnard had created for itself in flux.

Barnard Dean Avis Hinkson, BC '84, was a student representative to the board of trustees when the College revisited the question of its independence and said that the discussion defined the campus at the time.

"I think the folks that were hopeful that we wouldn't merge were also a bit anxious. It was a big undertaking to say that we could afford it financially, what would the future look like, would we be here 30 years later?" Hinkson said.

Many Barnard students, administrators, and faculty members feared that the decision to merge with Columbia would result in the complete loss of Barnard—a similar fate suffered by Radcliffe College when the school merged with Harvard in 1977, ultimately becoming consolidated in 1999.

So Barnard fought to stay independent, ultimately signing an arrangement with the University that allowed the two institutions to share facilities and maintain cross-registration.

"It was a big decision—one that had very difficult implications for us—but we made it, and we made it work," Hinkson said. "For me to come back 30 years later and see that not only are we here, but we're thriving."

A focus on leadership

In the decades following the decision to remain independent, Barnard has tailored its curriculum to include a focus on women's leadership and a discussion of feminism and what it means today.

According to Margaret Vandenburg, the director of the First Year English program at Barnard, one way Barnard enables this kind of education is through its approach to canonical texts.

"We are trying to walk a fine line, because we want to give students, and in this case women, the tools they need to join in a larger cultural conversation," she said of the program's curriculum.

Fifteen years ago, that curriculum changed, adopting more titles traditionally associated with the literary canon. Students choose from three seminars—Women and Culture, Legacy of the Mediterranean, and The Americas—all of which intersperse well-known with less frequently read texts.

But Barnard students absorb more than "cultural literacy" from the books they read, according to Vandenburg.

"We have a traditional curriculum," she said. "But we have revisionist methodologies, which mean that you use lenses, including gender, to address the dynamics of power in these traditions."

Barnard's continued focus on women's issues also ensures its support of research on women's issues, according to Janet Jakobsen, director of the Barnard Center for Research on Women. Founded in 1971, BCRW is the oldest center of its kind in the country.

And while different strains of feminism have been at the forefront over the years, BCRW's current emphasis is on finding the intersections between feminism and other issues.

"We're interested in the ways feminism figures into larger social justice movements," Jakobsen said, describing BCRW's past work documenting the National Domestic Workers Alliance campaign to pass a bill of rights for their members. "Part of what social justice feminism is about is everything is a women's issue."

Another important component of Barnard's leadership efforts is the Athena Center for Leadership Studies, which launched in 2009 under Barnard President Debora Spar.

In an interview, Spar said that the purpose of the center is not to direct students to specific fields, but rather to provide "the skills and the competencies that young women can learn that will serve them well in any field they might pursue."

According to Kolbert, women's leadership is also crucial to Barnard's mission. Through programs like the Athena Scholars Program, Kolbert attempts to both "improve the capacity of women to lead and change the culture of leadership."

"However much improvement there has been, only 18 to 22 percent of leaders across sectors are women," Kobert said. "Our leaders are still men—they're still white men."

Part of the reason Barnard is able to foster this type of education is that the all-female context creates a "safe space," according to Kolbert.

And then there's the question of relevance and why women's colleges are necessary when conditions have improved for women.

"I did not want to come to a women's school. At the time, my impression of a women's school is women in nice skirts, sitting nicely, and learning how to knit," Julia Qian, BC '14, said, adding that her parents living in China had a similar impression, considering women's colleges a bit old-fashioned.

But Qian said she ultimately came to realize how empowering Barnard was.

"We all say bold and beautiful," Qian said. "However how that translates to me, is if you see a woman walking on the street, the way she holds the space, the way she carries herself and the way she brings the air around her, you know that's a Barnard woman."

Safe, but not too safe. Educators and alumnae were quick to point out that attending Barnard does not offer students a four-year escape from sexism that students still face today.

"While amazing strides have happened for women in this country and across the world, we still have a ways to go," Hinkson said. "And there's still a need for an environment that's committed to that."

"Sexism is not over," Jakobsen said. She added that the Barnard-Columbia relationship has a "bubbling sexism" of its own, recalling President Barack Obama's, CC '83, decision to speak at Barnard's 2012 commencement, and the wave of angry reactions that ensued.

Diane Webber-Thrush, BC '90, who attended Barnard during Columbia College's transition to a coeducational campus, said she remembered little "animosity" between the schools.

"There wasn't that type of public forum," she said—referring to the Internet, where many of the most adamantly misogynistic sentiments have been expressed. "If people thought that, there wasn't a way to spew it everywhere."

But rather than offering a reprieve from sexism, women's colleges are intended to provide an emphasis on empowerment, according to former Barnard President Judith Shapiro, who called them "a power base for women."

Barnard administrators say that the college's emphasis on leadership puts them in that position to continue to be successful—though Spar doesn't think the question about why women's colleges remain relevant will be going away anytime soon.

"We will always have to make the case for women's education," Spar said. "I think we have to be comfortable and confident in making a very strong case."

This story is part of a special issue examining Barnard College's past and future in its 125th year. Check out the rest of the issue here.