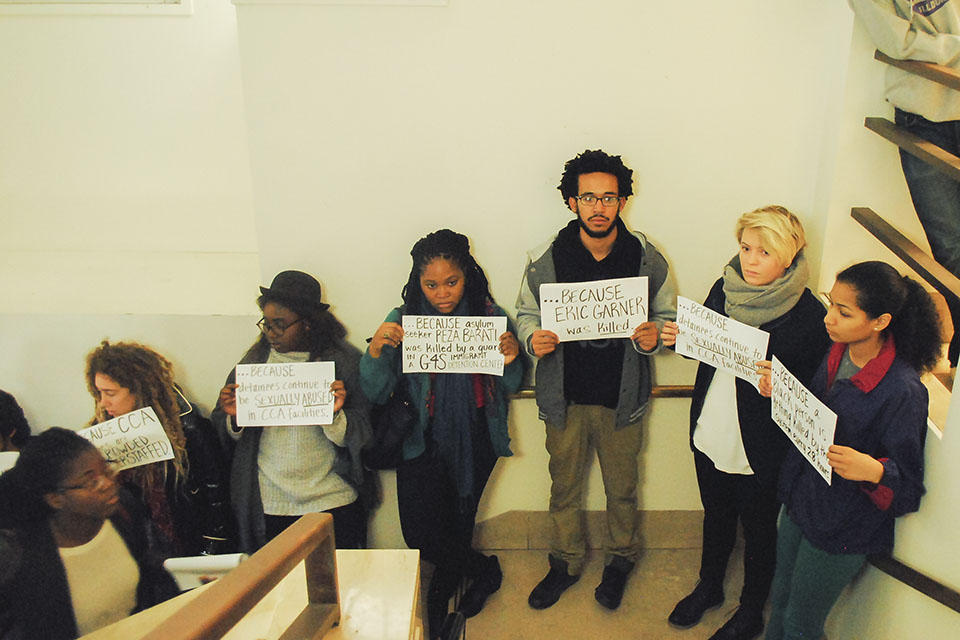 Members of Columbia Prison Divest held a protest and speak-out against the University's investments in private prisons for the National Day of Protest to Stop Police Brutality on Wednesday afternoon.

After gathering at the Intercultural Resource Center, around 25 students marched to University President Lee Bollinger's Freedom of Speech and Press class in Schermerhorn Hall and silently held signs outside the classroom.

As Bollinger walked into the building, students then unfurled a large banner saying "Columbia Prison Divest: Meet With Us." One student read aloud the names of people killed by police since CPD first demanded a meeting with the president in February.

"Columbia invests in a system where a black person is killed by police or security every 28 hours," another protester said.

According to protester Ella Every-Wortman, CC '16, before walking into the classroom, Bollinger first said, "You don't have to do this," and then that he would be willing to meet with CPD.

"Our specific demand is to get a meeting with President Bollinger, which we've been asking for for eight months now," said Asha Rosa, CC '16, one of the organizers of the protest and a member of CPD and Students Against Mass Incarceration, before the protest.

"We want to see Columbia divest from the private prison industry," Rosa said. "We've been very careful in framing that within a larger mass incarceration movement."

After Bollinger entered the classroom, the group filed out of the building past curious bystanders and confused security guards to the Sundial, where they hosted a speak-out.

"We have a responsibility as students who have access to resources that have either been stolen or forcibly taken," CPD member and organizer Bryant Brown, CC '15, said. "We have a responsibility to disrupt that process … a process that I would argue is inherently violent and is always going to result in the destruction of those communities in the process."

"Columbia says the expansion is for the students," Rosa said. "They are investing in people, but it is inherently placing certain people above others."

"We're here in supporting your cause because you came out to support our cause," Haynes said.

"We're here to stop the chaos and we need you. You're their [those arrested's] peers and you give them hope," Murphy said. "125th and Amsterdam is no different than 116th and Amsterdam. We're all one community."