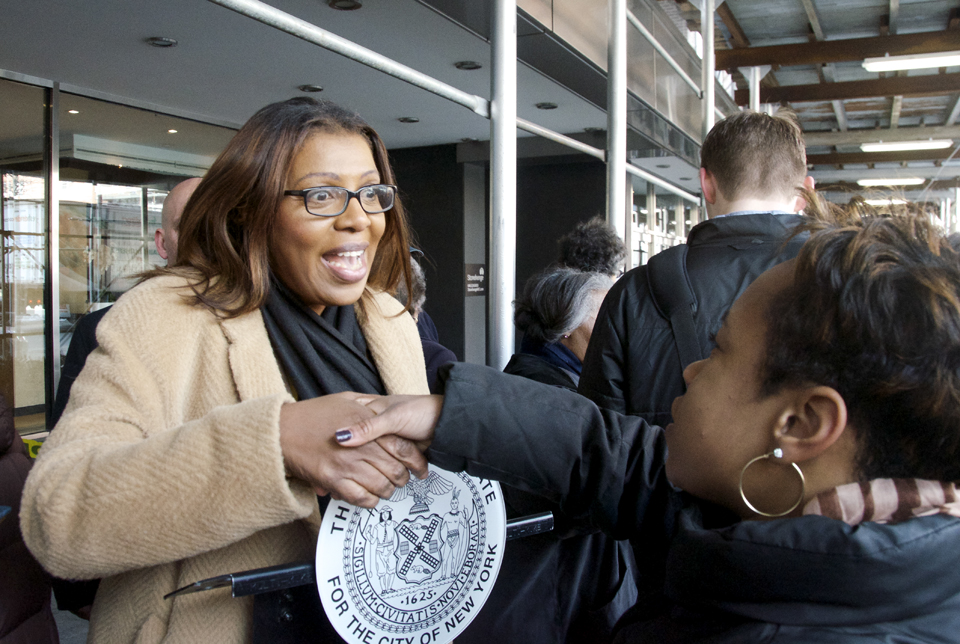 Public Advocate Letitia James introduced a bill to the New York City Council on Wednesday that aims to improve the services and information available to victims of sexual assault at the city's universities.

The NYC Campus Safety Act would mandate the city to provide information about support services to victims of sexual assault—including an app identifying where sexual assaults have occurred—establish response and prevention education programs in colleges, and create a task force to improve how city agencies respond to college sexual assaults.

"Now is the right time to expand resources and develop better standards to ensure that students have proper tools and education to address college sexual assaults," James said in a statement. "In the last few months, my office has meet with students, advocates, and policy-makers to identify a plan to ensure that students in New York City have all the protections needed to address this under-reported crime."

Unlike when James first proposed the bill in May, Wednesday's draft no longer included language mandating colleges to report sex-crime statistics monthly or establishing an NYPD liaison to colleges.

The former means that for Columbia, little will change in how the University addresses sexual assault cases since the bill only addresses the city's additional responsibilities.

No Red Tape Columbia member Zoe Ridolfi-Starr, CC '15, said that James' office reached out to her group in the spring to discuss the proposed bill, and that they have been in constant contact since.

"Before they had been consulting with us, they had been working with larger, national organizations," she said. "On campuses, survivors and advocates have a very specific perspective … so it was very important for us to be able to have those meetings with her team, and advocate for student survivors in that context."

Ridolfi-Starr said that the establishment of an NYPD liaison was something No Red Tape and other activists vocally opposed during the discussions.

"Just given the lack of trust survivors have for the NYPD, it seemed like an extremely inappropriate department [to be involved]," she said. "We were very strongly advocating for them to move away from an approach centered on the NYPD."

After introducing the bill on Wednesday, the council referred it to next Monday's Committee on Higher Education hearing, where campus activists will testify in favor of the legislation. City council members are also set to discuss a resolution urging U.S. President Barack Obama, CC '83, to sign the federal Campus Accountability and Safety Act.

"I'm concerned about protecting victims both on campus and in the surrounding neighborhood. We had a rape, sadly, on Central Park West. I wish this didn't affect every element of our community, but it does," he said on Tuesday at a rally against construction noise.

"We need to do everything to make sure that the new standard is not just 'no means no,' but 'yes means yes,'" he added. "If there is not active consent, then it's simply not acceptable for people to impose themselves on others sexually."

When asked about his thoughts on the sexual assault activism movement at Columbia—which resides in his district—Levine said, "Other than providing moral support, I don't know if I have direct jurisdiction over the University's rules, but I want to strongly lend my voice to those who say we need the highest standard and the strictest enforcement and the most serious penalties for those who are sexual predators in our midst."