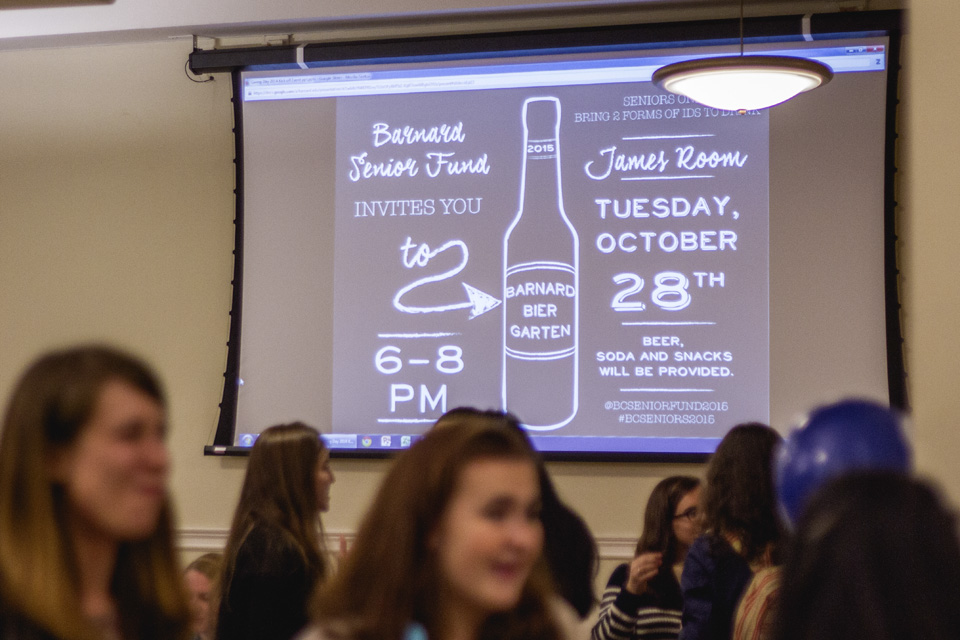 Barnard's Class of 2015 will give funds to the Bear Essentials Program, which gives winter clothes, books, bedding, and other essential college supplies to students who need the financial support, for its senior gift.

Barnard's supplemental financial aid program will be getting much-needed funding next year, thanks to the class of 2015.

The class of 2015 will donate a minimum of 75 percent of the funds raised for its senior gift to refinance the Bear Essentials program that has been out of funds for the last year, the senior fund co-chairs announced Tuesday night.

The Bear Essentials fund—established by the class of 2010 as the contingency fund, and renamed by the class of 2011 in honor of Millie the Dancing Bear, Barnard's mascot—gives winter clothes, books, bedding, and other essential college supplies to students who need the financial support.

This year's senior class gift will fund the Bear Essentials program for another five years, until 2020. Though students on the senior fund committee said the program needed funding, it was unclear whether the program would have continued by other means outside of class gifts.

"The class voted on Bear Essentials, which we're really excited about," said Nikila Kakarla, BC '15 and co-chair of the senior fund committee. "It's kind of an unknown thing, but once they read about it, I think people were compelled to choose it, because it gives back to a population of Barnard that we don't really know exists that much."

Bear Essentials was originally funded by gifts from the founding class of 2010 and subsequent donations by the classes of 2011 and 2012, but has not been added to since then. The class of 2014 proposed donating to the Bear Essentials Program for their senior gift last year, but ultimately chose to give an expendable scholarship to one student in the class of 2018 and to restore the Greek Games Statue.

"It's really an opportunity for us to give back to a large group, and not just one student," said Delaney Wing, BC '15 and the other senior fund co-chair.

"This is a wonderful way for graduating seniors to support fellow Barnard students, by giving back and providing funds that make a tremendous difference to the recipients and their success at Barnard," Nanette DiLauro, Barnard's director of financial aid, said in an email to Spectator. "I am extremely grateful and happy to hear that the Class of 2015 will continue the tradition of making financial aid part of their legacy."

The senior gift was announced at the "Barnard Biergarten" event to kick off the University-wide Giving Day, a day-long fundraising push and competition among Columbia's 16 schools and programs.

Barnard seniors at Tuesday's Biergarten event said they were satisfied with where the senior funds were going.

"Going to college is expensive, and there are a lot of expenses that you don't expect, and so I think it's good that we're giving special aid to low-income students, because it's so fucking expensive," Alicia Vasquez-Crede, BC '15, said.

Additionally, a small portion of the senior fund will go toward planting a tree behind Barnard's Greek Games statue that was knocked over during Hurricane Irene—the same week that the class of 2015 moved onto campus.

"We thought it was a good way to replace it and leave a living memory on campus, something that will grow with us," Kakarla said, adding that the specific kind of tree is still to be determined.

The senior fund committee hopes to reach $30,000 and to get 80 percent participation, attempting to surpass last year's achievement of $26,000 raised and 72 percent class participation, Kakarla said.

The Annual Giving Committee, a group of alumnae volunteers responsible for assisting in the development of the alumnae annual giving program, pledged to donate $5,000 to the senior fund if 15 percent of the class—approximately 95 students—gives by the end of Giving Day on Wednesday.

Additionally, Barnard Dean Avis Hinkson, BC '84, announced that she will donate $125 to the senior fund for each percentage of participation that exceeds 15 percent.

"I'm confident that the class that arrived with Hurricane Irene and made me sleep in the residence hall for a night in that tiny little twin bed to be with some of you that first night, I'm confident you could do so much more than 15 percent," Hinkson said.