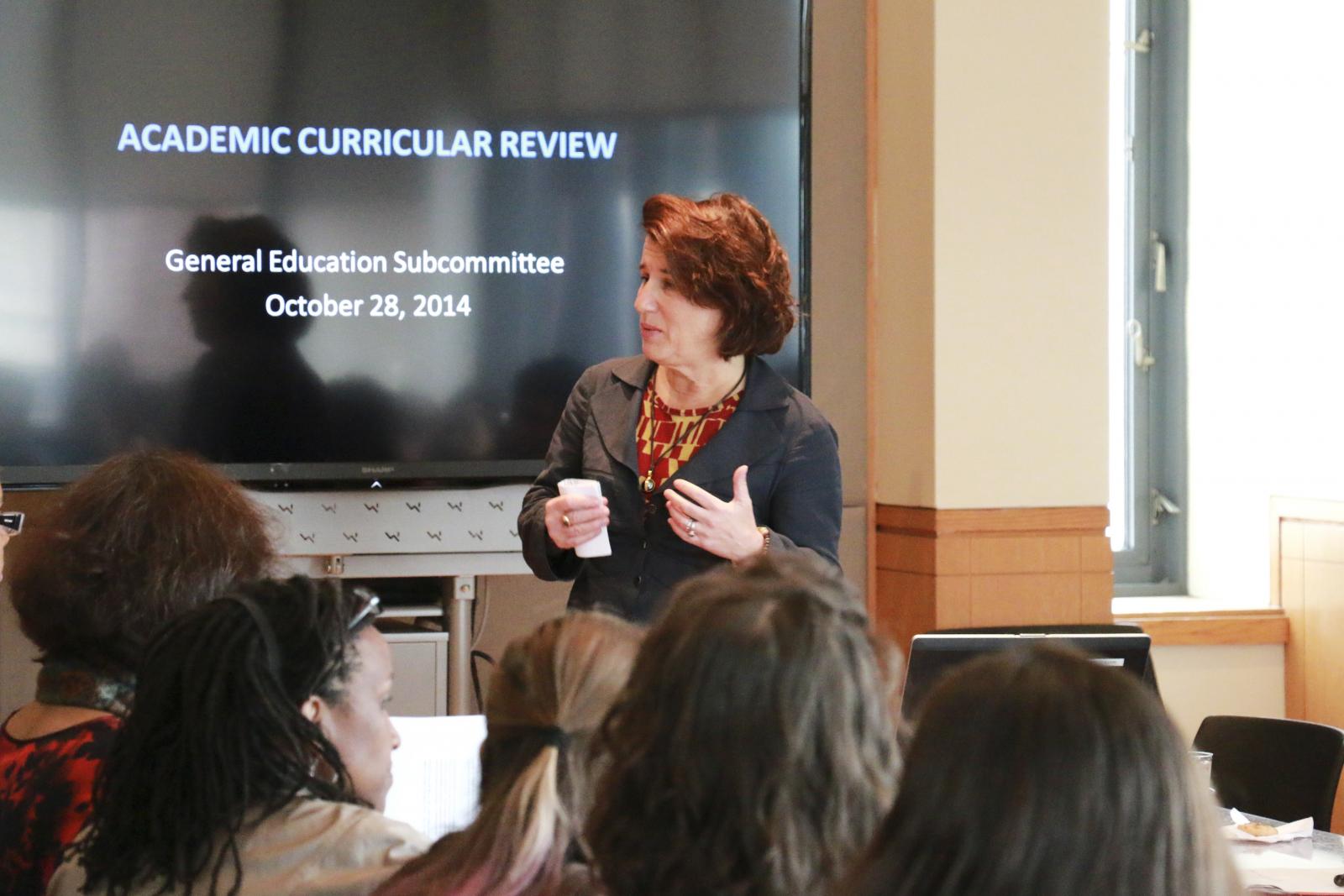 At the second Academic Curricular Review session on Tuesday afternoon, over 80 students discussed the Nine Ways of Knowing and course requirements.

Over 80 students discussed the Nine Ways of Knowing and course requirements at the second Academic Curricular Review session Tuesday afternoon.

The session, which is designed to allow students to give input as Barnard undergoes a review of its curriculum, was moderated by SGA rep for academic affairs Amanda Ruiz, BC '17.

Tuesday's session drew a much larger crowd than the first session, at which only five non-council students attended.

"It's very gratifying that so many students turned out," Barnard Provost Linda Bell said. "We absolutely need student input."

Students raised concerns about the size of the Nine Ways of Knowing and the difficulties accompanying the completion of the general education requirements along with major classes—especially for those planning to major in a science, technology, engineering, or math field.

"For science majors or people who are pre-med, they have so many requirements they have to get done that it's really inconvenient to have such a large breadth," Sara Heiny, BC '17, said.

Heiny suggested that instead of making all Nine Ways mandatory, students should be able to complete only seven of the requirements. She said that fewer requirements could allow students to have more opportunities to explore topics they're interested in and not have to worry about fulfilling the general education requirements in time for graduation.

Many other students questioned the lack of a technology-based requirement within the Nine Ways of Knowing.

"I think that the students have made it clear that technology is an integral part of being a productive member of society, getting a job, feeling ready for the workforce—so I think it's great that students voiced that," Sarah Shuster, BC '15, said.

Many students voiced their support for a technology-based course to be incorporated into the curriculum in the future instead of adding an entirely new general education requirement.

"I think especially now when we have so many computer science majors, ... it would definitely be a step forward to break the lab requirement down," Heiny said. "Physical science and then your technological sciences ... because it is a growing field, and 15 years ago, when they had the last academic curricular review, the technology probably wasn't as huge as it is today."

When Bell polled the room about potentially adding a broad technology requirement to the Nine Ways, most students voiced their support.

"As a humanities major, I am very invested in Barnard remaining a liberal arts school," Shuster said. "But I don't think that adding STEM or making coding a language or thinking about how technology can count as a lab requirement would detract from that."

"The enthusiasm from the student body came out loud and clear," Bell said after the meeting. "It's now something we'll take back to our committees and consider seriously."

Another concern voiced by students was that the current language requirement was too difficult to fulfill.

"I'm in Spanish right now, and I was lucky enough to get into all the classes I needed, but I know people that started and couldn't get in next semester, and now they're in a class that feels a little too hard for them," Emily Jones, BC '17, said.

Noor Dhadha, BC '16, asked about the difference between Barnard's Pass/D/Fail policy and Columbia College's policy, which allows students to check and uncover their letter grades at the end of the semester for classes that they elected the Pass/D/Fail option.

"These are our peers at the University who take the same class," Dhadha said. "If I were to take chemistry as an English major, I would want to P/D/F that class just in case I were to do badly, but I still want to take that educational risk and have the option of taking that risk, at the same time put full effort into the class—not taking it lying down as if I'm going to do badly, but put some incentive to do well and then uncover it."

Shuster said she thought the high turnout was impressive, especially considering that none of the students in attendance would actually be able to experience any of the changes.

"I think that it speaks to just how much Barnard students care about their academics," Shuster said. "How much they care about the changes that are made."