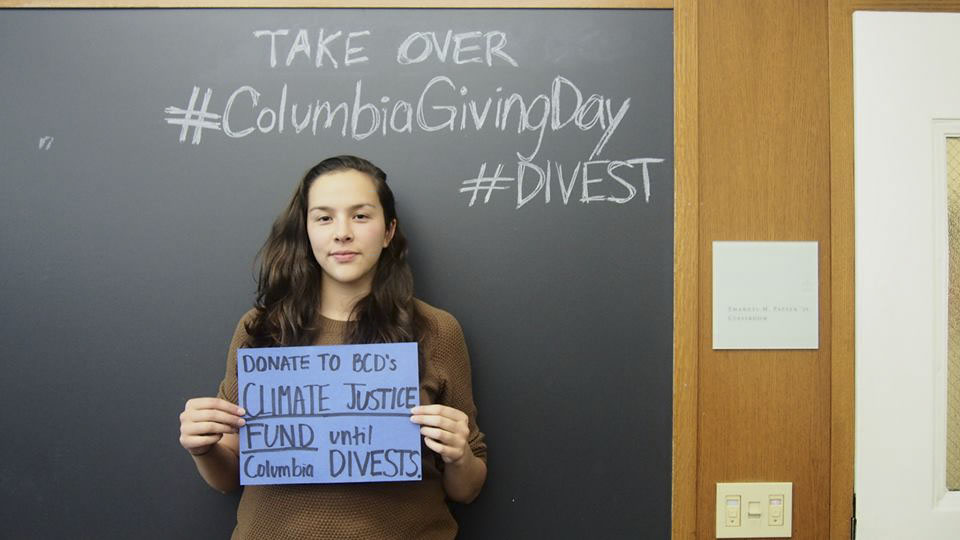 Barnard Columbia Divest has created an alternative fossil-fuel-free investment fund that donors can give to until the University divests from fossil fuels.

Barnard Columbia Divest for Climate Justice is organizing its own endowment fund as part of its efforts to push the University to divest from fossil fuel investments.

The Fund for a Responsible Columbia, which opened for donations on Wednesday—was also Giving Day—will be held in a fund created by BCD and independently invested. If Columbia agrees to BCD's demands for divestment within the next two years, the money will be deposited into the University's endowment. If Columbia doesn't agree, the money will be used to benefit environmental groups around the country.

Club leaders said they hope the new fund will raise awareness about divestment and provide an alternative route for people who want to donate without contributing to climate change.

A pledge page created on Monday had garnered $983 in pledged donations from 31 people as of Wednesday night.

"We're going more for quantity of donors than quantity of money," BCD leader Iliana Salazar-Dodge, CC '16, said. "It's important that these are people who wouldn't normally donate to Columbia. The fact that these people are deciding to vote on this issue with money is really important."

"Even if the donations are small, the administration does still feel some sort of duty towards its constituents, whether those constituents are alumni or students," another BCD leader, Michael Greenberg, CC '16, said.

While the pitch for donations is simple—give to BCD's fund instead of Columbia's endowment until the University divests—the allocation of collected funds is a little more complicated.

BCD has set two deadlines, May 2015 and May 2016, by which point Columbia must provide a BCD representative with written agreement of its commitment to divestment and create a reinvestment committee, in order to receive the available balance of the fund.

According to the funding page, if Columbia fails to meet the terms by May 2015, 25 percent of the balance at the time will be donated to the Divestment Student Network to be used for stipends for student organizers. Another 25 percent will be used to provide support to community organizers "working on cooperative and sustainable economic development and other forms of progressive political mobilization."

If the University still hasn't met BCD's terms by May 2016, the remaining funds will be split equally between DSN and community organizers, and BCD members and fund advisers will decide collectively whether or not to close the fund completely.

"The decision regarding what organizations will receive that 25 percent will be made by the members of Barnard Columbia Divest for Climate Justice, or its successor organizations, via a process guided by the fund Advisors," according to the BCD funding page.

The fund itself was created through the Responsible Endowments Coalition, an organization that creates fossil-fuel-free investment portfolios and helps in the investment process. Donations are deposited into a donor advised fund held at the nonprofit Triskeles Foundation. BCD members Amy Wang, CC '18, and Elana Sulakshana, CC '17, are signatories on the fund, along with an adviser from the Responsible Endowments Fund.

While divestment has become a campus buzzword, reinvestment is still a relatively unknown effort.

"The idea is to invest in local communities and economies that can be resistant in the face of climate change," Salazar-Dodge said. "Once those groups and organizations have started creating projects that will become sustainable we're going to start lending money to communities. The idea is that some of it will go to student organizing and to community projects."

"The money in no way is going to go to BCD," Jougla said.

While BCD leaders recognize that their alternative endowment is negligible next to Columbia's $9.2 million endowment, Jougla said that raising huge sums of money is not their primary goal.

"The goal is to make a political statement by divesting from fossil fuels that our university does not condone fueling climate change, essentially," she said. "The fund is also supposed to be symbolic in representing the support that alumni have, students have, parents have, in wanting to support Columbia but not wanting to support Columbia supporting the fossil fuel industry."