Locals push for carriage house landmarking, but owners nowhere to be found

Locals push for carriage house landmarking, but owners nowhere to be found 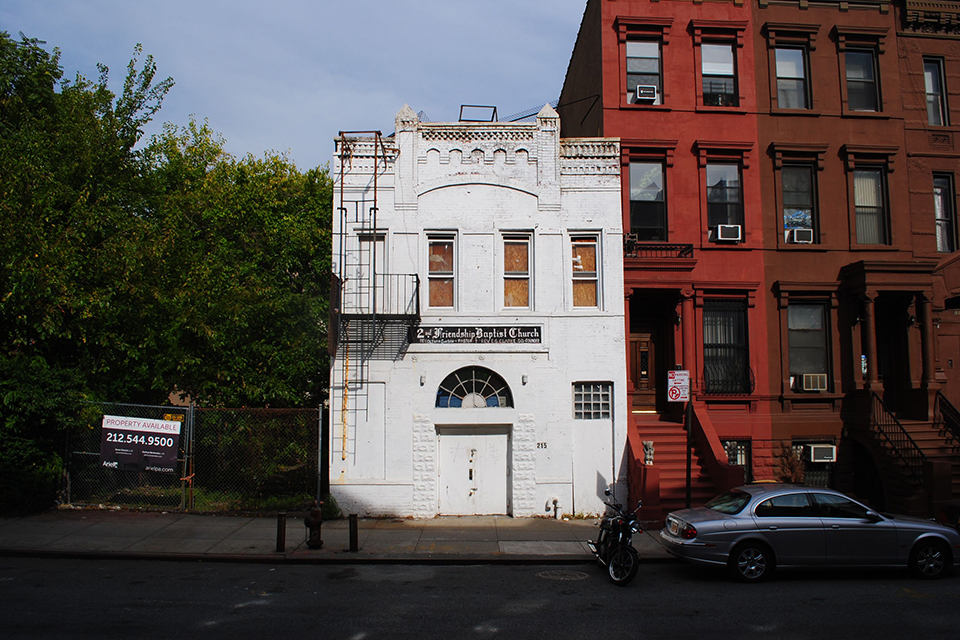 Locals want to landmark the 19th-century, Victorian-style carriage house, but no one is quite sure who owns the building.

But one big question hangs over the preservationists' efforts—who owns the building? After all, the church has sat empty for years, as its leaders have slowly passed away and a 2006 fire severely damaged the building.

"From what I've understood in the past, no one is exactly sure who owns this building," Cator Sparks, president of the 122nd Street Block Association, said. "Someone's uncle's brother owns it but could never get it sold—we're not really sure how it's going through the steps of being sold."

According to city records, the Second Friendship Baptist Church owns the building. But the organization's address is listed as a house in Edison, New Jersey. Calls to the New Jersey branch of Friendship Ministries, the successor to Second Friendship, were not returned.

The latest property record is of a $10,000 mortgage transferred by the church to a man named Raymond Staggers in 1992. Reverend Harry Bligen, who represented the church in the transaction, died in 1993, several records show.

Then there is a mysterious man—who block association member Cindy Worley said "seemed to be the one in charge of whatever is going on with the building."

Worley declined to give the name of the man.

According to Worley, the man had expressed interest in the building's preservation, attended some block meetings, and even repainted the façade after it was damaged in the 2006 fire.

However, when she asked him about the carriage house while he was standing in front of the building two weeks ago, he waved his hands and said, "It's done, it's done." When they went inside and she asked to see the church, he would not let her in.

Since then, he has stopped returning the block association's calls. As of now, no one knows who is in charge of the building.

"All we've asked is that the people of the church tell the developers to explain how important that façade is to us and the community and the neighborhood," Sparks said. "The carriage house is a rarity in Harlem these days, and to keep that façade—even if it becomes a five-story building—will still be beautiful."

"This is a wonderful building built in the 19th century as a private carriage house, and such buildings are imperatively rare throughout the city, but in Harlem are exceedingly rare—those that survive," Michael Henry Adams, author of "Harlem: Lost and Found," said. "You have the same sort of decorative elements as the Victorian houses in the neighborhood, and so it's definitely worthy of being preserved."

"I think that it's very important that that building and all these other buildings be protected before we have the same problem where a worthy landmark from the 19th century in the Victorian style is threatened with demolition for no good reason," Adams said. "That shouldn't be allowed to happen anyway in New York—that's why we have a landmarks law."

Landmarking, however, still requires cooperation from a building's owner. Until the owner of the church is found, whether the church can successfully be preserved is uncertain.

The block association filed its landmarking claim, according to Sparks, almost as a preemptive measure.

"From what I know, there is no status," Sparks said. "We hurriedly, as a neighborhood association, filled out the landmark forms to see if we could get it landmarked."

After Worley spoke to the man two weeks ago, she said she contacted the attorney general's office to see if any transactions had taken place regarding the building. A lawyer at the office told her no.

"As far as we're concerned, we would just like to see the façade saved and work with whoever is developing it or purchasing it," Worley said. "We would like to see the carriage house preserved. We feel like it is a significant piece of history."