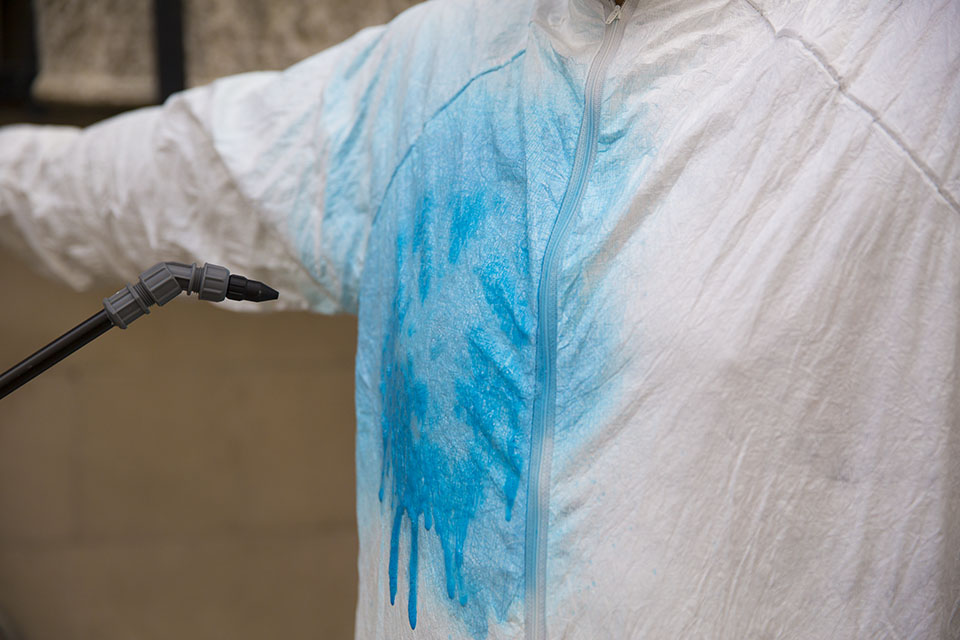 A colored bleach mist was one of the several solutions presented by participants of Columbia's Ebola design challenge.

After the University launched its first-ever design challenge at the beginning of the month, teams of students and faculty have come up with their first ideas to tackle problems linked to the Ebola epidemic in West Africa.

The proposed solutions to the challenge, a joint effort between the School of Engineering and Applied Science and the Mailman School of Public Health, range from a colored bleach mist to methods for decontaminating electronic equipment.

Earlier this month, teams presented their ideas to a panel of professors and experts in the field, who chose 11 out of 18 projects to move on in the challenge and receive funding for further research.

"All of the groups came up with very interesting designs, without exception," said engineering professor Jeffrey Kysar, who is part of this panel .

While the World Health Organization advises workers to bleach suits for 10 minutes in order to kill all viruses, "there's no way to guarantee now you've sprayed every single area with the current bleach mist," Kang said.

The warm climate of West Africa requires workers to change suits as often as every half hour, he said. Improperly applying bleach increases health workers' risk of contracting the virus—for every 20 patients, one doctor gets infected, he said.

"It's hard to visualize where you've sprayed, so why not just add color?" Kang said. "You can clearly see that it coats the entire surface, whereas if you just spray the bleach mist alone, it would just form droplets and run off."

Kang's team worked to find the right combination of surfactant, pigment, and bleach that would retain color while also sticking to the PPE suit, he said. The current design consists of a packet, which can be added directly to current bleach solutions used in the field. The cost? Four cents per packet.

Another group has designed new patterns for PPE suits, aiming to make them less intimidating for Ebola patients and locals.

"Given the general misinformation surrounding the disease and the way it's infiltrated these communities, it doesn't help that people are afraid of the health care workers that are coming to help them," Ramya Ahuja, SEAS '16, said.

Ahuja's group studied traditional West African cloths and patterns, and are now reaching out to textile companies in order to print these patterns on the aprons worn atop the PPE suits.

"It's a really small thing, but the way you're perceived makes a difference in what you're going to do," she said.

Eric Tong, SEAS '16, is part of a group that is working to design and build a chamber to decontaminate the electronics—cell phones and diagnostic equipment—used to identify and treat Ebola.

Currently, health workers on the ground must combine powder and water in ziplock bags, which often rupture and let out the toxic chlorine dioxide gas produced inside.

In order to make the decontamination process simpler and safer, Tong's group designed a fiberglass-reinforced plastic box which allows water to flow in through a valve and powder to enter through a drawer. Two of the box's walls will be translucent to allow sunlight to break down the gas, preventing it from contaminating the surrounding environment.

Although all members of Tong's group are SEAS students, he said that the interdisciplinary nature of the challenge was reflected in the makeup of his group.

"We tried to find people from every discipline to help us out for the design," Tong said. "For example, our material scientist friend was involved later as we needed her to do research."

Just as the groups bring together students with an array of academic interests, the overseeing panel also reflects a diversity of specializations needed to stop the spread of the virus, Kysar said.

In addition to public health, medicine, and engineering professors, the panel also includes Mark Scovill, one of the directors of Columbia's ROTC program, who worked on relief efforts after Hurricane Katrina and the 2010 earthquake in Haiti.

"That input and expertise and perspective is invaluable in this project, because they don't have to imagine what it's like to be in a zone like that in which people are really suffering," Kysar said. "They've actually seen it and helped people in that regard."

For Kang, it's this interdisciplinary nature, coupled with the real-life applications of the project, that makes the design challenge so valuable, he said.

"Especially with a large social impact and doing this for a good cause, it's that much more meaningful," Kang said. "If we had more things like this, we could do a lot of good for the world."