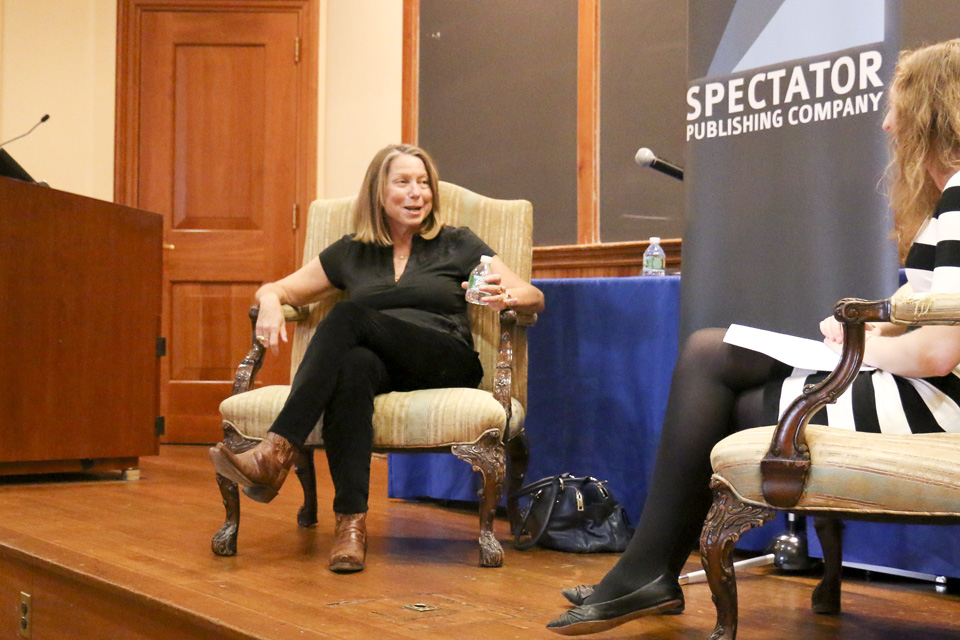 While Abramson didn't discuss the details of her departure from The Times, she gave some insights into her time as managing editor and executive editor.

"I still think the most noble title you can have is reporter, and I'll always feel that way," Abramson said. "Even with all the years I spent in editing jobs, I never stopped reporting—I always continued to write."

Abramson also talked about her editorial philosophy and penchant for long-form journalism. She said that at The Times, she aimed to have one investigative piece on the front page every day.

"My critics would say sometimes I pushed too hard for the story behind the story, but others found it galvanizing, even inspiring," said Abramson, whose tough approach in the newsroom was the subject of controversy after her firing.

Abramson said her own career trajectory coincided with big newsrooms wanting more women as top editors, but said that's not the reality in 2014.

"It's not the year of the woman right now, that's for sure."

She pointed to the sidelining of women like Katie Couric and Barbara Walters in broadcast journalism, and added that "the network lineup is mainly white guys right now."

Be it broadcast or any other form of journalism, "I just don't think that there are that many women running things, period," Abramson said.

When whistleblower Edward Snowden decided to leak classified information from the NSA, he initially reached out to journalist Glenn Greenwald at The Guardian, not the New York Times. When the stories began to come out and Abramson realized The Times had been scooped, "I was sick to my stomach," she said.

The Times eventually obtained the documents, which Abramson said she immediately placed in a safe in The Times legal department.

"Not everything has become public yet," she said. "How we would safeguard the material was important."

When asked how the Snowden leak has changed journalism, Abramson said that remains to be seen.

"We're still living through the after-Snowden part," she said.

She discussed the measures the U.S. government has taken to pursue whistleblowers, and was critical of the subsequent chilling effect on the dissemination of important information. "It's not journalists who lose, it's the public who will be denied information that's really critical to them," she said.

"Do any of us think we're worse off for knowing the scope of the eavesdropping material that Snowden revealed? I don't think so," Abramson said.

The discussion got closer to home when Abramson discussed covering sexual assault on college campuses. She acknowledged the difficulty of obtaining information through the administration, and said pursuing other routes is often more helpful.

"In terms of how you pierce the secrecy of the administration and the people who are handling these cases, it's difficult, but having studied a number of big investigative stories about this, it seems one way in is through the victims and sometimes the lawyers."

Abramson also warned journalists against falling into a "he said, she said" story when covering sexual assault on campuses.

The next [very] big thing

Abramson ended the discussion by revealing a few details about her new digital venture with journalist Steven Brill. The startup will feature a single story online each month, and stories will average a lengthy 20,000 words.

Abramson said she was a champion of long-form stories during her 11 years at The Times, and that "long form is both necessary and loved."

"We're going to have a lean staff, we are going to be involved with multimedia integration, not for everything. I'm not a believer that video or motion graphics are appropriate for every long story. They're great when they actually deepen the story and become an organic part of the reading experience," she said.

Journalists will be paid an advance of $100,000 for their stories—luckily, "A lot of investors are interested in us and what we're doing," Abramson said.

As for those who don't believe Abramson's startup model will find a receptive audience?