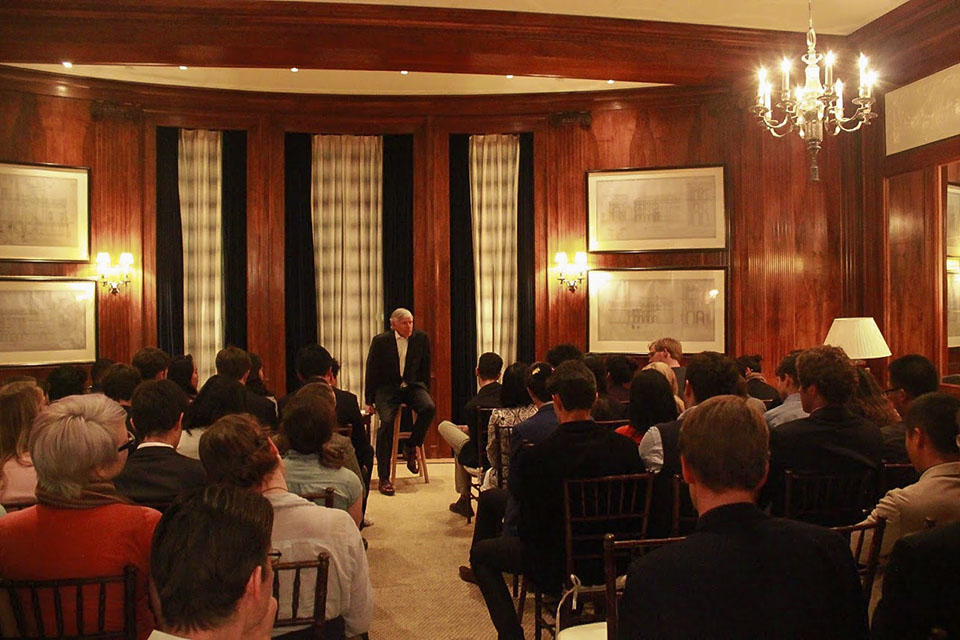 From sexual misconduct adjudication to community outreach in Manhattanville, here is what you need to know from Monday's Graduate Student Fireside Chat with University President Lee Bollinger.

In response to a student who asked about his opinions on the changes that student groups are proposing to the new gender-based misconduct policy, Bollinger discussed why he favored having a hearing panel and reiterated his trust in deans to make fair judgements.

"I have great confidence in them in the sense that they can sensitively and meaningfully make judgements about how the case should be reviewed, and I really do not believe that any judgement issues will be affected by concerns about the public reputation of Columbia, or fundraising, or donors, or any of those considerations," Bollinger said about having deans be in charge of the process.

Law professor and Special Advisor to the President on Sexual Assault Prevention and Response Suzanne Goldberg, who was also at the fireside chat, urged students to read the new gender-based misconduct policy.

"Our policy is a national model, both in terms of the way that it explains itself to students, as well as the clarity of resources available," she said. "We also have more resources than any other school in the country to assist people who have experienced some sort of sexual violence."

Still, some students didn't agree with Goldberg and Bollinger's remarks.

"A colleague of mine was specifically pressured by a dean to grant special extensions and favors to a student who had committed sexual assault, and it seems like having that much power is not a good thing," said Andrea Crow, GSAS.

"His answer to everything was, 'I trust the deans.' Are the deans under review? Does anyone else have jurisdiction over the deans' review process? Does anybody review their actions?" July Tran, second year at Public Health, who posed the initial question, said after the event. "It annoys me that the deans are handling it, because it's a student life issue."

"Mrs. Goldberg talked about all the ways we can email people, but I sent an email, and no one responds to me," she said. "It bothers me that they're talking about gender misconduct. Rape is a crime, it is not an issue of misconduct. In terms of deciding who's guilty, that's a legal criminal issue."

On community outreach and the Manhattanville expansion

A student asked about the Manhattanville expansion and the tension it created with local residents.

"I would not for a minute accept any criticism of the institution in not being responsive." Bollinger said. "I was here in 1968 when the Gym Crow controversy arose, and this was a searing experience for Columbia. The relationship of the community with Columbia was not repaired for two decades."

Bollinger cited the $130 million Community Benefits Agreement as one of the ways Columbia is benefitting and easing tensions in the community.

Bollinger also said that the Manhattanville campus will be accessible to locals.

"The plazas would be designed to be welcoming to people. There will be a diagnostic clinic in the Mind Brain Behavior building. The School of the Arts will have galleries and screenings open to the public. We're already working with a lot of institutions in Upper Harlem," he said.

Several students raised issues on the number of non-tenure-tracked adjunct positions, and the limited number of teaching positions for students in some subjects.

"The people who say, 'I feel really great about my field' are those that aren't planning to work in the University in the future," Crow said. "What do you think is the way of addressing a body of institutions where there's fewer and fewer secure job positions?"

"I think it's a difficult period for some areas within the academic world. But this is a systemic problem. This is not something one institution can solve, and we have to think about it that way," Bollinger said.