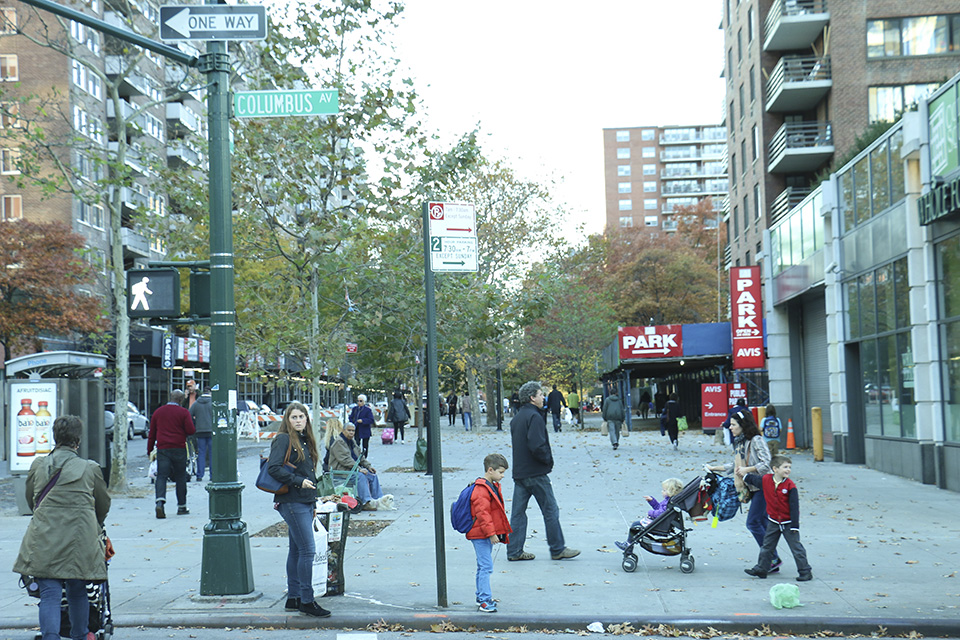 Friends of Stryker Park have proposed turning this wide sidewalk into a plaza, but the Park West Village Tenants' Association is concerned about increased pedestrian traffic.

A proposed new sidewalk plaza on West 97th Street has two neighborhood groups on the Upper West Side battling each other for public support.

Members of Friends of Stryker Park want to beautify an area of sidewalk between Amsterdam and Columbus avenues on the north side of West 97th Street, just west of P.S. 163.

But members of Park West Village Tenants' Association are concerned about increased pedestrian traffic a new plaza could bring—especially as part of the plaza includes an entrance to Park West Village.

A Nov. 11 DNAinfo article quoted members saying that the plaza could bring excessive crowds and chaos to the area, especially if the city approves the controversial Jewish Home Lifecare building proposed for the same street.

"Right now, the space is ugly, bleak, and it's all concrete," Bob Leonard, co-founder of Friends of Stryker Park and a resident of 97th Street, said. "It's kind of a no-man's-land. No one's really taken responsibility."

Friends of Stryker Park, formed in the summer of 2013, recently applied to be part of the Department of Transportation's NYC Plaza Program, which "works with selected not-for-profit organizations to create neighborhood plazas throughout the city to transform underused streets into vibrant, social public spaces," according to its website.

However, members of the tenants' association, who represent residents in the massive Park West Village affordable housing complex, think the space is vibrant enough already.

Tenants' Association President Maggi Peyton said that her focus is on stopping the new JHL building.

"It's turned out to be a great place for kids with skateboards, for mothers to pick up their kids," Peyton said. "We love it the way it is now. We are very much involved with trying to stop Jewish Home on 97th. It's going to be a complete nightmare for anyone who lives in Park West Village."

Jean Green Dorsey, a resident of the Stonehenge apartment building on the south side of West 97th Street, has been vocal about preventing Jewish Home Lifecare from coming to the block, but she sees the plaza proposal differently.

"I think it's a mistake for us to take the position that if JHL is coming, we can't have the plaza. You set yourself up to lose," Dorsey said. "If the plaza can be properly maintained, I think it could be great."

Leonard said that there are not yet specifics on how the plaza would look.

"I don't know what they don't like, because we're not doing anything," he said of opponents to the group. "We see a block that could be improved, but we don't have any specifics."

The Park West Village Tenants' Association has "been stepped on a lot in the past couple years, so I understand where people are concerned," Leonard said, referring to the JHL proposal and the 2006 construction of Columbus Village, now called Columbus Square, the commercial development between West 97th and West 100th streets that includes Whole Foods, TJ Maxx, and other retailers. "Some people oppose any change—anything that's really different."

Leonard said that District 7 City Council member Mark Levine is supportive of the plan for a plaza. Levine did not respond to a request for comment.

Community Board 7's transportation committee will discuss the plaza proposal at its December meeting, Co-chair Andrew Albert announced on Tuesday night. Friends for Stryker Park will also hold a community workshop in January, according to Leonard.

For Peyton, the plaza is an opportunity for improvement. She said that the group proposing the plaza presented to the tenants' association, but she was not satisfied with what they told her.

"The petition doesn't say anything. It says, 'Wouldn't you like a wonderful park plaza?'" Peyton said. "It was a lovely presentation, but it dealt mostly with plazas in Europe."