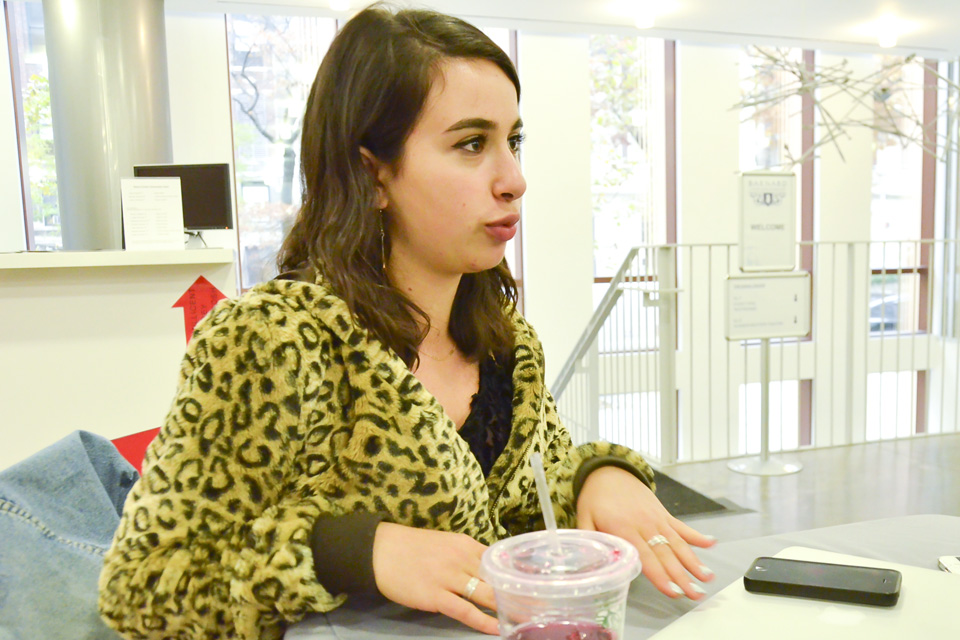 Michela Weihl, BC 17, is helping organize the Safer Bars initiative as the group's prevention program coordinator for No Red Tape.

No Red Tape Columbia is bringing the fight against sexual assault off campus and into local bars.

No Red Tape is launching a new initiative called the Safer Bars program to teach bystander intervention strategies to staff at Morningside Heights bars. No Red Tape partnered with nonprofit Collective Action for Safe Spaces, which has a similar program in bars across Washington, D.C.

"A lot of people, myself included, sort of take it as the norm—like when you go to a bar, you should expect some level of sleazy behavior and for some people that means maybe they don't go to bars as often. I definitely don't spend that much time in bars partly because of that," Michela Weihl, BC '17 and the prevention program coordinator for No Red Tape, said. "I think this is an exciting opportunity to sort of shift what that norm looks like."

CASS came to Columbia in October to train nine No Red Tape members, who are finalizing the curriculum that No Red Tape will offer to bar employees in two-hour training sessions starting in January.

Over the coming weeks, No Red Tape will be contacting local bars to discuss having them participate in the program, and the nine people trained by CASS will hold practice trainings for other interested students to get involved. No Red Tape is also soliciting stories from people who have experienced sexual assaults at bars to include in the trainings.

Raul Quines, general manager of The Heights Bar and Grill, expressed interest in the idea of having further training to respond to instances of sexual assault for his bar staff.

"Our bouncers have, as a part of their training, been taught ways of handling customers, but it's nothing very intensive," Quines said. "If you go to any bar or restaurant, there are issues with this."

Weihl said that participants will be asked to share stories about the different behaviors they've witnessed at their establishments. The training curriculum also includes a number of bystander intervention strategies, including distracting a potential perpetrator.

"Just by diverting the perpetrator's attention for a second, you can change the scene," Mirella Blum, BC '18 and one of the students trained last month, said. "Diverting their attention will either make them forget what path they were on or will give the future victim a chance to get away."

CASS has been teaching bystander intervention to bar staff in Washington D.C. under its Train the Trainers program since early 2013.

"The response [in D.C.] is really positive. I think that one of the most important things that the workshop does is open up a conversation in the bars and restaurants that we go to. It is something that people don't talk about enough," Zosia Sztykowski, CASS' director of community outreach, said. "No one really knows what their colleagues are doing to help keep people safe. We think that opening up these conversations is really valuable."

Quines, however, focused on the value of the program as a tool for violence prevention.

"I would like to see such things to educate establishments," Quines said. "The most important thing, beyond safety, is awareness that an initiative is in place empowering a bartender or bouncer in response to different human encounters."

For Mel's Burger Bar owner Steven Kay, however, sexual violence is something he worries more about after his customers leave the bar.

"Within the four years we've been here I've not experienced any problems—knock on wood. Any physical occurrences are usually all-men, and even that is rare," Kay said, referring to bar fights. "It's something we take very seriously. We like to think people are safe here."

"There have been times I have had bartenders make sure they [the customers] get home alright. I've even given cab fare to some to get home," he added.

For No Red Tape, the initiative is still more about creating a dialogue among bar staff about sexual violence in their establishments rather than just addressing individual incidents that call for intervention.

"It's hard to measure success because it's a lot easier to measure rates of reported violence than lack of. Just because reports drop doesn't mean instances of violence have necessarily dropped," Weihl said. "I think when we talk about bigger goals of changing our cultural conversation and changing understandings of what individual responsibility looks like, it can only help to have more people aware of this stuff."