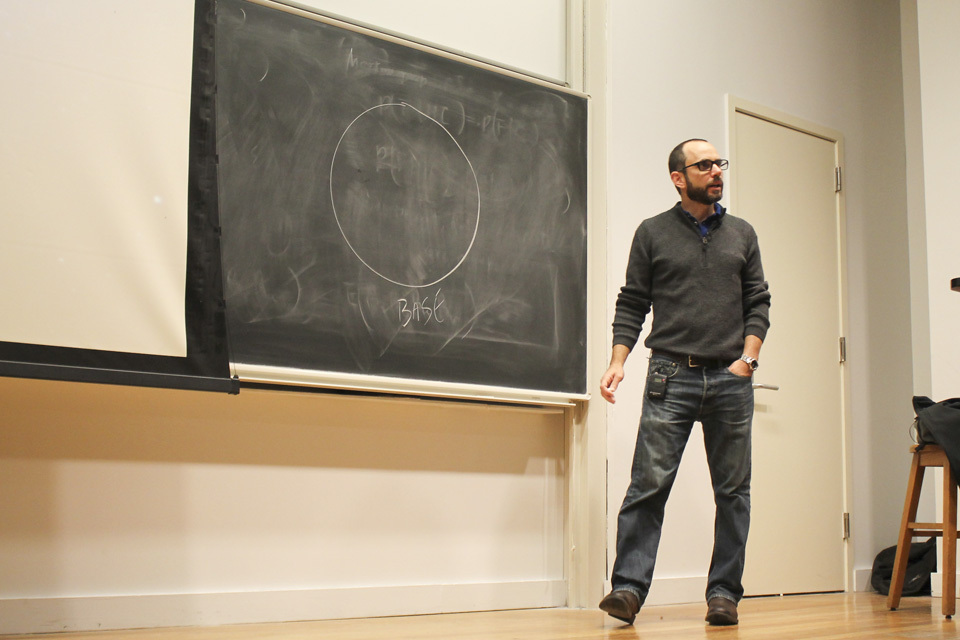 Students seeking to learn the basics of computer science in the context of the humanities, the social sciences, or economics will now have an opportunity to do just that.

Computing in Context, a new interdisciplinary course open to Columbia College and School of Engineering and Applied Science students to be offered for the first time in the spring semester, aims to teach students programming and computer science logic within the context of their prefered discipline: English, history, or economics.

Computer science department chair Julia Hirschberg and Adam Cannon, the associate chair for undergraduate education in the Department of Computer Science, developed the 150-person course in conjunction with the three professors who will teach each context track.

"What this course is meant to be is an introduction to computing for the liberal arts major. They'll walk away with something they can use in whatever their major might be," Cannon said in an interview on Friday. "To my knowledge, it's the first sort of serious effort at doing something like this."

The four-point course will be split between two weekly lectures and a discussion section. For the first half of the semester, Cannon will use the lectures to provide a comprehensive introduction to the programming language Python, while in section, English professor Dennis Tenen, history professor Matthew Jones, and financial engineering professor Karl Sigman will discuss applications of Python in their respective fields.

These discussion sections will continue into the second half of the semester, but as students become more comfortable with basic skills, Cannon will teach only one lecture per week, and Tenen, Jones, and Sigman will teach the other lecture to students in their respective tracks.

If all goes well, Cannon said he hopes the course structure will soon be emulated at other universities.

"The University is behind it—they understand that computing is a big deal right now, and this is an opportunity for Columbia to lead in this direction, computing for the liberal arts." he said. "We think if we do a good job we can see courses like this popping up all over the country."

Computing in Context—which will be cross listed as a computer science course, a history course, an English course, and an economics course—has received support from administrators, who, like Cannon, hope other institutions will follow Columbia's lead.

"The 'Computing in Context' course represents an exciting and innovative way to expose students to big ideas in computing," David Madigan, executive vice president and dean of the Faculty of Arts and Sciences, said in an email. "The SEAS and A&S faculty involved deserve great credit for devising an approach that I fully expect will become a national model."

"Computer Science and SEAS have been thrilled to see the sky-rocketing interest in students from across campus in taking computer science courses," SEAS Dean Mary Boyce said in an email.

"I'm really happy for students to have this new opportunity to explore their interests, study more about computer science, and learn about the power of programming in many academic fields," CC Dean James Valentini said in an email.

Hirschberg said that one of the issues Computing in Context hopes to address is how effectively computing tools and programming are used in the humanities.

"Sometimes you can use tools, but not really understand how they work," Hirschberg said.

Jones echoed that sentiment, saying that one of the purposes of Computing in Context is to give students "an understanding about where these tools are striking and where they are limited."

"I want to expand the audience in both ways," Tenen said of his role in Computing in Context. "I want to bring literary theory—what we do here in this department—to a wider audience. And the other way around, I want to expose literary theorists and humanists to a measure of technical literacy."

"They're going to be producing maps and network diagrams, within weeks," Jones added. "But those skills are going to be enduring."

Computing in Context can be compared to W1004, Introduction to Computer Science and Programming in Java, which was designed to be the introductory course for any student pursuing a major in Computer Science. It covers the syntax and conventions of the programming language Java as well as the diverse methods of algorithmic thinking that are central to understanding the logic of computer programming.

In the ten years since Cannon began teaching 1004, its enrollment has grown from below 100 to just shy of 400, which marks a consistent and dramatic upward trend in students' interest in learning computer science and programming. As 1004 grew, so did the diversity of the interests of its students. Ultimately, this diversity of interests helped to inspire the creation of Computing in Context.

Funding for the course has been entirely internal so far, and Cannon said he is applying for additional University funding now.

The costliest feature of the course—having four faculty members teach it—is intended to be a one-time expense, Cannon said. The plan is to streamline costs by employing a flipped classroom model in future semesters.

Tenen, Jones, and Siegman will all film their lectures in the spring. In future iterations of the course, Ph.D. candidates will replace the three professors, and the digitized lectures will be assigned as homework to students. Canon said he hopes this model will eventually allow for the addition of more context, and potentially collaborations with Columbia's other professional schools.

Despite the potential challenges that inevitably come with a new course, the faculty involved said they're excited to get started next semester.

"That's the experiment we're running and we'll see," Cannon said. "It could be a disaster. It could be awesome."

Correction: A previous version of this article stated that Cannon created W1004 in 2005. However, the course was created earlier by professor Al Aho, for whom Cannon took over in 2005. The article also stated that Computing in Context was designed for an enrollment of 300 people. It has actually been designed for a 150 people. Spectator regrets the errors.