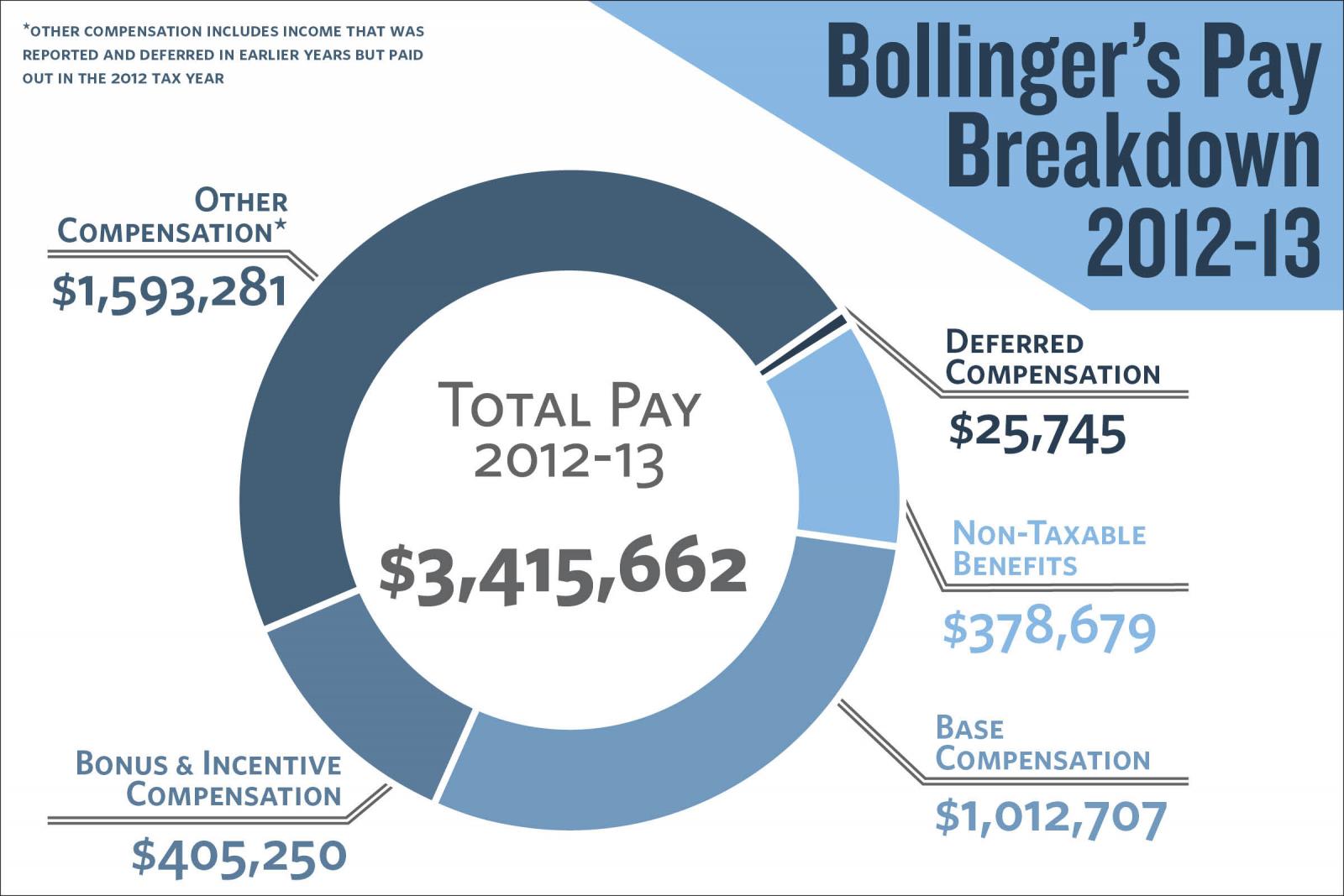 Columbia's trustees said they're "delighted" with University President Lee Bollinger's performance—and have rewarded him as such.

Bollinger received a total of $3.4 million in the 2012-13 school year, according to page 233 of the University's 2012 IRS Form 990, making him the highest paid Ivy League president that year.

While this seems to be a huge increase from Bollinger's $2.3 million compensation listed in the previous year's tax form, breaking down the specifics of his pay is much more complicated.

Nearly $1.6 million of Bollinger's $3.4 million—almost 50 percent—was previously earned income that was paid out in 2013 as part of a "contractually agreed-to schedule," according to Board of Trustees Chair Jonathan Schiller, CC '69. Another $350,000 was the value assigned to the use of the president's house—a benefit of the position.

Board of Trustees Chair Emeritus Bill Campbell, CC '62, said that Bollinger's total salary—which consists of a base salary, bonuses, and deferred compensation—is determined by a performance assessment based on anonymous feedback from deans, administrative staff, and trustees. This assessment is compiled and presented to the trustees every July, who then discuss with Bollinger how much he will be paid that year, Campbell said.

While some undergraduates have criticized Bollinger for what they call inaction on issues like sexual assault policy and divestment, Campbell said in a phone interview last Friday that the board was "delighted with the performance of our president and our staff."

Campbell declined to name specific factors the board considered during the assessment, but he said that they ranged from meeting performance goals to things like the Manhattanville construction timeline and networking with politicians and business officials.

"At the end of the year, we look at this, and we kind of rate him," Campbell said. "And over the years—a little up, a little down—by and large he's just performing phenomenally."

For this phenomenal performance, Bollinger has been paid well beyond his base salary.

In the 2012 tax year, Bollinger's $3.4 million total pay consisted of $1.01 million in base compensation, $405,250 in bonuses, $1.59 million in "other compensation," $25,745 in deferred compensation, and $378,679 in nontaxable benefits, which includes use of the president's house. According to supplemental information in the tax forms, "other compensation" that year was almost entirely money Bollinger earned in previous years that was paid out in 2012.

Campbell and Schiller said that determining Bollinger's salary with annual reviews helps keep the president accountable while rewarding him for good work.

"We do it here because it's highly productive, so that we get the best out of our president, and all of our trustees feel enormously enriched by the fact we can guide him towards outcomes that we feel are strategically important for our University," Campbell said.

"It's one thing to have a plan. It's another to effectively implement it," Schiller said, referring to Bollinger's long-term achievements, like the $6.1 billion capital campaign, the acceleration of Manhattanville construction, and Columbia's global initiatives.

Ensuring Bollinger was adequately compensated had always been the plan since he was hired in 2002, Campbell said.

"We wanted Lee to be benchmarked at the top. So our goal was for him to be comped at the top five ... if he, in fact, performed," Campbell said. "I don't blush at all on Lee's comp."

Campbell and Schiller reiterated that Bollinger's $3.4 million is largely money he earned in previous years. And Bollinger is hardly an outlier when it comes to receiving large sums of deferred compensation.

Shirley Ann Jackson, who has been president of the Rensselaer Polytechnic Institute since 1999, has accrued $5.8 million in deferred compensation since 2002, according to a July Times-Union article. E. Gordon Gee, who was president of Ohio State University from 2007 to 2013, earned more than $6 million in his last year, a Chronicle of Higher Education article said in May.

Schiller also said that, compared with other university presidents, Bollinger's $1 million base compensation is "well within his peer group within the United States." In 2012, the base salaries of both Yale President Richard Levin and University of Pennsylvania President Amy Gutmann—the second-highest-paid president in the Ivy League—were around $1.1 million, according to their universities' IRS forms.

The deferred compensation serves another purpose: ensuring Bollinger remains at Columbia for the full term of his contract, which was extended to 2018 in August.

"One of the reasons for deferred compensation is not just for the guy, but also retention for the individual," Paul Dorf, a compensation consultant at the New Jersey-based firm Compensation Resources, said. "If they leave, they lose it."

Campbell and Schiller also pointed out the need for high pay to attract and keep top talent at universities.

"The drive to get a great president is really, really competitive," Campbell said. "It's almost shocking to me that the standards—the financial rewards standards—aren't even higher."

Even taking into account all $3.4 million that Bollinger received for the 2012-13 school year, he is still not the highest paid Columbia employee. Counting base compensation, bonuses, other compensation, deferred compensation, and nontaxable benefits, that title goes to Columbia Investment Management Company President Nirmal Narvekar, who received $5.6 million in 2012-13. Narvekar oversaw an 11.5 percent return on Columbia's endowment in 2013 and a 17.5 percent return in 2014.

Schiller said that ultimately, Bollinger's contributions to the University more than justified his pay.