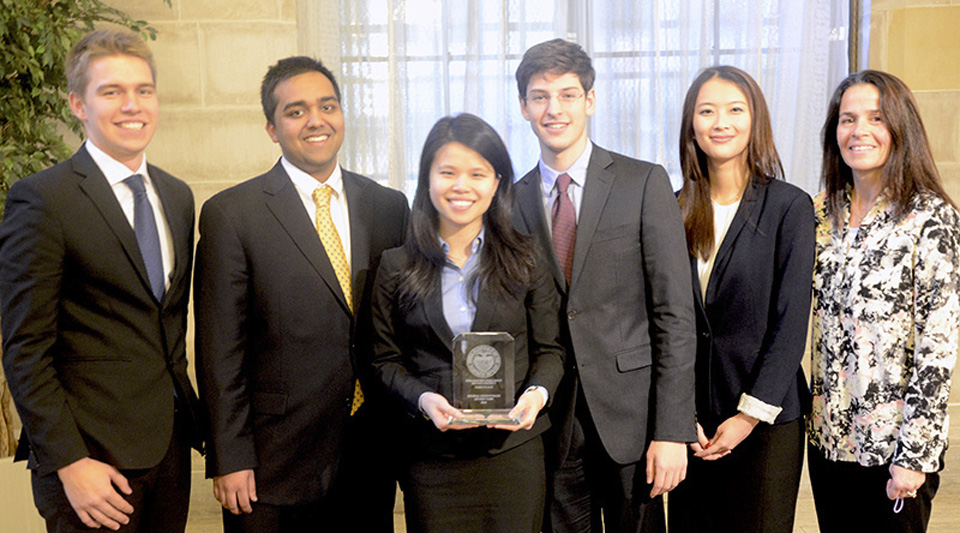 The Columbia Fed Challenge team's investments paid off this weekend with the team coming in third in the Federal Reserve Bank of New York's annual economic challenge—the first time Columbia has made it to the finals in a district competition.

The College Fed Challenge asks students to address current financial and economic situations, predict potential changes that can affect the economy, and propose policies in response to these changes.

Out of the 36 teams participating, three teams including Columbia made it to the finals. The competition consisted of two parts: a presentation and a question-and-answer session with judges from the Federal Reserve Bank of New York.

"We're looking at how they [the Federal Reserve Bank of New York] look at the economy and relying on their resources. Whether we come to the same conclusion we'll see," said Sally Davidson, a Columbia economics professor and the faculty adviser for the group.

This is Davidson's fifth year as a faculty adviser. Along with Davidson and the team coach, Skanda Amarnath, CC '13, other economics professors helped the team prepare.

The participants are all part of a one-credit class called Fed Challenge Workshop, which is designed to prepare students for the challenge. The five students that participate in the competition meet every Wednesday from 6:10 p.m. to 8 p.m.

"I think it's fair to say for all of us that we put more time into that one credit pass-fail class—because that's really not what it's about—than our three-credit or four-credit classes," Rafael Schwalb, CC '17, said.

The team began meeting on weekends in October to prepare for the the first round of the competition on Oct. 31 and the semifinals and finals on Nov. 14.

"This year what was different than in the past was the Fed compressed the time frame, so we chose the team sooner and sped up the process of getting ready," Davidson said.

Team members said that they saw this competition as an opportunity to gain real life experience, which they said was valuable as they consider careers in economics.

"When you take a macro class here you get a lot of theory and you technically learn about monetary policy—which you do—but having a different perspective on what the Fed deals with every day was really rewarding for me," Raghav Bansal, CC '17, said.

"Right now is a very interesting time for the Fed Challenge in particular—you know we had the financial crisis—these past couple of years have been an exciting time to be part of the Fed Challenge," Jiawen Tang, CC '15, said, "It's cool to be able to participate for multiple years and seeing how Fed policy is changing based on the conditions."

Of the five-person team consisting of Schwalb, Bansal, Tang, Christina Zhang, CC '15, and Matt Bruck, CC '16, three members plan on returning next year, leaving two empty spaces for new members to apply. The team hopes that with the successful members from this year returning, next year's team will have a stronger start.

"After getting third this year, of course we want to make the next step, and you have a mass of a lot of knowledge, so you start on a different level next year," Schwalb said.

To gauge interest in next year's challenge and also spark a financial discussion, the economics department is planning on hosting a periodic monetary seminar series with faculty and guests to talk about Fed policy.

"This is a really exciting time to be looking at monetary policy because it is a time of change," Davidson said. "We'll be trying out a lot of new things as interest rates hopefully normalize."