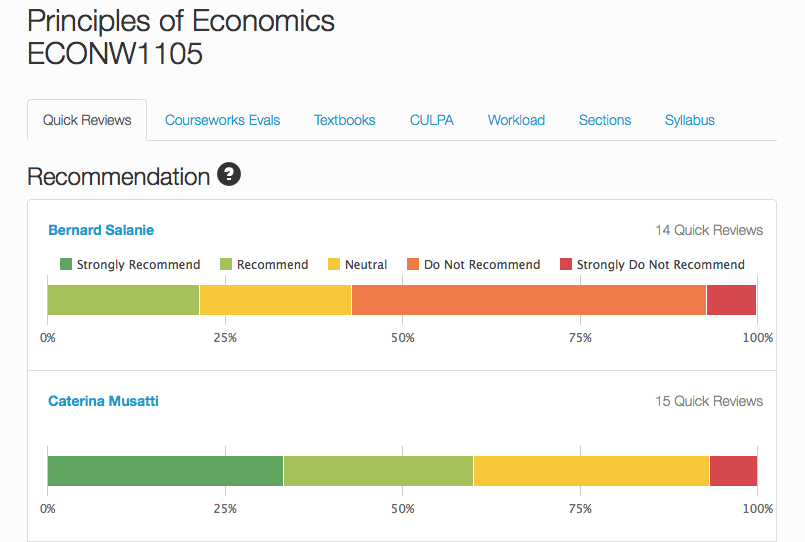 Course evaluation data for economics courses, including economics professor Sunil Gulati's Principle of Economics course are now available on Courses@CU. This is an example of one of the site's own Quick Reviews.

Nearly two and a half years after the University's Senate's resolution to open course evaluations, evaluations for the economics department and School of Engineering and Applied Sciences are now available on Courses@CU, along with a new review system on the site itself.

While SEAS course evaluations have been publicly available on Oracle since 2004, the release of evaluation data is left to the discretion of individual departments, and so far only the economics department has chosen to release evaluations publicly.

The evaluations are available on Courses@CU, a website owned by the Spectator Publishing Company, the parent company of the Columbia Daily Spectator. Courses@CU, which publicly launched as a website with course information, CULPA reviews, and a scheduling feature, has now added several new features—including its own review system called Quick Reviews, course syllabi, and major requirement tracking—in addition to university course evaluations.

While the Courses@CU team was working to implement its new features, it sought feedback from University Registrar Barry Kane and the Center for Student Advising.

"As an institution, we do not critique or endorse products, but the Office of the University Registrar was glad to advise on available web resources to enable the Spectator business office to develop Courses@CU," the University said in a statement.

A University statement said that the Arts and Sciences' Education Policy and Planning Committee has formed a subcommittee to evaluate the student evaluation process in A&S and that its recommendations—which could potentially include releasing course evaluations more publicly—will be announced later this academic year.

This is not the first time SPC has tried to get departments to submit their evaluations to Courses@CU—the company also asked professors unsuccessfully in November 2013. Spectator Publishing Company President Michael Ouimette, CC '16, said he hopes that Courses@CU creating its own review system prompts the release of more University data.

"This is a very political issue. Most departments aren't actually aware that they are allowed to release the data, so most departments just said, 'You gotta talk to central administration about this,'" Ouimette, the creator of Courses@CU, said. "There's just so little communication about evaluations."

Susan Elmes, director of undergraduate studies in the economics department, said the University Registrar is working to create a platform that would have similar functionality to Courses@CU, but would not include course syllabi.

She added that she believes public evaluations beyond the anecdotal information provided by CULPA are beneficial to both students and faculty.

"Adding the data from the official course evaluations will not replace these anecdotal sources, but will give students a more complete and recent assessment of the course," Elmes said in an email to Spectator. "I believe other departments will eventually release course evaluations for at least some of their courses/instructors."

The University Senate passed a resolution in April of 2012, calling on academic departments to send students the results of the course evaluations at the end of every semester. Although the economics department complied, faculty in other departments were divided over opening the evaluations, fearing that doing so would negatively impact their teaching techniques.

Since then, the economics department data has been available on Courseworks, but faculty have complained the system used to upload reviews is difficult to use. Columbia University Information Technology announced efforts in April to create an easier platform that professors could use to release data.

But some faculty still are not in favor of opening course evaluations.

Elisabeth Ladenson, the chair of the French and romance philology department, said that she thinks public course evaluations would make it easier for faculty to cater to student demands.

"I think that the constant evaluation, whether made public or not, is not necessarily in the best interest as it encourages faculty to play to student demands in a way that doesn't necessarily enhance educational value," Ladenson said.

Unofficial evaluations by students have been available on CULPA, and will now also be available in another form via the Quick Review feature on Courses@CU, which consists of multiple choice questions. CULPA, which was started in 1997, has over 24,000 reviews, while Courses@CU, which began accepting reviews last week, has around 1,100.

Still, some students said they felt the unofficial reviews on CULPA were too polarized to be informative.

"The reason you would post on CULPA in the first place is so that you love the class or if you hate the class. So I take that into consideration," Heejo Kang, CC '18, said.

Hebah Akram Khan, BC '17 noted that it's challenging to motivate students to submit reviews.

"Sometimes, students don't have a community approach to these things, and it's kind of self-centered," Khan said. "You have institutional knowledge—how can you contribute that to the rest of your community and actually foster an academic community where people care about what they're learning?"

Still, some students find some of Courses@CU's features difficult to use.

"I tried to use Courses@CU first semester when I was scheduling, but I got really confused and I'm not using it again this semester," Mira Davis, CC '18, said.

But other students interviewed said that Courses has been helpful for them to find classes.

"I really often, like, hesitate between a few classes and what helps me decide is the review from the professor, so it definitely has been instrumental for me, and especially when they're the same calc classes, for example, it's really easy to differentiate the class depending on the professor," Marina Fortunheo, BC '18, said.