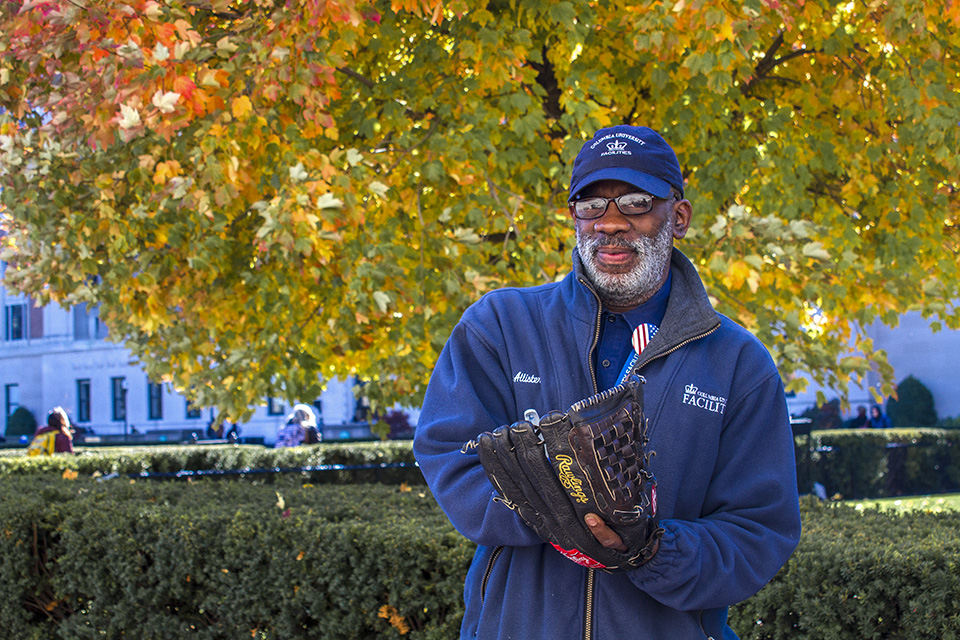 Kevin McAllister, a longtime electrician at Columbia, is also the founder of the Uptown Inner City Baseball League.

To Kelvin McAllister, baseball isn't just a game. It's how he gives back to his neighborhood.

McAllister, who has worked as an electrician at Columbia for 27 years, is the founder of the Uptown Inner City Baseball League, a youth sports organization based out of a school playground on Amsterdam Avenue and 134th Street.

The league is how McAllister connects his work and his community—he's a lifelong resident of West Harlem, where Columbia is building its new Manhattanvile campus.

"Harlem has been good to me," McAllister said. "We've got a lot of great people living in this community."

Today, the organization has two baseball teams—the New York Angels, for kids age 12 and under, and the Lil' Tigers, for beginners between 3 and 7 years old. Around 400 kids are involved in the league's baseball, basketball, softball, and other sports programs. The organization has come a long way from its beginnings in the 1980s.

Back then, McAllister saw local community centers closing and kids with nowhere to go during their free time. A softball player in his youth, the electrician decided to start a youth baseball league in Harlem. Needing money for his project, McAllister hit the streets.

"I would just roam up and down Amsterdam Avenue and Broadway," he said. "I would go in every store in the neighborhood and present them a proposal, and talk about what we are trying to do. It started out with a quarter here, a nickel there."

McAllister soon came to see Columbia's presence in the neighborhood as an opportunity.

"I looked at Columbia University and said, 'This is a very prestigious school, it's on the top of the hill, sitting right in central West Harlem,' and I said, 'I think they have a responsibility to give back to the kids and the community,'" he said. "So I started talking to people in the athletics department."

"This relationship I've built with Columbia University is priceless," McAllister said. "Because I know there are good people here who want to help, but you just have to knock on the door."

The relationship has continued over the last three decades—though now, the league has its own equipment and practices on the P.S. 161 fields. This spring, the New York Angels will be practicing on Baker Field.

In 1995, McAllister changed the organization's name to Uptown Inner City Baseball League after gaining tax-exempt status. Looking to expand, he started the Angels travel team and applied to join the Little League.

"We weren't fulfilling that child's full potential by just playing 10 blocks away, or in the Bronx, or in Queens," he said. "We had to get these kids out of their comfort zones."

To help make his goal a reality, McAllister once again looked to his employer—this time, to its community outreach wing, Columbia Community Service, which gives the league around $5,000 a year.

"That grant goes a long way," McAllister said. "We'll take the $5,000 and stretch it all the way to Mississippi."

McAllister's dream goes beyond the baseball diamond. Players are required to maintain a high level of academic performance and show their grade reports to the coaching staff. He hopes to eventually start an academic center, possibly using space in the School of International and Public Affairs or the Journalism School, where he often works.

McAllister's own sons, Kelvin Jr., 26, and Kerry, 21, both played baseball in college and are now members of McAllister's coaching staff. His wife, Stephanie, is a social worker. The two were childhood sweethearts and have never left the neighborhood.

"We grew up together in the Manhattanville Houses," McAllister said. "I lived on the ground floor with my big family, and she lived up on the top floor. And we just fell in love."

When the NYPD raided the Grant and Manhattanville houses and arrested over 40 suspected gang members this June, McAllister was troubled.

"Those raids—they could've done something differently," McAllister said. "Programs are scarce for these kids to tap into their potential. Unemployment rates are going through the roof. No jobs are available. Nobody wants to give these kids opportunities."

The raids, along with Columbia's Manhattanville expansion, are signs that his old neighborhood is changing. Although he appreciates Columbia's help over the years, McAllister remains concerned about the future of his home turf.

"This transition of Columbia moving in to Manhattanville—people want to embrace it. But there's such a history in the way the University comes in, and is a bully, and pushes people around," he said. "The land just begins to cost so much more. Everything is so much more."

"There are good things, too. Potential for employment, potential for the community to become safer, for it to become more diverse," McAllister added. "That's important. We live in a sardine can. We are all here together, and if we are going to really survive, we need each other."