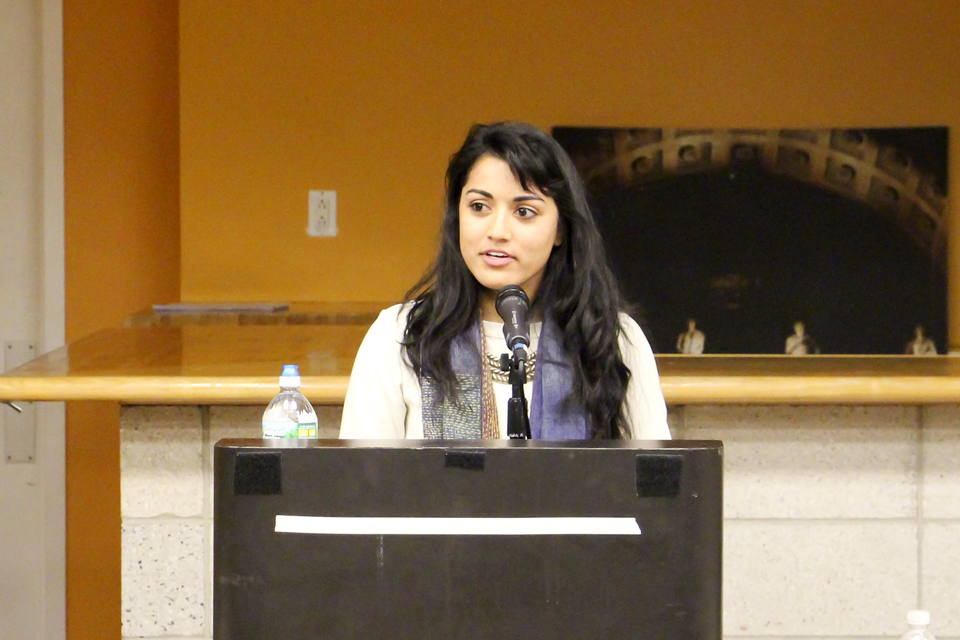 Ayushi Roy, CC 14 and board member of CCYA, said that the small turnout at Saturday's forum showed the importance of engaging more alumni in issues of sexual assault on campus.

A panel discussion on Saturday afternoon hosted by the Columbia College Young Alumni on engaging alumni in the current campus discussion on sexual assault was only attended by around 10 alumni.

The Young Alumni Forum on Sexual Assault featured as panelists Suzanne Goldberg, special adviser to University President Lee Bollinger on sexual assault and prevention; Christina Brandt-Young, a senior staff attorney from Legal Momentum, a legal advocacy organization dedicated to women's rights; Michela Weihl, BC '17 and a member of No Red Tape Columbia; and Marybeth Seitz-Brown, CC '14 and an organizer with Columbia Alumni Allied Against Sexual Assault.

"As we can see, we're clearly a very small group of people. I think this really echoes along the lack of engagement and the feeling that this conversation has been happening again and again, but isn't really growing," Ayushi Roy, CC '14 an organizer with Columbia Alumni Allied Against Sexual Assault and a board member of CCYA, said during the forum.

Still, some alumni have made steps to get involved in the issue on Columbia's campus. In May, Columbia Alumni Allied Against Sexual Assault worked with students to develop a set of proposals to submit to administrators on how to change the University's sexual assault policies. Earlier this month, alumni helped launch the Fund for a Safer Columbia, which aims to sustain the movement against sexual violence on campus.

"The goal here is cultural change. Just because you've graduated doesn't mean you jumped into a world where these issues are not a problem," Weihl said. "Keep talking, both in the context of school and in the context of the world we live in, which is currently way too riddled with rape culture."

Goldberg said during the forum that she has created a working group of students, faculty, and experts on sexual violence "to develop meaningful engagement" across all levels of the University. She added that the University is also planning to unveil a training program in the spring semester, which she first addressed in a piece in the New Republic.

Goldberg, who was first to speak, had to leave the event immediately after she spoke because she was sick, so she was unable to take any questions and couldn't further engage in discussion with the alumni.

Seitz-Brown said that these changes to the office were only "cosmetic changes" and criticized many of Goldberg's points.

"The problems are the same, but the names change," Seitz-Brown said. "It's now shorter, but I don't know how much the office has changed besides dropping a few letters. Linguistics changes can't cover up the fact that there actually aren't programmatic changes happening."

Seitz-Brown also raised concerns about the appeals process for sexual assault cases, citing concerns from students about the dean of each undergraduate school making the final decision in each case.

"Nobody has suggested an alternative that seems to be better than the deans who are responsible for their school handling appeals," Goldberg said.

In response, Seitz-Brown said that the responsibility of creating an alternative to the policy falls heavily onto the students. She said that this is "essentially creating a task force of unpaid labor who are forced to do research on their own time in addition to being full-time students."

"It's [the administration's] job to come up with these alternatives, and they've had many, many, many opportunities to do so," Seitz-Brown said. "It's a little confusing because you do have this institution that has so much money, so much access to research, organizers, community groups, and somehow we're still looking for people to give us suggestions."

Seitz-Brown said the misconception that fewer reported incidents of rape on campus meant less rape on campus is problematic when discussing the issue.

"This is a widespread belief that older alumni who donate money to the school subscribe to, and it's not true," Seitz-Brown said. "There is an incentive for people who are fundraising to make sure that the numbers are smaller."

During the forum, panelists also discussed issues regarding how federal laws hold the University accountable for its handling of sexual assault.

While the Clery Act requires schools to send out timely warnings to all students when someone on campus presents an ongoing threat to the community, Columbia currently only sends out warnings of sexual assault when the perpetrator is not an affiliate of the University, according to Weihl.

Weihl said that she felt Columbia's logic against sending out alerts for reports of sexual assault contradicted statistics regarding sexual assault.

"The response we got was that if the identity of perpetrator is known to the school and the survivor, then they do not present an ongoing threat because the school can take action to mitigate potential harm," Weihl said. "Given the statistics of serial reporters and the number of people who know their assailants, this logic does not make sense."

Goldberg also said that she didn't believe hearing panels should know whether a student has been accused of multiple instances of sexual assault.

"To have as part of the decision-making process information that is not directly relevant to an individual's accusation of another student risks denying the student who's accused of a meaningful opportunity to be heard," she said.

Although attendees at the forum had different opinions in regard to the administration's performance on this issue, many recognized the potential for the community to work together.

"I think it's an incredibly complicated issue in that no place is doing a perfect job. I don't think that they're doing a great job based on what I've heard from survivors. I think there's a lot of potential in making it work in a way that's respectful to survivors," attendee Kaley Hanenkrat, BC '11, said. "I think there's a lot of really ambitious students and alumni who are trying to make that happen."