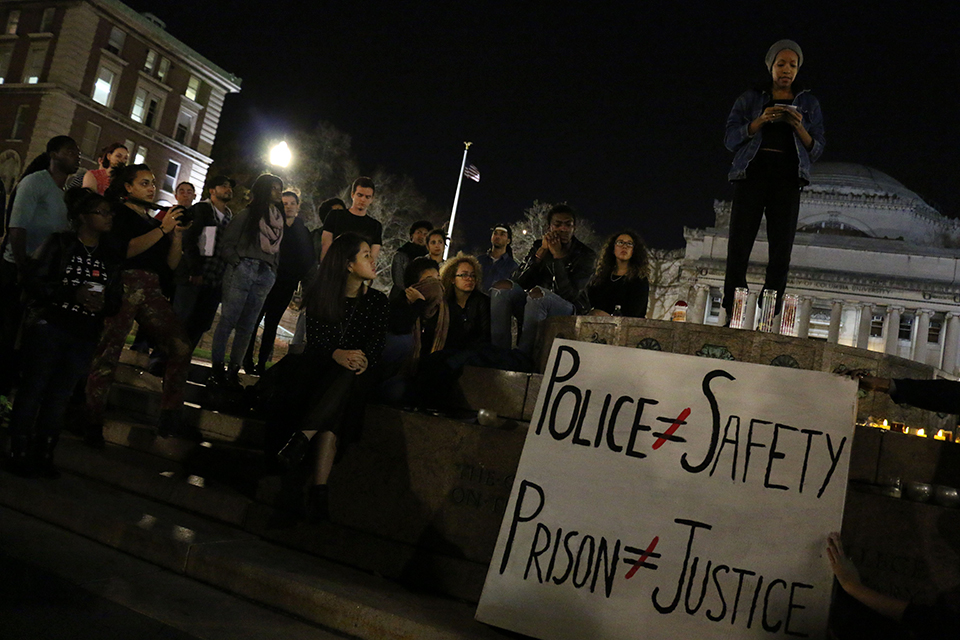 A student speaks at a rally held Monday night following the announcement in Ferguson, Missouri, that police officer Darren Wilson will not be charged with a crime.

Around 200 students gathered on the Sundial on Monday night following the announcement in Ferguson, Missouri, that a grand jury decided police officer Darren Wilson will not be charged in the death of Michael Brown.

The gathering was one of many that erupted across New York City on Monday night, though it was smaller and quieter than the ones that eventually occupied the Brooklyn, Manhattan, and Robert F. Kennedy bridges.

The two-hour gathering began as a rally, and evolved into more of a vigil as organizers lit candles and shared poems, articles, and songs before opening the event to attendees and allowing them to share stories.

Students expressed sadness, fear, and frustration—some tearing up or shaking—and many voiced concern for the safety of black people in the face of police brutality.

"Upon hearing that there will be no indictment, I am filled with sadness and anger. ... And I can tell that you feel the same way. I'm looking at your faces," Damon Xavier, CC '17 and political chair of the Black Students Organization, said. "Don't let this be the last time you think about police brutality."

Xavier spoke at the stream of people who walked past the gathering on College Walk.

Other attendees shared Xavier's frustration with the lack of community attention.

"You see people walking by, not giving a single fuck about what's happening, and this is where we go to school," Maya Reid, CC '15, said.

Between speakers, the crowd chanted slogans such as, "From Ferguson to NYC, the cops are racist can't you see. From Palestine to Chicago, the police state has got to go."

One speaker, Andre Fuqua, SEAS '15, grew up in Missouri and spoke about the racism in the community there.

Chloe "Kidd" Matthews, CC '18, read a list of black men who were killed by police.

Still, students' speeches and attendees had a tinge of hope for the future.

Some said that the national response to the Ferguson announcement was an indication that people cared.

Correction, Nov. 27, 2014: A previous version of this article misspelled the name of Tamir Rice. Additionally, the article used the term "African-American" when speakers at the Monday night's event mostly used the word "black," which encompasses more people than does African-American. Spectator regrets the errors.