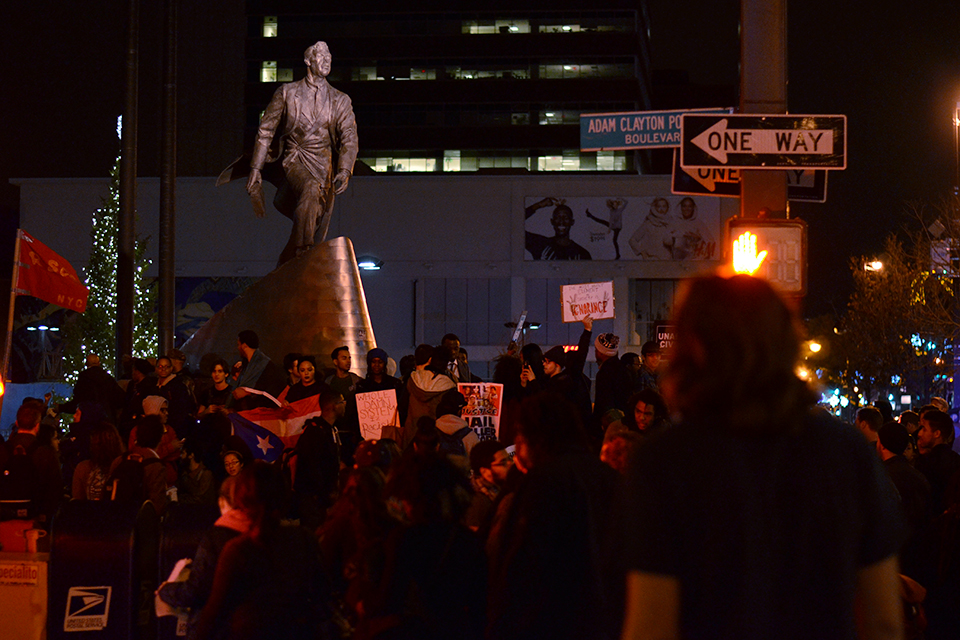 Dozens of Columbia students were among the thousands of protesters who marched across New York City on Tuesday evening—closing roads, tunnels, and highways—to protest the Ferguson, Missouri, grand jury's decision not to indict police officer Darren Wilson in the death of teenager Michael Brown.

Columbia Prison Divest, the Black Students' Organization, and the International Socialist Organization gathered more than 30 students to head down to Union Square, where the protests started in the late afternoon.

"What brings me out tonight is I'm a young black male in America and I'm in the same spot as Mike Brown, Eric Garner," Damon Xavier, CC '17, said referring to the August death of 43-year-old Garner after being placed in a chokehold by a New York Police Department officer. "If I was in any of those men's places, I would not be around. I would be in the cemetery."

The largest crowds were concentrated near Union Square and Times Square, where according to CBS News police arrested 10 people after protesters blocked traffic. Smaller protests partially shut down Franklin D. Roosevelt Drive and the Queens Midtown Tunnel and caused traffic delays in the Lincoln Tunnel.

The Columbia students were in a group of 300 people that marched across Manhattan—from Union Square to FDR Drive, Times Square, and Columbus Circle before marching uptown along—and closing traffic on—the Henry Hudson Parkway.

As the protesters, surrounded by a convoy of police cars and officers, turned onto 125th Street around midnight chanting "no justice, no peace," they were joined by several more interested Columbia students.

“We're here today to show that black bodies do have value, and there are a shit ton of black people here.” —Jami Harmond, BC '17

Members of the crowd—carrying signs like "Racism kills" and "Black lives matter"—said that they wanted to send a message to the country about racism and police brutality.

"Black bodies have no value in America," Jami Harmond, BC '17, said. "We're here today to show that black bodies do have value, and there are a shit ton of black people here."

"Black anger is not legitimized," Darializa Avila-Chevalier, CC '16, said. "You hear people telling us to calm down and not riot and all these things. Like, how many white riots, like, start over pumpkins?"

Many of Tuesday night's protesters had been out on the previous  night immediately after the Ferguson grand jury's decision was announced.

While Columbia students like Xavier were participating in a rally on campus Monday night, Pardilla said he and a group of friends led protesters across the Brooklyn Bridge. During Tuesday's protests, Pardilla listed names of black men who had been killed by police in recent years.

"Most of them were killed by the NYPD. We wanted to draw a connection," Pardilla said. "It's only our duty to show we're trying to make our voices heard."

Chelsea resident and actor Anthony Zayas, 37, was part of the group that occupied the Brooklyn Bridge on Monday. On Tuesday, he was part of a confrontation with police in Times Square that led to numerous arrests.

"I'm just really passionate about it, that's it," he said. "Things have to change big time with the police."

As they marched across the city, protesters watched out for one another, passing around bottles of water and making sure the group didn't leave anyone behind.

One of those leading the crowd was Rajib Miah, a student at the Brooklyn Manhattan Community College, who held a red flag representing the City University of New York's  Revolutionary Student Coordinating Committee—which describes itself as an organization "uniting revolutionary minded youth."

Protesters directed their chants at the police and justice system, shouting "Hands up, don't shoot" and "Brick by brick, wall by wall, we will make the system fall."

"We took the highway for Mike Brown, to Harlem for Mike Brown and everyone else who suffered from the corrupt system," Bronx resident Alexis Yaport, 18, said. "It was definitely one of the most beautiful feelings I've ever had."

Eventually, the group arrived at the Adam Clayton Powell Jr. State Office Building on 125th Street in Harlem, gathering around the glimmering statue of the famous African-American Congressman.

Protesters had mixed feelings about the NYPD's response to rallies in the city. Despite widespread protests, only 12 people have been arrested in New York over the past two days, according to police.

"I find it really interesting that they're kind of hands-off," Pardilla said. "It's telling how powerful our community is."

"I feel like in a way the police are mocking us," Tiano Johnson, a student at St. John's University, said. "I saw a lot of them smiling because they know that if we get violent, they have the right to get violent with us."

In contrast to the orderly rows of police officers and vehicles leading and trailing the crowds, protesters marvelled at how spontaneous the rallies were.

"I've gone to a couple of other marches—nothing like this," Kareem Campbell, Hunter College '18, said. "There's no centralized leadership—there's no one to be held accountable. We're fucking parading down a highway. Today's been absolutely exhilarating."

After the main group of protesters dispersed around 1:30 a.m., a smaller group of people led by LGBTQ activist Jennifer Louise Lopez walked over to the ATLAH World Missionary Church at West 123rd Street and Lenox Avenue.

Lopez, who drew media attention earlier this year when she knocked on the door of the church—which displays homophobic messages on its welcome sign—and asked to be stoned because she was a lesbian, said she hopes to extend the local Ferguson protests to the ATLAH church.

"I would love to see if we can take a group of people and bring them down and stop at the church—let the neighborhood know and that they have to wake up and do something," Lopez said.

"There's a common link between Ferguson and all these different struggles—it's hatred," said Antonio Vazquez, who lives in East Harlem and was at the Ferguson protest earlier in the night. "I been around a few places, you know, and wherever you go, there's evil."

Earlier on Tuesday, a group of about 10 students shared thoughts on the events in Ferguson in a Lerner Hall event organized by Undergraduate Student Life—and held at the same time as when the Union Square protests started.

In addition to talking about the situation, attendees made posters from colored paper and pipe cleaners with headings like "#blacklivesmatter" and "How are you feeling?" Milk and cookies were served, and a representative from Counselling and Psychological Services was present.

"Sometimes with these issues, people are left isolated with their emotions, and that's not always a positive thing for individuals," Director of Intercultural and Social Justice Programming Marta Esquilin said.

But for some students, the protests provided a better opportunity to discuss issues not adequately addressed on Columbia's campus.

"Black clubs shouldn't be the only ones talking about this," Harmond said at the rally. "Being black at Columbia—it honestly sometimes feels like it's just you."

Correction: A previous version of this article misspelled Eric Garner's name and omitted the apostrophe from the name of the Black Students' Organization. Spectator regrets the errors.