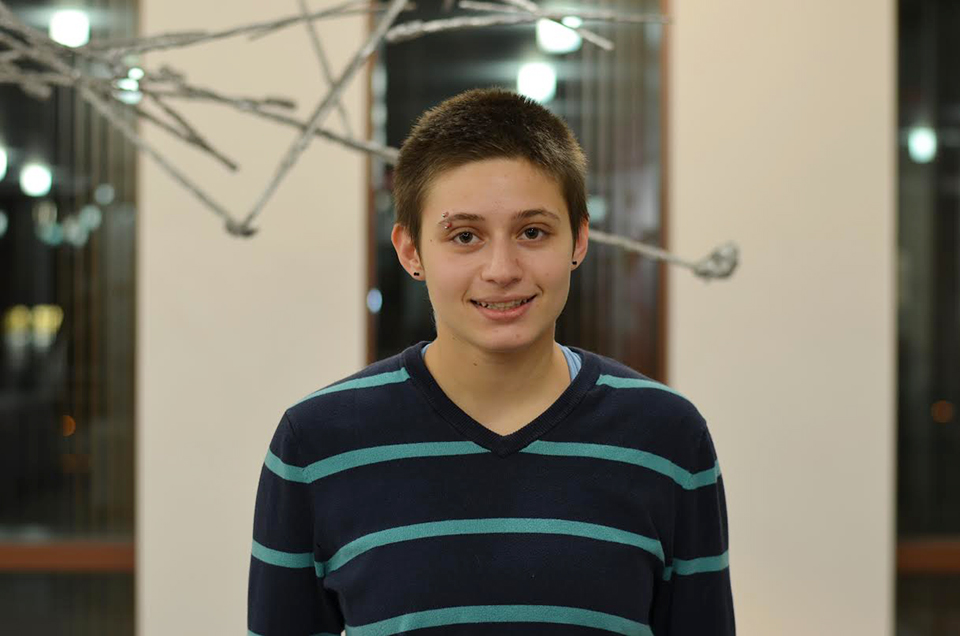 Dylan Kapit, BC 16, is helping lead the push for a trans inclusive admissions policy at Barnard as a member of Students for a Trans-Inclusive Barnard.

A group of Barnard students is asking for student signatures to push the College's board of trustees to formally implement a transgender admissions policy.

Students for a Trans-Inclusive Barnard posted the "statement of support" on Nov. 21, which has received 282 signatures as of Monday night. The document represents the first direct call to action to change Barnard's admissions policy by students who feel that Barnard's lack of a written policy is unwelcoming to trans individuals.

"[W]ithout a written policy on the admission of trans women, Barnard's gates are in effect closed to a group of young women who could benefit most from what Barnard has to offer," the statement said. "We urge Barnard's Board of Trustees to move swiftly to welcome all women to its college on a hilltop."

Dean of Barnard College Avis Hinkson said in an email to Spectator that the administration will examine the issues raised in the document more closely.

"This is an important issue that requires thoughtful consideration, and we are taking the time to fully explore what a policy change would mean for Barnard," Hinkson said. "We are committed to developing a policy that truly reflects Barnard's mission and core values, and equally committed to a process that allows our entire community to be represented, respected, and heard."

Trans-Inclusive Barnard board members Dylan Kapit, BC '16, and Caleb LoSchiavo, BC '15, said that they hope a diverse range of students and student organizations will sign the document to show their support for a formal admissions policy.

LoSchiavo clarified that the document is a "statement of support" rather than a standard petition because the college lacks a policy to change.

"A petition is usually against something that happened, and there's no policy in place right now," LoSchiavo said. "We aren't petitioning against any action that's been taken, because nothing has happened."

After talking about the admissions policy with the Barnard administration, students involved were unsure about administrative thoughts.

"The administration is being as hidden about the whole thing as they possibly can," Kapit said. "They know what we want and they don't like it."

However, Lauren Malotra-Gaudet, BC '15, president of Q and supporter of the statement of support, was optimistic about the administration's receptiveness to student demands.

"The fact that they meet with us and listen to us and talk to us about this issue is really important," Malotra-Gaudet said. "I can't tell if we are gaining traction with administration or trustees for positive support in accepting trans women, but I know that they're thinking about it."

Students interviewed about the circulation of the statement of support this week expressed views that encouraged Barnard to admit trans women.

"It's ridiculous that these applicants aren't being fully accepted as women even though that is what they identify as. Gender is more fluid today and Barnard should accept these students how they want to be seen," Rachel Mulholland, BC '18, said.

"It won't inhibit my education, but instead will create a platform for future dialogue about the rights of transgender individuals in this country," Yasmina Ibrahim, BC '18, said.

LoSchiavo said that the statement is directed toward the board of trustees because they hope convincing the board to support the policy will influence the administration to make this change to Barnard's policy decisions.

"We want them to see that there's a really strong base for Barnard students and alumni who are in support of Barnard adopting a trans-inclusive policy," LoSchiavo said.

Although the most vocal students have expressed enthusiastic support for the acceptance of trans women to campus, many of them also acknowledge how others may feel uncomfortable with a women's college admitting trans women.

"Even if there's someone going to roommate with me, I'm accepting of that," Guo said. "I'm sure there are people who are not entirely comfortable with living with someone who is a transgender student here."

Emy Metzger, BC '18, said that she thought accepting trans women could prove challenging when matching roommates.

Jenna Bergmann, BC '18, also said she understood that some people may not be entirely comfortable with admitting trans students to Barnard, but she expressed the importance of diversity on campus.

"I am a part of an orthodox Jewish community at home, and I know that community would be upset. I understand that certain personal beliefs may not entirely agree with this shift," Bergmann said. "But then again, part of being a Barnard student is embracing diversity, and there's no reason why transgender students should have less of a place on this campus than any other group."

Ana Shindell, BC '18, said that though she thinks trans women should be accepted, creating a policy that allows Barnard to continue as a women's college could be difficult.

"It's actually a really complicated subject because if you accept anybody who identifies as a woman, I think that's good, but at the same time it's really broad," Shindell said. "It could be anybody, and in that case how is it still a women's college."

And according to Kapit, changing definitions are nothing new to Barnard's admissions policies.

"When Barnard was founded, black women were not allowed in the school either," Kapit said. "The definition of women has changed—let's continue to expand it moving forward."