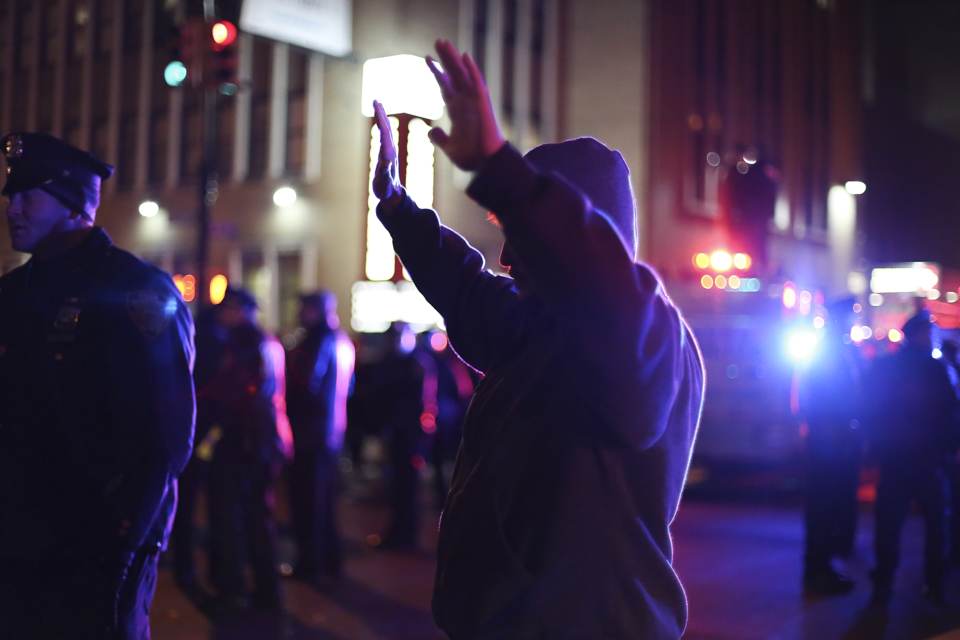 A protester holds up his hands after being penned into a two-block section of Amsterdam Avenue by police.

Police confronted hundreds of protesters in Morningside Heights late Wednesday night as thousands citywide took to the streets in outrage after a Staten Island grand jury's decision in the case of Eric Garner's death.

The nearly 500-strong group was partially broken up after a convoy of police officers, bearing batons and zip ties, penned protesters on Amsterdam Avenue between 112th and 114th streets. Groups that splintered off after being blockaded headed uptown toward 125th Street.

The march was one of several that took place across New York City after a grand jury announced its decision Wednesday afternoon not to indict police officer Daniel Pantaleo for choking and killing 43-year-old Garner last July.

Dozens of students gathered on the corner of 113th Street and Amsterdam Avenue, drawn out of libraries and dorms by the sound of helicopters buzzing overhead. Though several students had been tweeting from rallies across the city, it was unclear how many were in the crowd that was stopped in Morningside Heights.

Third-year Columbia Law School students Nawal Maalouf and Elizabeth Encinas were caught in the midst of police barricades after walking out of Warren Hall on Amsterdam Avenue and 115th Street.

"Honestly, the people were just walking, and the police barricaded them, and told them they were the ones blocking traffic, even though [the police] were blocking off a three-mile radius," Maalouf said. "All I was doing was standing in front of the wall of St. Luke's to take a picture, and this guy [police officer] literally pulled me off by my backpack."

Students and neighbors who gathered on the sidewalks next to the protest chanted, "I can't breathe," a reference to Garner's last words as recorded in a video shot by a bystander.

Protesters said that police had been "herding" them uptown from 110th Street after they marched from East Harlem.

Then, as the marchers on Morningside Drive turned left onto 114th Street toward Amsterdam Avenue, they encountered police from the front.

"As we were turning, they blocked us," Moises Delgado, a Lehman College student from the South Bronx, said. According to Delgado, police arrested at least three people while the march was stalled.

An NYPD spokesperson could not confirm the arrests as of early Thursday morning, though numerous news outlets reported that at least 30 people were arrested citywide on Wednesday night.

"I've been to protests my whole life," Delgado said. "I've never seen them [police] surround a group and deflate it."

According to another protester, police funnelled marchers out of the enclosed block 10 at a time, some using their batons to push protesters.

"The police there were ready to rumble, even though no one was being violent. They had their  batons out. You can tell they prepared, the way they were breaking up that protest," Maalouf said. "It wasn't about them blocking off the protest. It was about them blocking off the protesters, and letting them out a few at a time, to try to take away momentum from the movement. It was a very intentional tactic to repress free speech and assembly."

Upper West Side resident Erin Krackenberg said an officer pushed her out of the crowd with a baton, "through a corral, like a cow would fucking go through, and I ended up falling."

Krackenberg and her husband, Paris, who was let out ahead of her, continued protesting from the sidewalk. Paris was one of several individual protesters walking up and down the enclosed blocks shouting, "Get off my chest, I can't breathe."

"I came out because the situation in this country is so bad that black men are legally allowed to be murdered," he said.

Alex Hastings, BC '16, said she was shocked that the grand jury didn't indict Pantaleo.

After police partially dispersed the crowd on Amsterdam Avenue, a smaller group of nearly 300 people reassembled uptown. They turned right onto 125th Street to march toward the RFK bridge, shouting chants like, "Whose streets? Our streets" and "Hands up—don't shoot."

They were closely followed by more than a dozen police vehicles until Lexington Avenue, where a wall of nearly 100 police officers blocked protesters from continuing toward the bridge. One of the people leading the crowd, Walter Newsome, called on the masses to disperse and regroup the next day.

"This is our city—these are our streets," Newsome said. "No more will we be laid down and murdered."

Protests are scheduled across the city tomorrow—something that marchers on Wednesday night welcomed.

"If the police and the state that clearly backs it decide that black lives aren't worth that much, it's up to us to come out," Delgado said.

"There's too many instances of black men being deemed threatening," Karen Stephens, a protester from the Upper West Side, said. "I'm so glad I don't have sons."

Correction: An earlier version of this story incorrectly identified Alex Hastings, BC '16, as a member of Columbia Prison Divest. Spectator regrets the error.