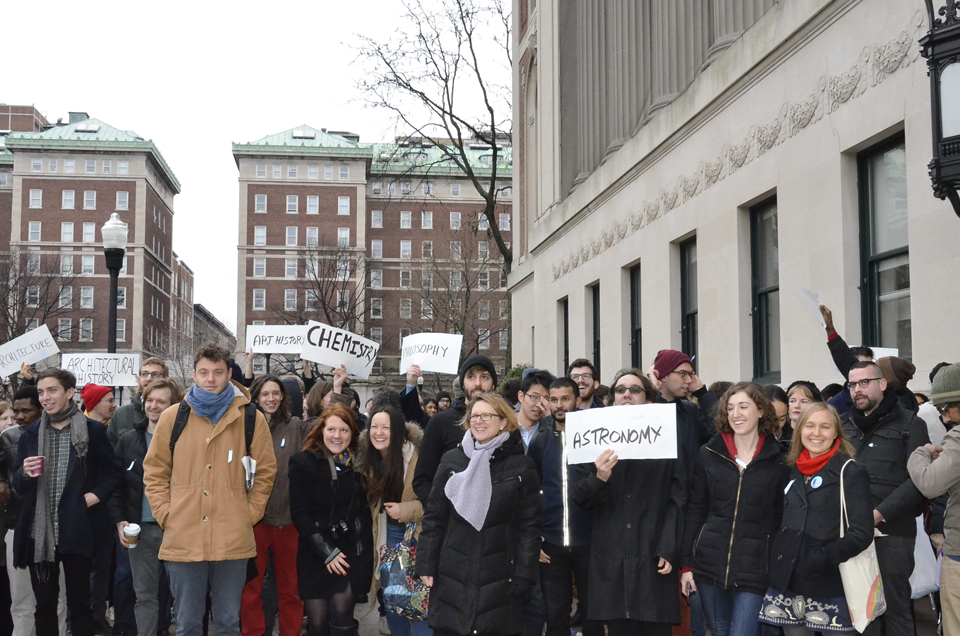 More than 100 graduate students marched from Butler Library to Low Library on Friday afternoon to rally for the University to recognize their union.

Seeking greater rights and recognition for their work as research and teaching assistants, graduate student workers at Columbia are organizing to become a union.

More than 1,700 student workers have signed cards supporting the effort since September. If successful, Columbia will become the second private university in the U.S. to have unionized graduate workers after students at NYU formed a union last fall.

Organizers made a visible demonstration of their efforts on Friday afternoon, when more than 100 graduate students marched from Butler Library to Low Library carrying banners from their academic departments and chanting, "Who are we? The union."

A smaller group entered Low Library to hand-deliver a letter to administrators asking the University to recognize the union, the Graduate Workers of Columbia-United Auto Workers—named so because the students' union is being formed as a subsidiary of UAW Local 2110, which represents full-time clerical workers at Barnard, Columbia, and Teachers College.

"The security we will enjoy when we are able to negotiate the terms of our employment will allow us to take greater pride in the work we do for the university and ensure the integrity of our own education and research," the letter said. "Collective bargaining will make us full members of the academic community and make Columbia University a stronger and more democratic institution."

If Columbia chooses to recognize union, the students will become part of UAW Local 2110. If the University does not recognize them, organizers said they will file a petition seeking certification through the National Labor Relations Board.

A University spokesperson said on Friday that he was checking to confirm receipt of the letter and declined to comment on the unionization effort.

Olga Brudastova, an first-year engineering Ph.D. student at SEAS who also works in the department of Civil Engineering and Engineering Mechanics, was one of those who went into Bollinger's office. She said that while Bollinger was not present, the group delivered a copy of the letter and read it in front of his office staff.

"We hope that they'll respect the choice of the majority of the student workers and they show that respect by recognizing us as workers," Brudastova said. "We're trying to achieve neutrality from the administration so that they do not get in our way to democracy."

Maida Rosenstein, the president of UAW Local 2110, said the union has been involved in graduate student organizing since 2000, including helping to coordinate the NYU campaign. Expanding that to students at Columbia was the natural next step, she said.

"Although it is very different kinds of workers, we all deal with the same employer—Columbia University," Rosenstein said. "We all need a voice on this campus, so that we can address our working conditions, whatever variations there are."

The current campaign at Columbia was inspired by NYU students' move to unionize last year. Organizers started circulating cards among Columbia graduate students this September to gauge the level of interest before seeking formal recognition.

"We wanted to make sure that graduate student workers have had a chance to weigh in about this on their own before going to the administration," said Seth Prins, a fourth-year epidemiology PhD student at Mailman School of Public Health and one of the group's spokespeople.

"The momentum of NYU's voluntary recognition is a big part of why this is happening now at Columbia," Paul Katz, a second year PhD student in the Graduate School of Arts and Sciences, said.

On Friday afternoon, the graduate students who rallied in front of Butler Library said they were hopeful of the outcome.

"We're really excited. We're hopeful that the University will respect our right to unionize and that there will be a positive reaction," Lyudmila Kovalchuke, a fourth year Ph.D. student in GSAS, said.

"This is the outcome of a year's plus work. A lot of graduate students from disparate departments coming together, staking out a principle," said George Aumoithe, a fourth year Ph.D. student in GSAS. "We're very hopeful."