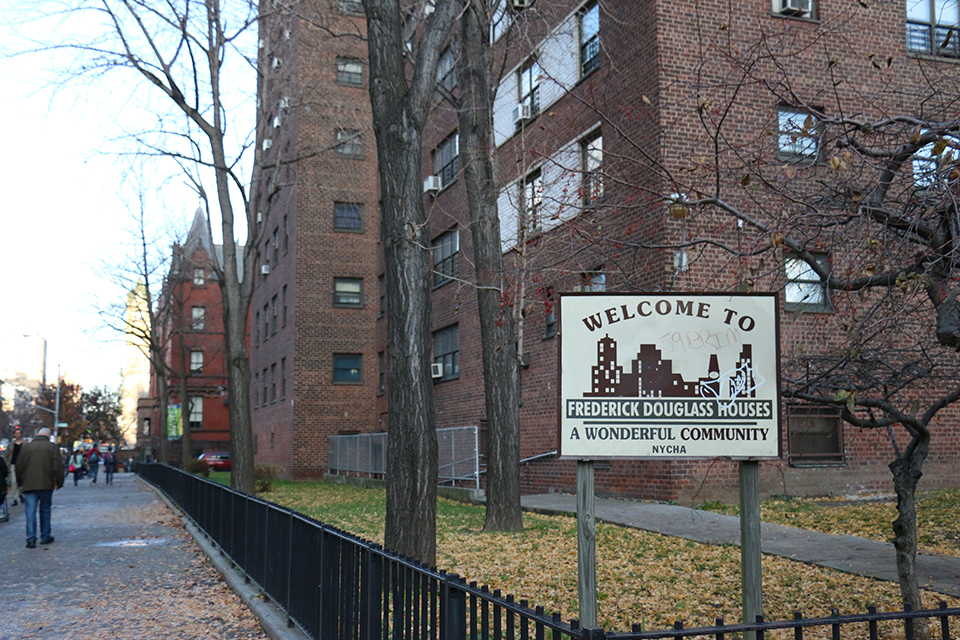 Frustrated with living conditions, residents of the Frederick Douglass Houses filed a lawsuit against the New York Housing Authority

The suit requests that the New York City Housing Court order NYCHA to carry out "permanent and comprehensive repair and remediation of the housing code violations," Satyam N. Bee, a lawyer at King & Spalding, said in an email to Spectator.

The suit alleges that NYCHA has responded insufficiently to repeated complaints by tenants about broken or damaged facilities, as well as rat and insect infestations.

Among the allegations, the lawsuit states that the roof at the Frederick Douglass House on West 103rd Street has serious damage.

Carmen Quinones, the director of the Frederick Douglass House Tenant Association, said the concerns raised in the lawsuit are a daily reality for tenants.

"I'm down here on the ground, and I see this everyday," Quinones said. "Why are they living in these conditions when they pay their rent?"

"It seems like the New York City Housing Authority has money to throw away, and they don't," she added, referencing NYCHA's $18 billion capital shortfall, which has recently become a focus for its administrators.

"We filed all the paperwork, and we are going ahead with the lawsuit, because it seems like that's the only language that the New York City Housing Authority understands," she said.

In 2013, NYCHA was fined $20,000 as a result of a similar lawsuit filed about inadequate facilities in East River Houses in Harlem.

Joshua Bauchner, a lawyer at Ansell, Grimm & Aaron PC and a member of the New 123rd Street Block Association in West Harlem, said NYCHA can sometimes be held less accountable to tenants than private corporations because it is operated by the government.

"NYCHA can kind of hide behind its public identity as a public benefit corporation," he said. "It's state-operated, it's its own animal."

Bauchner is currently representing fellow West Harlem homeowner Christina Robilotto in a similar case about property defects against the Abyssinian Development Corporation, a private developer that has been active in Harlem for decades.

Bauchner said that unless there is a political interest at stake for the governor or mayor to press the issue underlying the Frederick Douglass case specifically, he does not think that the case will be resolved in the courts anytime soon.

"NYCHA can litigate these issues for years, it doesn't cost any more than the salaries of its legal department," Bauchner said. "People on the other side pay attorneys a lot of money in hourly rates and shouldn't expect relief for years."

Lucy Newman, a staff attorney in the Civil Law Reform Unit at the Legal Aid Society, said that whatever the Frederick Douglass Houses tenants' chances of success, legal action against NYCHA may be the best way to get results.

"Given the current situation regarding poor conditions in NYCHA, filing a lawsuit is often the only effective way of getting conditions fixed," she said.

Newman added that once a lawsuit is underway, tenants have to be careful not to give NYCHA a reason to discredit them.

"If tenants withhold rent and then NYCHA sues in a nonpayment case, it is then very difficult for a representative tenant to get repairs made," Newman said.

Newman said that in her experience, it is very common for courts to stipulate that NYCHA has 90 days to act, but often there is little follow-up to ensure improvements are made.

"The tenant just keeps on having to go back to court and sees no results," Newman said. "On one occasion, they might not show up because they have something else to do, and then judges are very keen to just dismiss these cases, which is egregious given the clear history."

Correction: An earlier version of this story quoted Bauchner as saying people on the other side pay attorneys a lot of money in hourly rates and shouldn't expect release for years. He actually said relief for years. An earlier version also stated that Bauchner's case involved facilities maintenance issues. It actually involved preexisting property defects. Spectator regrets the errors.