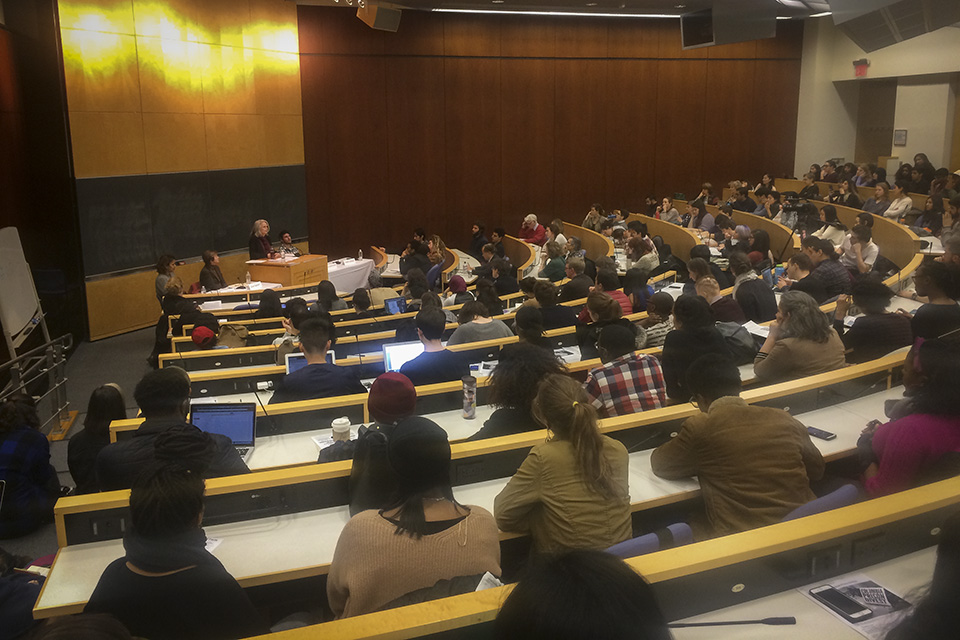 A panel hosted by ACSRI did not include a student representative, which Columbia Prison Divest members said left their voices unrepresented.

Student activists from Columbia Prison Divest say their voices were shut out of conversations leading up to and during a panel on Tuesday night about prison divestment.

The Advisory Committee on Socially Responsible Investing said it hosted the four-person panel to educate itself on the private prison industry. But members of CPD said the event left them unsatisfied with the committee's work and was another example of the group's difficulties in dealing with the committee.

Upon ACSRI's request, CPD provided the committee with recommendations for panelists for the event. ACSRI followed two of the group's three suggestions, but chose not to include a member of CPD. ACSRI instead allotted the group two minutes to speak before a question-and-answer session with audience members.

"We definitely feel that CPD, and more broadly, student voice, is being shut down," CPD member Ella Every-Wortman, CC '16, said. "While the experts on the panel can speak directly to a lot of the facts and statistics about the private prison industry, the student stake in this issue—what it means for Columbia as an educational institution devoted to diversity to be invested in a racist and classist system—is equally important for considering the merits of divestment."

ACSRI Associate Director Katherine Chung declined to comment in an email on why ACSRI chose not to include a student panelist from CPD.

While ACSRI heard directly from CPD at a presentation earlier this year, Every-Wortman said it was important that audience members hear directly from students, since this event was meant to be a community engagement panel. CPD is also circulating a petition to garner student support to add the issue of prison divestment as a ballot initiative during the next campus election.

When ultimately making its recommendation to the Columbia board of trustees on whether to divest from private prison companies, ACSRI Chair and law professor Jeffrey Gordon said in an interview with Spectator that ACSRI will examine three criteria—the views of the Columbia community, the merits of divesting, and whether an awareness of the issue or divestment itself is the most appropriate solution.

Gordon said, regardless of student participation on the panel itself, hosting an event like Tuesday's would allow ACSRI to gauge student support for divestment.

"It's a very useful moment in the committee's deliberation of the divestment petition that the student group will submit to us," he said.

Over 150 students were present at the panel, filling nearly every seat in the room.

Though the panel's timing on the first day of classes seemed to have little effect on student turnout, CPD members said they found the scheduling of Tuesday's panel far from ideal.

"Organizing the panel over break was difficult with so many people on vacation or out of contact," Every-Wortman said. "Doing outreach and publicity for the panel when most students are not yet on campus was also hard, and on the first day of classes people are very busy and not necessarily thinking about extra events."

Chung said in an email to Spectator that she gave CPD three scheduling options for the community panel following the activists' meeting with ACSRI in November 2014.

CPD members have also expressed their frustration with the ACSRI's lack of information on the topic of prison divestment—an issue they say has caused delays in the divestment process.

Every-Wortman said it was expected that ACSRI would do its own research when it began working with CPD.

"We believed [the committee] would take an active role in educating themselves, and we've found that there's been a huge burden placed on us to be responsible for their education," Gabriela Pelsinger, CC '15, said.

CPD members were asked to present to ACSRI for the second time in November, and again to Jeffrey Gordon after his appointment as chair.

Looking forward, CPD hopes ACSRI will soon make a recommendation to the Columbia board of trustees to divest from prison companies, but Gordon said there is currently no set time frame.

Pelsinger, however, said Columbia has no time to waste.

“It's been nearly a year now [since CPD has been working toward divestment],” she said. “We want action yesterday.”
giulia.olsson@columbiaspectator.com | @ColumbiaSpec
Graphic by Anna Alonso Palmer
Correction: An earlier version of this story misspelled Gabriela Pelsinger's first name in one instance. Due to an editing error, the article and graphic previously stated that ACSRI delayed the meeting for a year, though ACSCRI and CPD have been meeting regularly. Additionally, a previous version stated that CPD pushed for the hearing panel. In fact, panels are part of ACSRI's process in determining whether to recommend divestment. Spectator regrets the errors.
Columbia Prison Divest board of trustees Advisory Committee on Social Responsible Investing