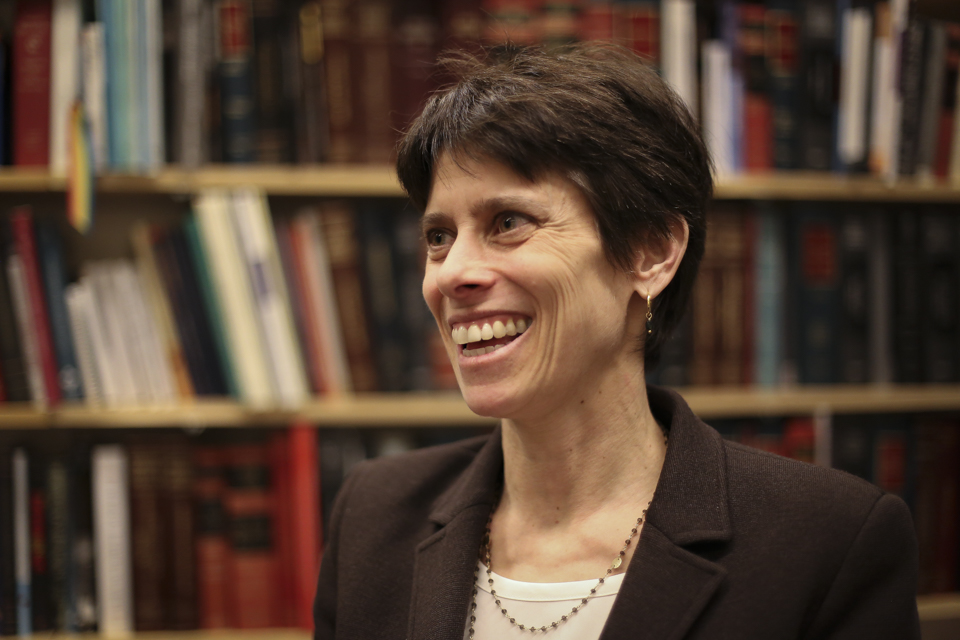 Suzanne Goldberg, who has served as University President Lee Bollingers special advisor on sexual assault and prevention and response since July, will be the first executive vice president for University life.

Suzanne Goldberg, who has served as University President Lee Bollinger's special advisor on sexual assault prevention and response since July, will be the first executive vice president for University life.

Goldberg takes on the role almost 10 months after it was created as the executive vice president of Student Affairs. Goldberg said the position's new name more accurately reflects her vision for the job.

"I think the decision was not to take out 'student' but to encompass students within University life," Goldberg, who also serves as the Herbert and Doris Wechsler clinical professor of law and director of the Center for Gender and Sexuality Law, said in an interview. "And this role aims to bring students from across the University directly in conversation with the ideas of this great University in collaboration with faculty and administrators."

Goldberg, who will retain her roles as special advisor to Bollinger and professor at the Law School, said that at other schools, student affairs positions tend to focus on operations, whereas she will prioritize promoting "cross-University" conversation on campus issues and ensuring that the office will serve as a point of contact for students to raise University-wide concerns with administrators.

"In any setting, a title or a name of an office communicates important information about the vision for that office," Goldberg said. "And University life—importantly and necessarily—has students as its centerpiece."

Abby Porter, CC '17, vice president of communications for Columbia College Student Council and prevention coordinator for the Coalition Against Sexual Violence, said she was worried that the wider scope of University life would limit student interactions.

CCSC President Peter Bailinson, CC '16, said that he nervous that the new title could mean a shift away from student needs.

"A lot of students I talked to were very excited about student life being expressly in the original job position to show that the upper echelons of Columbia are taking student concerns seriously," Bailinson said. "I'm nervous for what the implications are. I've yet to understand what the merits of 'University life' are as opposed to 'Student Affairs.'"

Goldberg acknowledged that some might be concerned that the role—conceived to be the first entirely student-facing position in the president's office—no longer has "student" in the title.

"Students are welcome to be concerned, and I want to give my assurance that the office is centrally aimed to serve students within a broader University community," Goldberg said. "My hope is that students will recognize that this vision actually adds a lot of value to student life at the University."

Though the creation of the office of the EVP of Student Affairs was announced last year and Columbia opened a national search to fill the position with Storbeck/Pimentel & Associates, Goldberg said that she was not looking to fill the position when she was named special advisor this summer. As special advisor, Goldberg found herself tasked with helping determine the structure of the new office.

As the president's special advisor on sexual assault, Goldberg worked on revising Columbia's sexual assault policy, oversaw the release of the first report of anonymous, aggregate data on how the University adjudicates sexual assault, and announced a University-wide bystander-intervention training initiative.

Though many student activists from groups like No Red Tape and the Coalition Against Sexual Violence have praised Goldberg's commitment to responding quickly to them, criticisms emerged surrounding the release of the new gender-based misconduct policy and the aggregate data on sexual assault adjudication. Activists said they were "deliberately excluded" from the revision process of the policy and that the report did not release enough specific information on sanctioning.

Goldberg said that the EVP role will continue to evolve, but she expects to plan and implement initiatives and programs around issues including sexual respect, race relations, and civil rights—some of the most visible issues on campus last semester.

Columbia Queer Alliance President and member of the Coalition Against Sexual Violence Caitlin Lowell, CC '15, said she hopes that Goldberg will have more time to work on sexual assault policies on campus than she did as special advisor.

"She seemed to have a lot on her plate between teaching classes and fulfilling her special advisor role," Lowell said. "Hopefully, in her new role as EVP, professor Goldberg will be able to speed up the time frame and extensive nature of important reforms like continuous consent education. In this role, she clearly has the institutional power and backing to prioritize University reform."

Goldberg said she is planning to assemble working groups of students, faculty, and administrators to develop programming. She also said that there will be other methods for students to communicate with her office.

"This is an office in development, and it will be growing over the course of the semester and coming year in response to community ideas and needs," Goldberg said. "I think the goal really is not to come in with preformed set plans and rather to have community participation."