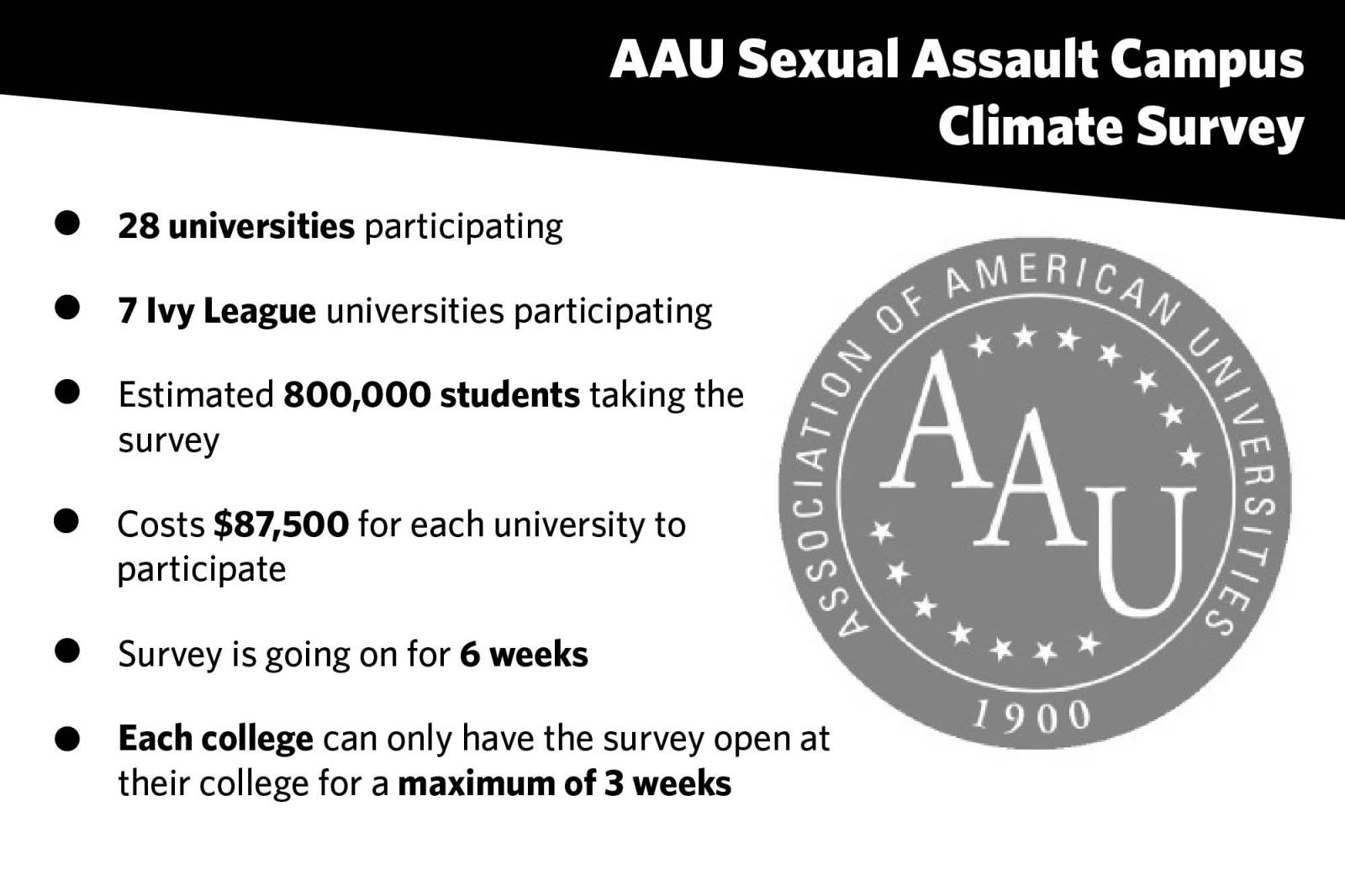 The University will be administering the web-based survey by the Association of American Universities.

Two campus climate surveys about sexual assault and harassment will be administered to undergraduate and graduate students at Columbia later this spring. Barnard students will not be asked to participate.

The University will be administering the web-based survey by the Association of American Universities. While not required, students will be asked yes-and-no questions and fill out number scales on whether they have experienced different forms of gender-based misconduct during their time at Columbia.

The survey is expected to take 20 to 30 minutes, with follow-up questions for those who answer "yes" to any of the questions.

"We hope that they [each university] will be able to use their institutional data, so they can format policies and practices that help make students safer and help them feel safer," Barry Toiv, Vice President for Public Affairs at AAU, said. "That was our primary goal."

The Association of American Universities will release anonymous, aggregate data of all participating universities to the public, while individual schools will receive their own data next fall. Though there is no mandate that schools release their own figures, administrators have agreed to make the Columbia data public.

Last fall, 61 scientists signed letters to the presidents of AAU universities, citing concerns about schools paying for the survey without seeing it first and urging them not to participate.

Though the AAU questions have not been released publicly, some activists and elected student representatives— including member of No Red Tape, Becca Breslaw, BC '17,—were given access to survey questions ahead of time in order to provide feedback.

In addition to the AAU survey, Columbia will conduct a supplemental survey, which will be more specific and include free-response questions, according to Breslaw.

University of Oregon psychology professor Jennifer Freyd said she was concerned that the methods the AAU will use to try and get students to participate, which include social media and email blasts, could be potentially triggering to survivors.

While a spokesperson for the AAU said the questions for the survey have not been finalized, Freyd said the version of the survey she's seen starts with questions about sexual violence by physical force, which she believes to play into the misconception that sexual violence is most often committed by strangers.

A University spokesperson said that questions on the survey are specific and use law-based definitions of each act of sexual violence—thus allowing students to more accurately report their experience.

While the purpose of the surveys is to collect data for the student body, Columbia student activists say they worry about whether the University will follow through with this release of the data.

One of the organizers of the Coalition Against Sexual Violence, Sejal Singh, CC '15, said she worries this data will be treated the same way as Columbia's last release of aggregate data in September.

"The release of that data was delayed for months, a lot of that [the data] wasn't included," Singh said. "That does set a worrying precedent for me."

Activists at Columbia say they hope the University will follow the lead of George Washington University, which recently released data from their own climate survey, and did so in a quick and comprehensive manner.

Activists said they worried, the University would delay the release of survey data, but were hopeful that past delays would not be repeated.

"There is a precedent for doing that [releasing the data] which might encourage Columbia to do it faster," Michaela Weihl, BC '17 and member of No Red Tape, said. "They've seen what happens when they don't release it. A lot of students made a lot of noise until they did. It would be, in my opinion, in their best interest."

Still, activists also said these surveys are a step in the right direction.

"Campus climate surveys are incredibly important," Singh said. "I think they're important for us to be evaluating where work needs to be done."