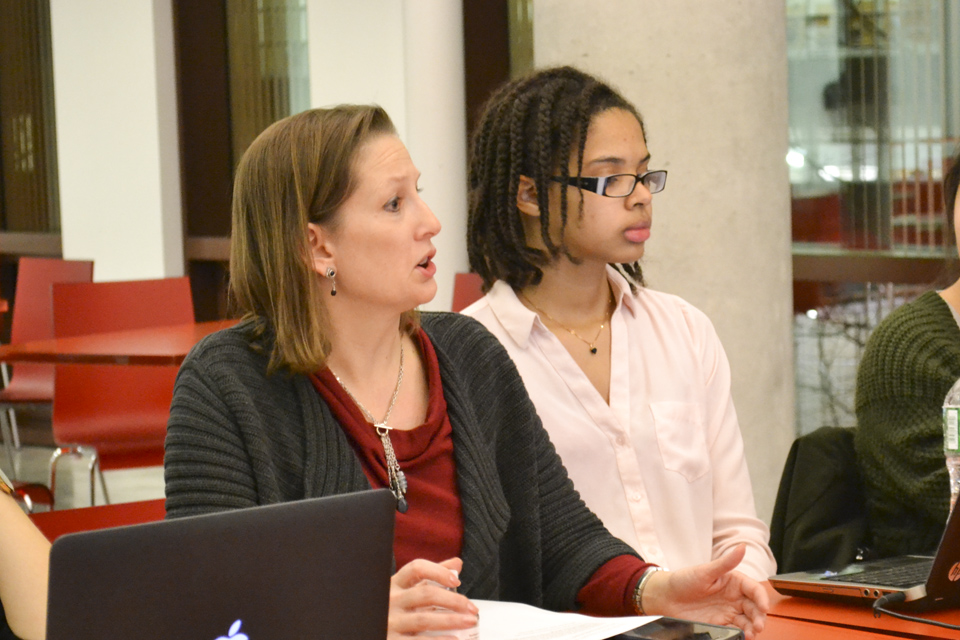 Associate Dean for Equity Amy Zavadil said at Monday nights SGA meeting that Barnard would not be requiring its students to go through a sexual respect education program.

Barnard will not require its students to participate in Columbia's mandatory sexual respect education program until administrators have more information about this initiative, Dean for Equity Amy Zavadil said at Monday night's Student Government Association meeting.

Zavadil said she and Barnard Dean Avis Hinkson decided last semester they needed more information about the requirement's content and implementation before making it mandatory for Barnard students. However, Barnard students will be able to opt into Columbia's program this year.

The program, which has been described to resident advisers and student government members in meetings over the past two weeks, will require all Columbia students to participate in one of five prevention education options before spring break.

"It seemed premature to require something that took a hold on registration or a hold on a diploma, because we didn't feel we had enough information," Zavadil said at the SGA meeting.

Both Hinkson and Zavadil were invited to participate in a working group that began meeting last semester to research and draft the prevention program—which is set to be announced later this week—under new Executive Vice President for University Life Suzanne Goldberg.

"We really want to understand better, not just what's being offered, but how it's being received by the students," Zavadil said, "so that we can make a plan moving forward about how to ensure ongoing communication and ongoing prevention education in a way that reaches a broad array of students but is not unnecessarily burdensome."

Zavadil said that Barnard will be soliciting feedback from students on prevention initiatives, hosting prevention education workshops on its campus, and taking note of how many Barnard students choose to participate in Columbia's education program.

"That [number] is going to inform what we need to do moving forward, but we're absolutely committed to making prevention education widely available and a part of the fabric of what we offer," she told Spectator after the meeting.

No Red Tape member Michela Weihl, BC '17, who also served as part of Goldberg's working group, said that Barnard and Columbia should be treating the issue similarly because they have such a close relationship.

It's "ignoring the fact that there's so much overlap between the two schools," Weihl said. "Socially and romantically and academically, students are mixing all the time."

Weihl said that after the working group met twice, Zavadil told her that the program would not be extended to Barnard students because of the college's distinct climate.

"The working group was totally ready to provide these workshops for Barnard students—that was not the issue," Weihl said. "She [Zavadil] said that if you require people to take classes, they're not going to learn as well, and she thinks that Barnard students don't need it as much as Columbia students do."

Weihl added that, as a women's college, Barnard is in a unique position to address issues of sexual violence.

"Though people of any gender and all genders can experience and perpetrate sexual violence, it is rooted a lot in patriarchy and conceptions of gender," she said. "I want to see community-citizenship education that parallels First-Year English, parallels the Nine Ways. Whatever that looks like, I wanna see this required forever."